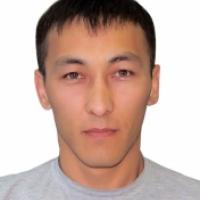 When and where did you begin this sport?
He began Para dance sport in 2012.
Club / Team
Nur-Sultan Youth Para Sports School: Kazakhstan
Name of coach
Aliya Tusupbekova [personal], KAZ

Sporting philosophy / motto
"Dancing is one of the most beautiful sports, and if a person wants to do dancing, then he must pull himself up and try." (sports.kz, 09 Apr 2016)
Awards and honours
He has received the title of Master of Sport of International Class in Kazakhstan. (kazdancesport.kz, 06 Aug 2019)
Impairment
In 2006 he suffered a fracture to his spine in a car accident. (ru.sputniknews.kz, 12 Mar 2019; baigenews.kz, 03 Jul 2018)
Other information
INVENTOR
He has invented a unique wheelchair washer that was installed in the national Paralympic training centre. At the time he was working on the service maintenance and repair of equipment for the impaired at the DOS Independent Life Centre in Nur-Sultan, Kazakhstan. (ru.sputniknews.kz, 12 Mar 2019)

DOCUMENTARY
He was one of the main features of the 'Astana Is Me' documentary filmed by Russian producer Valery Spirin in commemoration of the Kazakhstan capital's 20th anniversary. (baigenews.kz, 03 Jul 2018)