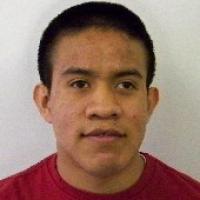 Why this sport?
He had a love for running and passion for competition, so when he attended the 2008 Paralympic Games in Beijing as a spectator he was inspired to try and become a Paralympian himself.
Club / Team
Georgia Southern University: Statesboro, GA, USA
Name of coach
Franz Holmes [club]

Sporting philosophy / motto
"Where there is a will, there is a way." (Facebook profile, 23 Apr 2017)
Awards and honours
He was named a 2011 US Paralympics Track and Field High School All-American in the 200m and 400m. (teamusa.org, 06 Sep 2011)
Ambitions
To compete at the Paralympic Games. (genmaspeaks.blogspot.com, 13 Apr 2013)
Other information
OTHER STUDIES
He has also studied music recording industry at Middle Tennessee State University. (Facebook profile, 23 Apr 2017)

FROM MEXICO TO THE US
In 1995 he was abandoned at an orphanage in Toluca, Mexico. He was too young to remember his parents or when he was born, so the orphanage assigned him a birthday. In 1998 he and his older brother Eric were adopted and moved to Philadelphia, PA, United States of America. He went on to live with several families in the US after being put up for adoption again. (genmaspeaks.blogspot.com, 13 Apr 2013)