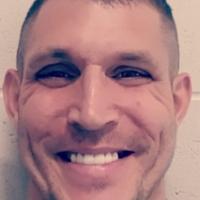 When and where did you begin this sport?
He took up Para athletics in 2017.
Why this sport?
He used the sport as a way to overcome his impairment and personal problems.

Hobbies
Yoga. (Facebook page, 20 Nov 2017)
Ambitions
To compete at the 2020 Paralympic Games in Tokyo. (the-daily-record.com, 22 Jul 2017)
Impairment
His left hand was amputated due to compartment syndrome, brought on by drug abuse. The condition occurred because of a prolonged lack of circulation to his hand. (the-daily-record.com, 22 Jul 2017)
Other information
BEATING ADDICTION
He suffered a back injury while at college, which led to him being prescribed powerful pain medication that he eventually became addicted to, leading to depression, illness, and eventually prison. "I was trying to work, but I was so into my addiction. I lost focus on what was important and I couldn't operate without [the medication]. My addiction was horrible. I wanted help and I knew I needed help." In June 2014 he stole a variety of narcotics from a pharmacy in Berlin, OH, United States of America, resulting in him being charged with robbery. While out on bail, he passed out due to drug use and woke up with a constant tingling feeling in his left hand. He was diagnosed with compartment syndrome, caused by a prolonged lack of circulation to his hand. Over the space of a month he lost the use of his hand, leading to him having it amputated. Shortly after, he was given a two-year prison sentence for robbery and attempted robbery. He underwent a detox programme, and after one year in prison he was released. Eight months later he received his first prosthesis. "You shouldn't have to lose part of your body and rob a pharmacy to get sober. I just needed a way to cope. You need to find a healthy alternative. Find something you like to do. The struggle to stay addicted is harder than not. It's taken me a long time and I'm not finished, but I'm so excited about life and I have to be patient." (the-daily-record.com, 22 Jul 2017; amazon.com, 2017)

AUTOBIOGRAPHY
In 2017 he released an autobiography titled 'Pills, Prison, and the Paralympics' about his journey from a broken, violent home to his addiction problems and prison, and finally how sport helped turn his life around. (amazon.com, 2017)

OTHER ACTIVITIES
He serves as a spokesperson for prosthetic hand manufacturer Bebionic. He also volunteers as a mentor for other people who have undergone amputations and struggle to overcome their impairment. (the-daily-record.com, 22 Jul 2017)