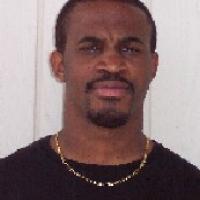 When and where did you begin this sport?
He started powerlifting in 2005.
Name of coach
Stanley Redwine
Coach from which country?
United States
Training Regime
He practises every day with members of the Kansas University track team.

Hobbies
Skiing, travelling, going out to dinner, playing games, watching American football. (ossur.com, 12 Nov 2011)
Memorable sporting achievement
Being named to the 2011 world championship team. (ossur.com, 12 Nov 2011)
Awards and honours
He was the first Iraq war veteran to qualify for the U.S. paralympic team. (telegraph.co.uk, 23 May 2009)
Other sports
He also participates in the 100m Sprint event. (telegraph.co.uk, 23 May 2009)
Other information
TRAGEDY
He was employed as an army combat medic and stationed in Iraq in 2005. Five days after he was meant to be discharged from the Army and back home he was still in Iraq due to a government "stop-loss" order.On the 21st of February he went to the aid of a fallen comrade whose Humvee had been hit by an insurgents bomb off a dirt road outside of Baghdad. He was preparing the soldier for helicopter evacuation when a second bomb killed three of his fellow medics and took his right leg from above the knee. (usatoday.com, 20 Nov 2006)

RUNNING AGAIN
"I had tried it for a few strides before that moment, but I had never gone full speed," he said about the first time he ran after his accident. "I took off down the track, and it was the most wonderful feeling, the wind in my face, moving by my own power." (usatoday.com, 20 Nov 2006)