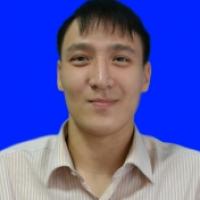 When and where did you begin this sport?
He began competing in the sport in 2012.
Why this sport?
He was a singer and was spotted at a concert by Kazakhstani Para dancer Tolganay Turebekova who invited him to perform with her. "As a child, I could not imagine that I would become an athlete. I thought that I would sing on stage and now I can not imagine my life without dancing."
Club / Team
Taraz Para Sports Club: Kazakhstan
Name of coach
Fakiya Shikhova [personal]; Mukhan Kuanyshbayev [personal]

Memorable sporting achievement
Finishing in seventh place in the C2 / 5D combi Latin mixed dance at the 2014 Asian Para Games in Incheon, Republic of Korea. (ztgzt.kz, 24 Jun 2019)
Sporting philosophy / motto
"I think that no obstacle can stand in the way of a dream, and even limited physical abilities are not a reason to give up." (ztgzt.kz, 24 Jun 2019)
Awards and honours
In December 2014 he won the Kazakhstan national Zhan Shuak award in the nomination "For Outstanding Achievements of People with Disabilities in the Field of Wheelchair Dancing." (nurotan.kz, 05 Dec 2014)

In November 2014 he won the annual Kaisar Tulga national award for athletes with impairments in the "Overcoming" nomination. (paralympic.kz, 19 Nov 2014)
Impairment
At age 17 he fell from height and broke his spinal cord. (z-taraz.kz, 09 Oct 2014)