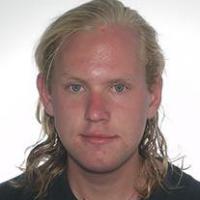 When and where did you begin this sport?
He first tried athletics in 2000 in Jankoping, Sweden.

Most influential person in career
His parents and coach Ronny Kvist. (expressen.se, 21 Apr 2014; Athlete, 22 Oct 2015)
Hero / Idol
Estonian discus thrower Gerd Kanter. (Athlete, 22 Oct 2015)
Injuries
He injured his knee in March 2015 while at a training camp in Tenerife, Spain. He did not return to training until two months later. (hd.se, 28 Jul 2015)
Sporting philosophy / motto
"Do the job required." (Athlete, 22 Oct 2015)
Impairment
As a youth, he suffered from headaches. Doctors eventually found a tumour on his brain, and he underwent surgery to remove it at age 14. However, he had a brain haemorrhage three days later that resulted in paralysis on the left side of his body. (expressen.se, 21 Apr 2014)
Other information
OTHER STUDIES
He has also studied for a degree in sports science at Halmstad University in Sweden. In January 2018 he began studying for a degree in physiotherapy at Linkoping University in Sweden. (Facebook profile, 27 Jan 2020)

OCCUPATION
He works as a physiotherapist and massage therapist at Vikens IK in Sweden. He also works as a coach at Hoganas Athletics Association in Sweden. (Facebook profile, 27 Jan 2020)

OTHER ACTIVITIES
He has served as chairman of Hoganas Athletics Association in Sweden. (Facebook profile, 27 Jan 2020)