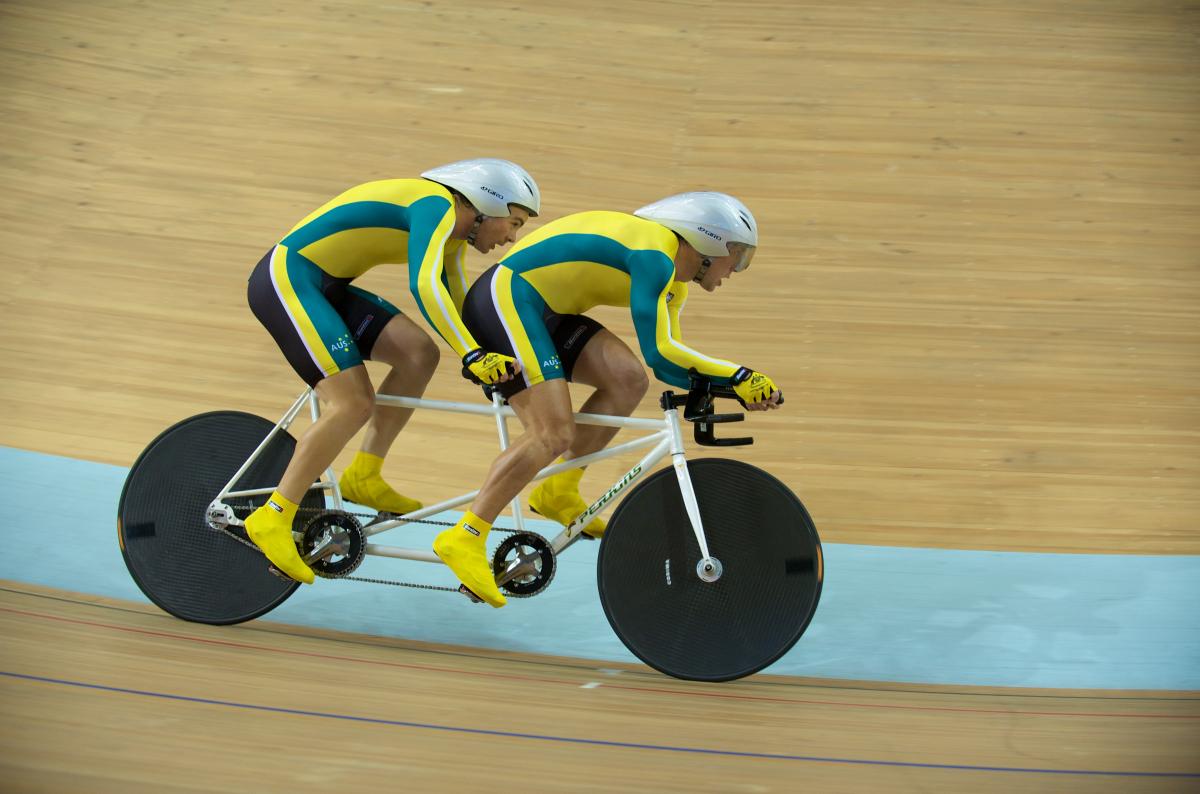 The Australian Para-Cycling Team in action during the 2008 Beijing Paralympic Games.

“I’m confident this cycling team is one of the strongest Australia has ever produced for a Paralympic Games."

Paralympic tandem Para-Cycling legend Kieran Modra has earned the chance to spearhead the Australian Para-Cycling team at the London 2012 Paralympic Games, having overcome the injuries he sustained in a horrific crash late last year.

The Australian Paralympic Committee (APC) revealed the 15-strong Para-Cycling team for London 2012 at the Adelaide Superdrome on Tuesday (12 June), in an announcement attended by Modra and sighted pilot Scott McPhee, Felicity Johnson and pilot Stephanie Morton and Sydney’s Jayme Paris.

In what will be one of the most highly anticipated sports at London 2012, Para-Cycling is also one of Australia’s most successful. Since it was introduced as a Paralympic Sport at the Seoul 1988 Games, Australia have won 28 gold, 20 silver and 22 bronze medals.

Five athletes from the 2008 Beijing team will feature again in London.

“I’m confident this cycling team is one of the strongest Australia has ever produced for a Paralympic Games,” said APC Chief Executive and 2012 Team Chef de Mission, Jason Hellwig.

“There is a tremendous amount of talent in this team and each athlete is looking in top condition. At the Track World Championships earlier this year, Australia won seven gold medals – four of them won by athletes new to this team.

“If that is any indication as to the strength in the team then I think we can expect a number of podium finishes in London.”

It will be Games number seven for Modra, who first competed at the Paralympics at Seoul 1988 in Athletics. Changing to swimming for the Barcelona 1992 Games, Modra made his Paralympic Para-Cycling debut at Atlanta 1996.

Having recently returned to training following a serious accident late last year that almost cost him his life, the big South Australian said he was grateful to be named in the team.

“My whole world turned upside down physically and mentally in a flash,” Modra said. “In the back of my mind I was still focused on getting to London, but I knew I was in pretty bad shape. I knew my chances were very slim but I didn't give up.

“Every Games is different and I never tire of the electrifying atmosphere the Games generates.”