Slew of countries pick up medals on Day 7 of London 2012 in wheelchair fencing competition. 05 Sep 2012
Imagen 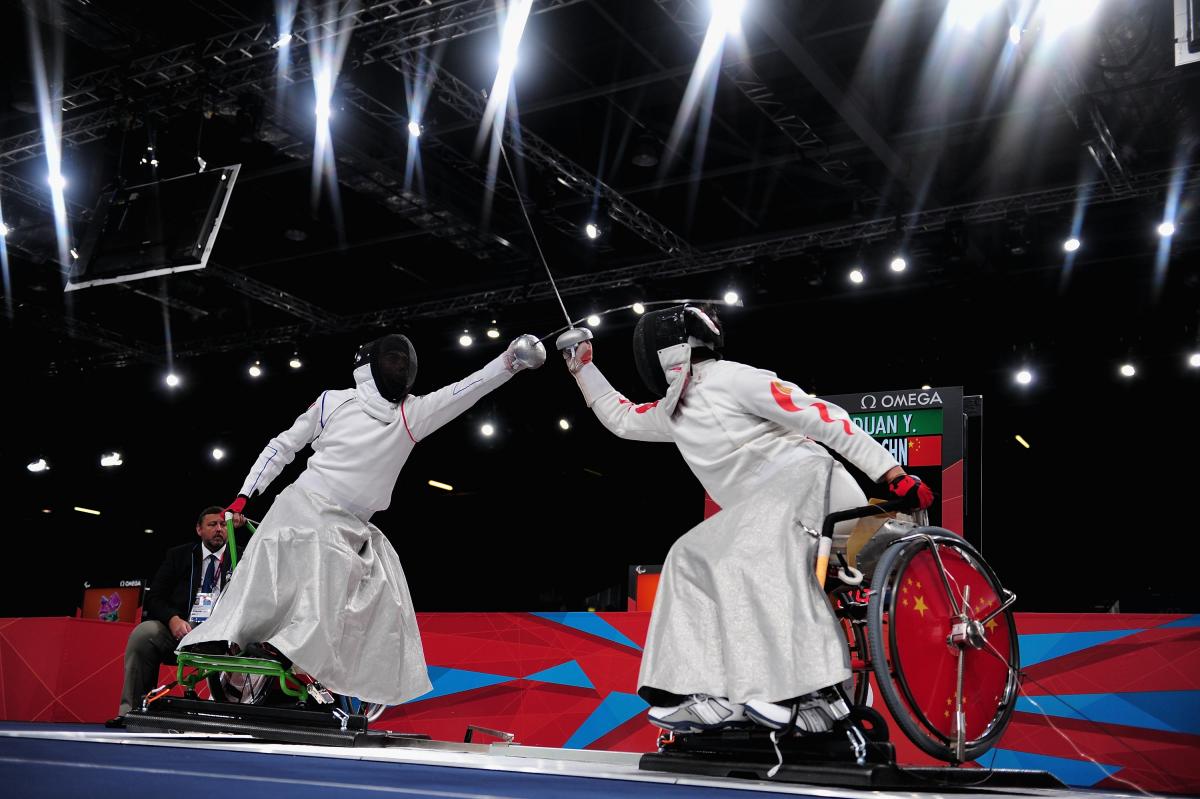 It was up to Hong Kong and co. to put a stop to the Chinese gold rush in wheelchair fencing on Wednesday (5 September).

In the men’s individual epee category A, second-seeded Romain Noble cruised through his pool and was the instigator in the first Chinese defeat of the night. He put in a composed performance to beat Duan Yan Fei and step into the semi-finals.

Dariusz Pender’s quarterfinal against Paralympic holder Tian Jianquan was a tasty affair. Full of attacking play it was a masterful epee display, but it was Pender who had the class to deny the Chinese athlete his second successive final, winning 15-11.

Elsewhere, Matteo Betti beat Andrii Demchuk of Ukraine and the foil quarter-finalist, Artur Yusupov made sure he would be competing for a medal with victory over Robert Citerne.

Pender faced Yusupov in the semis. The Russian pushed the favourite all the way, with the two exchanging hits to 14-14, with Pender pouncing to have the last laugh and win the bout.

Contrastingly, Nobler was commanding against Betti. The Italian went on to take bronze, but it meant the top two seeds would meet for their inevitable gold medal bout.

Both fencers demonstrated their intent from the start, but it was Pender who was landing the crucial hits. He controlled the tempo of the exchanges, frustrating Noble, and punishing the opportunities presented to him to wrap-up gold 15-9.

Hu Dao Liang won the foil event yesterday, but the reigning Paralympic champion was undone by a terrific attacking display from Hong Kong’s Tam Chik Sum in category B.

"I felt very relaxed - I didn't think too much,” Sum said.

There was also an upset for Marc-Andre Cratere as the second seed fell short against Jovane Silva Guissone of Brazil. The Brazilian then went on to dispatch his second French victim, Alim Latreche to book his place in the final, where he would meet Sum.

Latreche confirmed France’s first fencing medal of the games, but it was all about an extraordinarily passionate and inspired performance from Guissone. The Brazilian’s performances throughout the tournament had been gaining momentum with each fight, resulting in a pulsating crescendo to take the gold. The women’s individual epee category A was a tame affair in comparison, as the four big names all made it though to the semis unscathed.

In the first semi-final, Zsuzsanna Krajnyak showed no signs of letting her form slip as she punished errors by Alla Gorlina to progress, 15-5.

Many would have liked Yu Chui Yee and Wu Bai Li to contest the final.

Nevertheless, Hong Kong’s Yee was determined to book her place in the final after a silver in Beijing, and she did just that, denying the Chinese another chance for gold.

Wu claimed bronze and the final was a chance for Krajnyak to double her medal total.

Instead, Yee, stormed into an early 9-3 lead before consolidating her position by controlling her Hungarian opponent with some well-measured and patient play before sinking the final blow to take gold.

In category B, there was an early slip up for Chan Yui Chong that set the tone for the rest of her tournament.

In the quarters Thailand’s Beijing bronze medalist, Saysunee Jana overcame Poland’s Marta Markowska. There was another nervous display from defending champion Chong, but second seed Simone Briese-Baetke showed no sign of nerves to book her place in the semis. Liudmila Vasileva over came Tetlana Pozniak to claim the fourth semi-final spot.

Chong looked lethargic after the foil competition and a semi-final against Jana, the current world champion, condemned Chong. The 15-14 score-line flattered Chong, who went on to take some consolation in the bronze medal.

Briese-Baetke stood in the way of Jana and her inevitable gold medal. She easily dispatched the No. 2 seed to clinch the Paralympic title and leave the Thai supporters in ecstasy.