Jody Cundy, as well as Sarah Storey, both swimmers turned cyclists, will look to repeat as Paralympic champions for Great Britain at London 2012. 19 Jul 2012
Imagen 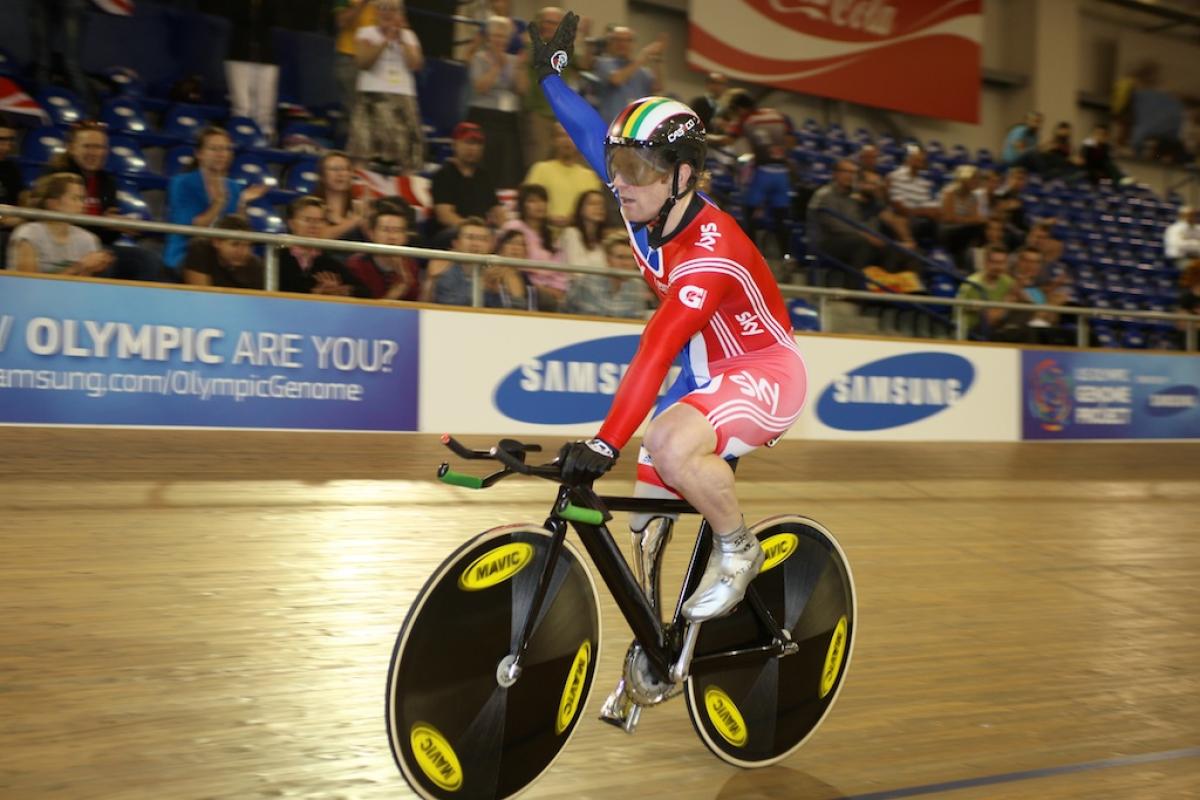 “It was always an ambition to win one, but to win as many as I have, five Paralympic golds now, you can never imagine that. Here I am, going into a home Paralympics as one of the favourites. It’s quite a good place to be.”

Great Britain came away with 17 Para-Cycling golds from the Beijing 2008 Games – 12 more than any other nation.

Together, Jody Cundy and Sarah Storey – both part of a select group of Paralympic champions in multiple sports – won four of those golds.

The swimmers turned cyclists are now expected to lead the British squad at London 2012 when they compete in their second Games on the bike.

At this year’s Paralympics, Cundy will compete in the 4km individual pursuit, 1km time trial and team sprint, trying to defend his title in the time trial.

Storey, who has racked up 18 medals between Swimming and Para-Cycling at six Paralympics, will compete in the 500m time trial and 3km individual pursuit at the Velodrome and the road time trial and road race at Brands Hatch.

From the pool to the bike

Cundy and Storey’s journeys are quite similar in that they both swapped their swim strokes for a bike.

Storey made the transition first in 2005 and Cundy followed suit in 2006. The last major international swim meet for both just happened to be the Berlin Open.

“It’s kind of funny that we both made this transition without really consulting with each other,” Cundy said. “We just kind of picked up the sport, and the next thing we know, we both kind of made that transition and we were on the squad.

“It’s quite a nice lifestyle if you can get it. Swimming used to be my life, and then in 2006, I made that transition to the cycling team, and it’s extended my career.”

For 33-year-old Cundy, a Manchester native, it is about taking everything in his stride. He was born with a deformed right foot that was amputated when he was 3 and replaced with a prosthetic leg.

Fast-forward to today, and his sporting career includes 23 Swimming international medals – 14 of them gold – and a list of Para-Cycling medals that is constantly being added to.

“I get to look after them for about a year, and then when the interest for those medals wears off they get to proudly display them at home with my parents,” Cundy said.

“It was always an ambition to win one, but to win as many as I have, five Paralympic golds now, you can never imagine that. Here I am, going into a home Paralympics as one of the favourites. It’s quite a good place to be.”

Since February’s 2012 UCI Para-Cycling Track World Championships in Los Angeles, Cundy has transitioned his training to be more endurance focused.

He has not competed in any major international events but attended an altitude training camp and has been strictly following an endurance building-block schedule that is tailored to the individual time trial race on the track.

The C4 class for athletes with a below-the-knee amputation will be one of the toughest in Para-Cycling at London 2012, as it also includes Jiri Jezek and Jiri Bouska of the Czech Republic and Carol Novak of Romania.

Cundy is most looking forward to the team sprint, assuming he will be selected to compete in the event when the squad for the race is decided in August.

The British sprint team defeated the Chinese on their home soil at the Beijing 2008 Games, but China won the most recent matchup by less than half a second at this year’s World Championships in Los Angeles.

“We did beat them in Beijing on their home track four years ago, so I think they’d probably like to reciprocate and do the same to us in London,” Cundy said. “It’s going to be a great race and hopefully it will be us and the Chinese in the final head-to-head.

Cundy is also very excited about a new leg he is working on with designers that will be tailored to his supporters for London 2012. He has been known for wearing different coloured legs, including one with the winning rainbow bands.

It is all just part of a journey he wants to make when the Paralympics arrive in his home country at the end of the summer.

“Any Paralympian or Olympian, to represent their country is pretty impressive at the Paralympics or Olympics, but to have that opportunity to do it at a home Games is something that dreams are made of,” Cundy said.

“To be in the prime of my career as well, that just adds to it.”