No. 36 Beatrice Vio fences to gold after studious hiatus

Having concentrated on schoolwork rather than wheelchair fencing in early 2014, Italian prodigy Beatrice Vio returned to win two titles at the European Championships. 26 Nov 2014
Imagen 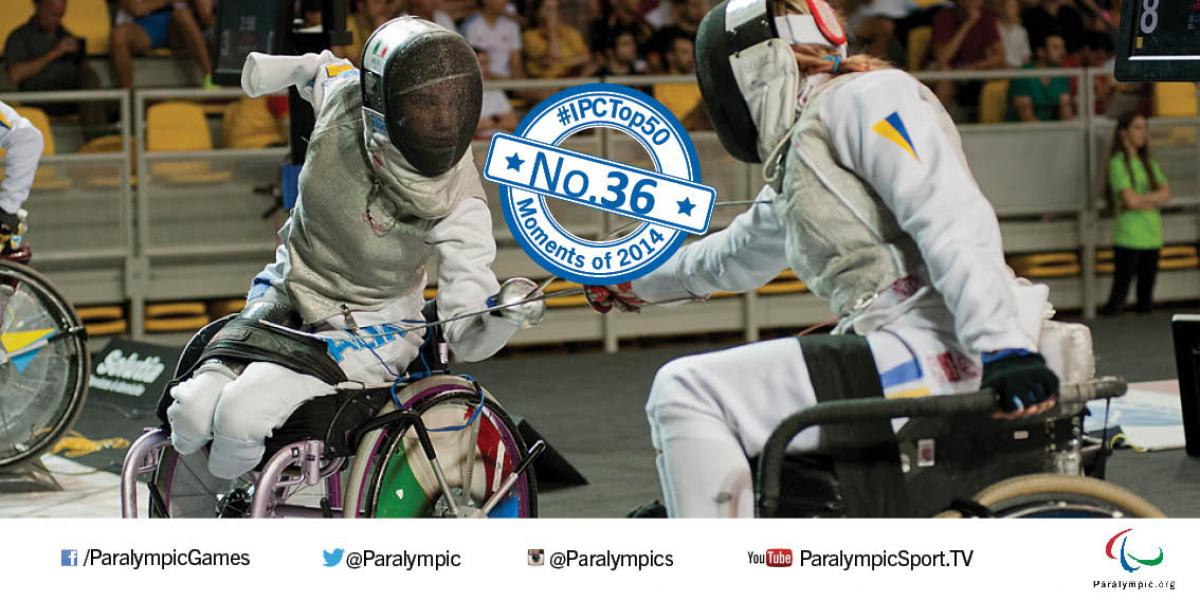 After exploding onto the international wheelchair fencing circuit in 2013, Italy’s Beatrice "Bebe" Vio took a temporary hiatus from the sport in 2014, but returned in dramatic fashion with two titles at the European Championships, making it one of the Top 50 Moments of the Year.

ⒸLuc Percival
By Michael Stuart | for the IPC

"I really love what I do, both school and sport, so I try to find the time to do everything the best I can."

After exploding onto the international wheelchair fencing circuit in 2013, Italy’s Beatrice "Bebe" Vio took a temporary hiatus from the sport in 2014, but returned in dramatic fashion with two titles at the European Championships, making it one of the Top 50 Moments of the Year.

In the early part of the 2014, the 17-year-old, who competes without arms and legs, was heavily focused on her studies in art and communication.

But despite stating that she "really loves" studying, Vio was also anxious to get back onto the piste and perform, and she did exactly that at the 2014 IWAS European Wheelchair Fencing Championships in Strasbourg, France.

"I went to Strasbourg eager to do well," explained Vio.

"I had to give up most of the season and I had a great desire to bounce back."

And bounce back she did. Vio looked comfortable as she eased her way through the early rounds of the category B foil competition. The first real challenge of her comeback came in the semi-final against Russia's Irina Mishurova, but Vio proved she had lost none of that fighting spirit in a 15-13 victory.

The Italian then showed composure beyond her years as she faced Russia’s Viktoria Boykova in the final, taking the title comfortably in a 15-5 win.

There was more to come from Vio too. She again proved that time away from competition had not reduced her competitive edge as she played a key role in an Italian victory in the women's team foil event.

According to Vio, the wins were made even more special by the fact that her Olympic idols were also competing at the same competition.

"Winning the titles was great, but the thing I actually liked most was being at the tournament along with the delegation of Olympic athletes," she explained.

"Competing side-by-side with some of my heroes like [Valentina] Vezzali, [Arriana] Errigo and [Elisa] Di Francisca was really motivating for me. The best was when they sang the Italian anthem for us after we won the team competition."

While Vio admits balancing elite sport with her studies has not been easy, it has not prevented her getting involved with additional projects.

"I really love what I do, both school and sport, so I try to find the time to do everything the best I can,” she said.

“I also collaborate with the non-profit association art4sport and am passionate about promoting Paralympic sport in Italy."

Despite all these endeavours, Vio remains firmly focused on qualifying for the next Paralympic Games.

"I'm very excited by the idea of going to Rio, even if I prefer to think year by year" she said.

"Now I have to finish 2014 well, and next year there will be many interesting competitions."

Vio's challengers would love to know how she managed to balance her studies with title winning performances, but the young star swears she doesn't know any other way.

"I don't have secrets," she claims. "I just love fencing and I do my best to get the results. This is my way of life."

Visit the IPC’s Top 50 Moments of 2014 campaign page for more information and join the Facebook Q&A with her at 3pm (CET).