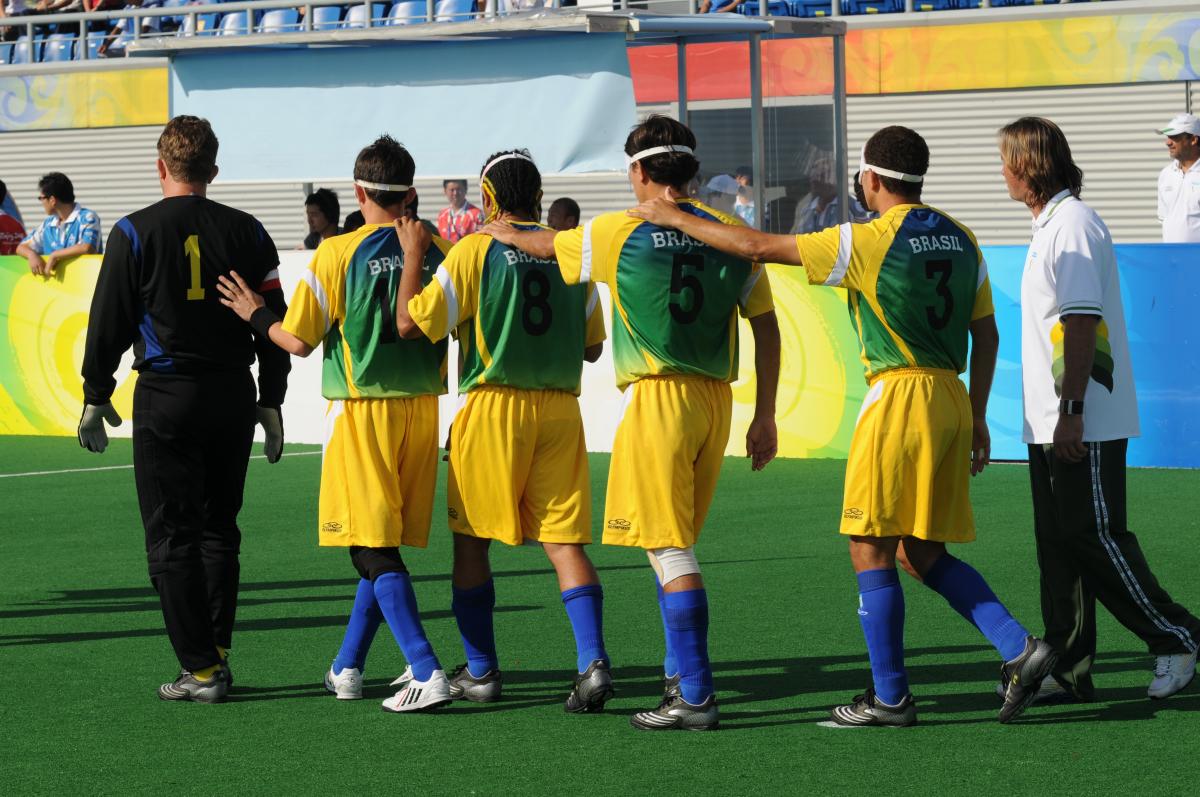 “In 2007, playing at home, it was a great joy. Now, we hope to win again and help Brazil to lead the medals table.”

Editor's Note: Prior to November’s Parapan American Games in Guadalajara, Mexico, the International Paralympic Committee (IPC) is counting down the top 10 storylines to watch. Today, Brazil’s Football 5-a-Side team comes in at No. 5.

Jefferson da Conceicao Goncalves has come a long way since playing football alone in the streets as a child outside his home in Candeias, Brazil.

Born with glaucoma and completely blind by age 7, he began playing football at 10 and had his first call-up to Brazil’s Football 5-a-Side national team in 2006 before being selected to play in the Parapan American Games in 2007 and the Paralympic Games in 2008.

Today, at 22, “Jefinho,” as he is known, is recognized by the Brazilian public in the streets as a national star.

He will definitely never be left to play football alone again.

In fact, he is now surrounded by some of the world’s best.

“Our recent achievements are helping the development of the (sport). Sometimes, I go out and people recognize me. The media coverage has also been increasing,” Jefinho said of Brazil’s Football 5-a-Side squad.

“Before, it was not like that. It started from 2004, and it’s been improving. We are showing people our talent.”

At the Parapan American Games in Guadalajara, Mexico, from 12-20 November, Jefinho and his teammates will be the favourites as the only squad to have ever won Paralympic gold in Football-5-a-Side.

“We are looking forward to winning the gold again,” Jefinho said. “In 2007, playing at home, it was a great joy. Now, we hope to win again and help Brazil to lead the medals table.”

Since the beginning of this year, the Brazilians have spent periods of time training in Rio de Janeiro, and they will arrive in Guadalajara early so they can get acclimatized prior to the competition.

While the team already qualified for the London 2012 Paralympic Games with a first-place finish at last year’s World Championships, it will still being going all out of gold against its main rival in Guadalajara.

And who may that be?

“Always Argentina,” Jefinho said, not hesitating in the least bit. “It has a great team, has great players and there is always a rivalry. They always play to beat us.

“But there are other strong teams,” he added. “They will be fighting for the Paralympic spot. We are already qualified, but we want the gold. The other teams want the gold and the spot in London, so they will be very motivated.”

Brazil would love to play the spoiler role more than anything.

And with Jefinho playing the right side and Ricardo “Ricardinho” Alves – the leader from the Beijing 2008 squad – playing the left, that possibility is highly probable.

The pair’s five years of chemistry on the field is unparalleled in Football-5-a-Side, but whether they shine without a Paralympic Games qualification spot on the line remains to be seen.