Australian cyclist Jayme Paris added another medal to her resume on Day 3 at the Velodrome. 02 Sep 2012
Imagen 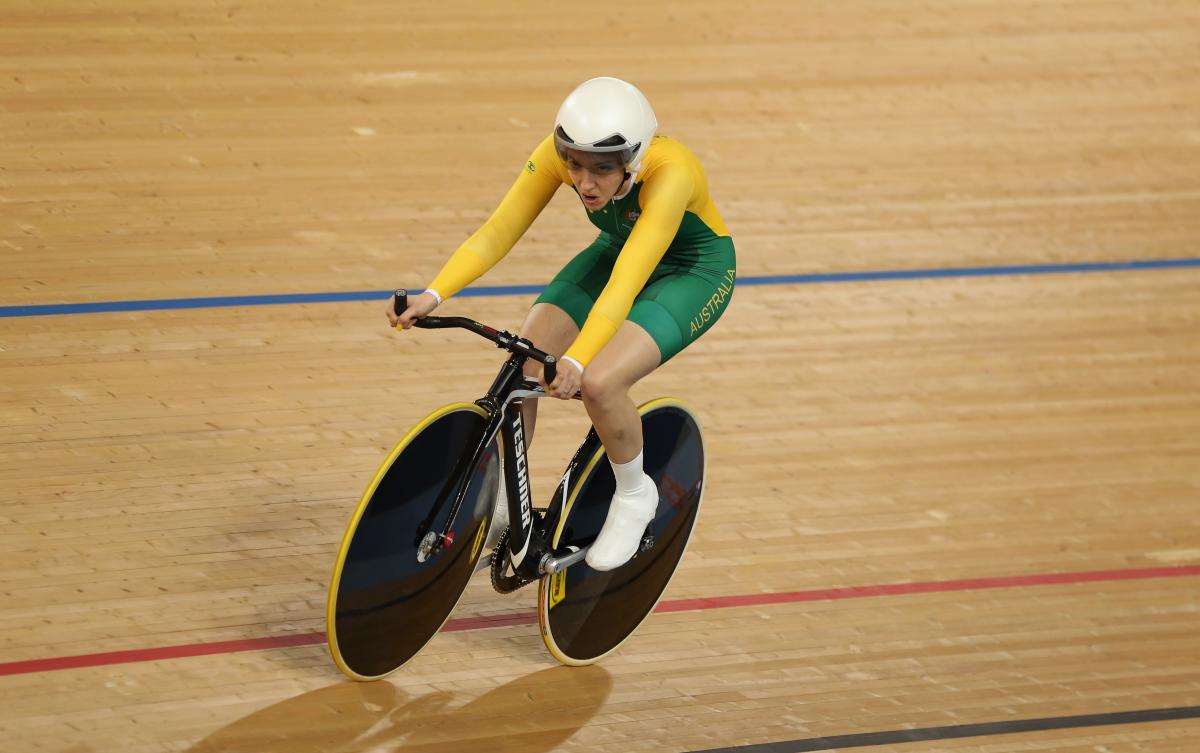 “I looked up and was disappointed (with the time), but then I got told it was a world record and thought I’d done the right thing by keeping the pressure on."

Australian cyclist Jayme Paris is in a class of her own – literally.

The 23-year-old broke the C1 world record with a superb ride in Saturday’s (1 September) women’s individual 500m time trial C1-3, with a factored time of 40.476s earning her a bronze medal at the Velodrome.

Paris was the only C1 competitor in the field of nine, and is also the only C1 in the entire women’s track competition.

But she insists the isolation helps her stay committed to the sport.

Paris said: “If I stop cycling, what if we get another C1? What's she going to be like? She’ll be in the same situation as me.

“I’ve got to keep going and hope one day someone pops their head in and says ‘I’m here, let’s compete’. Then we can give each other a run for our money.”

Former swimmer Paris turned to cycling after hearing Claire McLean being interviewed at the Athens 2004 Paralympic Games urging more women to take up the sport.

Four years ago she claimed bronze at Beijing in the 500m time trial (combined LC3, LC4, CP3), setting a new world record in the process.

On Saturday (September 1) she repeated the feat in London, despite a stutter on the first lap.

“After I had that big wobble I just put the pedal down and kept going. I came off at the end and someone said ‘that’s the world record’ and I couldn’t believe it.

“I was aiming for gold - I always aim high - but I’m ecstatic I’ve got another bronze to add and another world record.

“I thought I’d lost it, but for some reason I just kept the pressure on. Our coaches have taught us that if something goes wrong, you just keep going, and that’s what I did.

“I looked up and was disappointed (with the time), but then I got told it was a world record and thought I’d done the right thing by keeping the pressure on. I had the wait then to see the others come in, and it ended that I was in bronze.

“I could have been on the deck so easily, but I pulled it back. It wasn’t nerves, I was just pushing the bike a little bit too hard. The best thing I did was keep the pressure on. I’ve just got to do what I can to keep it rolling.”

After that early drama, few were expecting a new world record from Paris.

“I’m always going for my own world record,” she said. “But after the (shaking) attack I thought I’d lost it, so it’s a bonus with an attack involved.”

Paris still has the road race to come, but has already got her sights set on the 500m time-trial in Rio, where she hopes the experience of riding against C2 cyclists will help her progress.

“It makes me a better cyclist,” she said. “If I can tack on to a C2 wheel in the road race, then I’m only going to get stronger for doing that.

“When I come back to riding 500m at Rio, it’s only going to make me stronger and hopefully I might get gold or silver.”