British players will make up three of the four quad semi-final spots at the Nottingham Indoor Wheelchair Tennis Tournament after another day of home success.

Burdekin will now face fourth seed Dorrie Timmermans-Van Hall from the Netherlands for a place in the final while Parfitt will meet Adam Field, who made short work of his match against compatriot John Irving, 6-2, 6-0 at the City of Nottingham Tennis Centre.

With the Lord Mayor of Nottingham in attendance, local player and sixth seed David Phillipson reached the quarter-finals of the men’s singles defeating Albin Batycki, 6-3, 6-1.

British No. 3 Marc McCarroll was unable to build on a promising start against Belgian defending champion Joachim Gerard, with Gerard advancing, 6-7, 6-4, 6-2. Gerard will play Dutch top seed and world No. 2 Maikel Scheffers in a rematch of their 2010 semi-final. 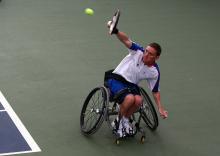 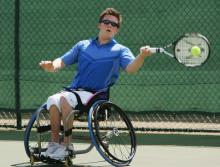