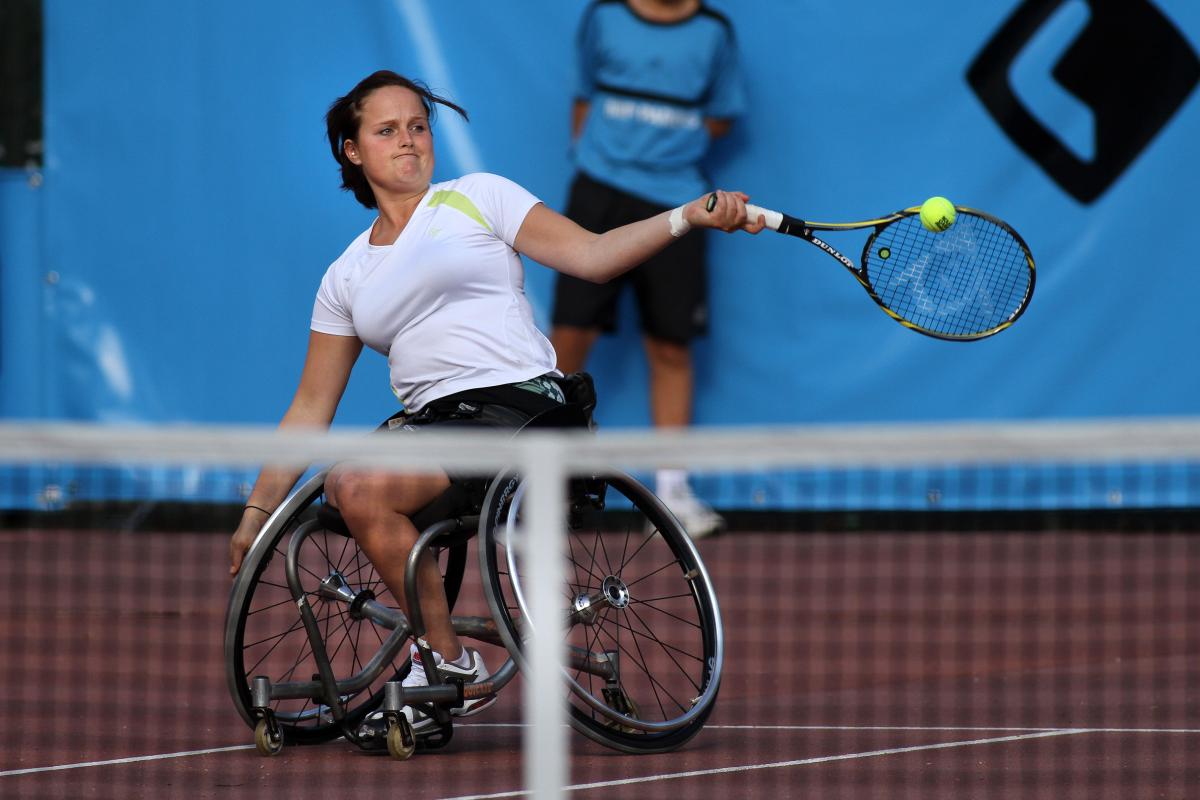 “We were solid today and for me it shows what you can achieve when you play like brothers.”

Two new sets of champions were crowned on the last day of the Wimbledon Wheelchair Doubles event on Sunday (8 July) as Tom Egberink of the Netherlands and Michael Jeremiasz of France won the men’s title and the all-Dutch pairing of Jiske Griffioen and Aniek van Koot, the 2011 runners-up, claimed the women’s title.

Egberink and Jeremiasz, who arrived in London with T-shirts announcing themselves in fluorescent pink writing as “The Boom Boom Boys,” lived up to their light-hearted nickname, defeating top seeds and two-time Wimbledon champions Robin Ammerlaan and Ronald Vink of the Netherlands in the finals, 6-4, 6-2.

That took their unbeaten winning streak as a partnership to 10 matches across three tournaments.

Victory brought them their first Grand Slam title and ended Ammerlaan and Vink’s bid for a third Wimbledon title.

“We were solid today and for me it shows what you can achieve when you play like brothers,” Jeremiasz said. “I look at Tom as a 19-year-old and I feel like his big brother and when I can tell him what to do and he does it, then that makes us a successful partnership as we both know what the other is doing. We were not slow to start today, we made sure we imposed ourselves on them and didn’t let them impose themselves on us. The Boom Boom Boys are still unbeaten.”

With Griffioen having twice been a semi-finalist at Wimbledon in 2009 and 2010 and van Koot also unable to ever get beyond the 2010 semi-finals before, the two paired up to reach the 2011 final, and dominated British duo Lucy Shuker and Jordanne Whiley, 6-1, 6-2, for the win.

“It’s an incredible feeling to win our first Grand Slam together and to win my second Slam after I won Roland Garros in 2010 with Dani di Toro,” said van Koot. “It’s very special to do it at Wimbledon after being so close last year and I had a great doubles partner when I got stressed,”

In the third and fourth play-offs, second seeds and US Open champions Stephane Houdet and Nicolas Peifer of France beat British duo Marc McCarroll and Gordon Reid, 6-1, 7-6, while in the women's event top seeds and Roland Garros champions

The next major Wheelchair Tennis tournament will be the London 2012 Paralympic Games, where 112 athletes will compete from 1-8 September at Eton Manor in both singles and doubles.