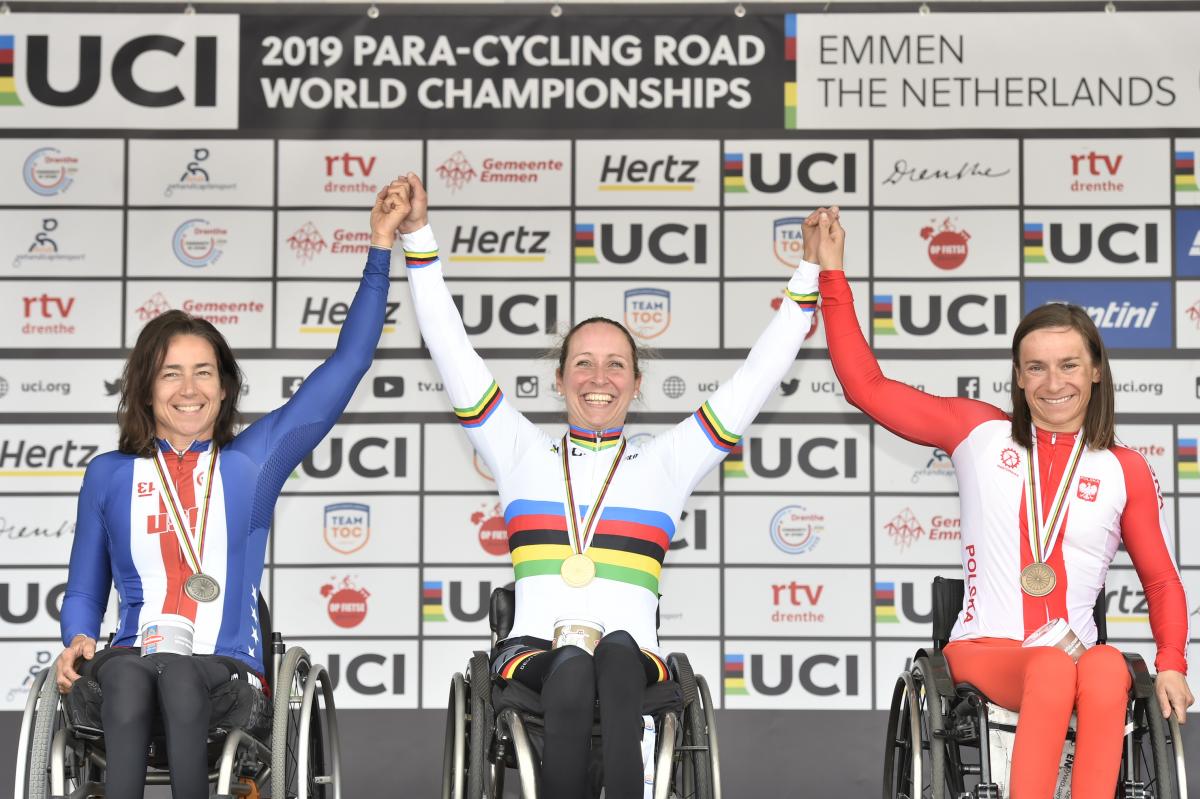 For athletes such as home favourite Jetze Plat, the 2019 Para Cycling Road World Championships in Emmen, Netherlands, was an extension of his domination. But for some such as Germany’s Annika Zeyen, putting on the rainbow jersey was a new feeling.

The five-day competition concluded on Sunday, with a mix of story lines highlighting Emmen 2019.

The confidence of 28-year-old Plat would have skyrocket after winning the men’s road race H4, his third world title in less than two weeks. On Friday (13 September), Plat stormed to seal victory in time-trials, just one week after winning his fourth consecutive Para triathlon world title in Lausanne, Switzerland.

His achievement was a progression since his road race bronze from the Rio 2016 Paralympics. Plat went on to win the world time trial and road race titles in both 2017 and 2018. Earlier this year, Plat crushed the handbike hour record, covering a distance of 44.749km that beat the existing record by over 2km.

More athletes continued their excellence in the sport.

Australia’s Carol Cooke landed her ninth world title after winning the women’s time trial and road races in the T2 category. Her attention now turns to Tokyo 2020 where she will look to win her fourth – and possibly fifth – Paralympic gold medal.

She retains her WC5 TT World Championship title in style!

We're just a few hours in to the @UCI_paracycling Road World Championships and we have our first British champion 🇬🇧#emmen2019 pic.twitter.com/gClAsuIW96

After sixth-place finish in the women’s time trial H3, Zeyen challenged expectations and surprised the field and herself with gold in the road race by two seconds. It was her first gold medal and world title in the sport since taking it up this year.

The victory added to her team relay bronze.

It was a neck-to-neck battle between Eskau and long-time US rival Oksana Masters – both PyeongChang 2018 Paralympic Winter Games champions. Masters attacked the climb in the road race, but it was Eskau who counter attacked and overtook Masters in the final sprint.

Their success helped the Germans finish second in the overall medals table with 19 medals (eight golds). Australia led the way with nine golds.

Jianxin Chen spoiled a ninth gold for Germany when he beat out Maximilian Jaeger in the men’s time trial T2.

But China’s strength seemed more noticeable in the road races, in which they won three golds.

Guoping Wei was victorious in the C4 category.

His teammate Xiaomei Wang added to the tally in the women’s C3. Wang repeated the form that won her the Para Cycling Track World Championship gold in the women’s scratch C3 earlier in the year in Apeldoorn, Netherlands, claiming the title ahead of Japan’s Keiko Sugiura.

Confidence flooded through the team, sending Wangwei Qian to women’s gold in the women’s C1.

The nation opened the Championships with gold in the team relay.

Congratulations to Italy 🇮🇹 who became the first UCI Para-cycling Road World Champions of #Emmen2019 in the Team Relay yesterday! 🌈

Sporting legend Alex Zanardi was no stranger on the podium, winning his 12th world title. The 52-year-old carried his form from that team victory and went on to clinch the men’s time trial H5.

Complete reviews and results from the Emmen 2019 Para Cycling Road World Championships are available on the UCI’s website.

Cycling
Alex Zanardi storms back to the top