Despite her youth, Colombia’s two-time Paralympian has the necessary experience to shine at the Tokyo 2020 Paralympic Games. 18 Mar 2017
Imagen 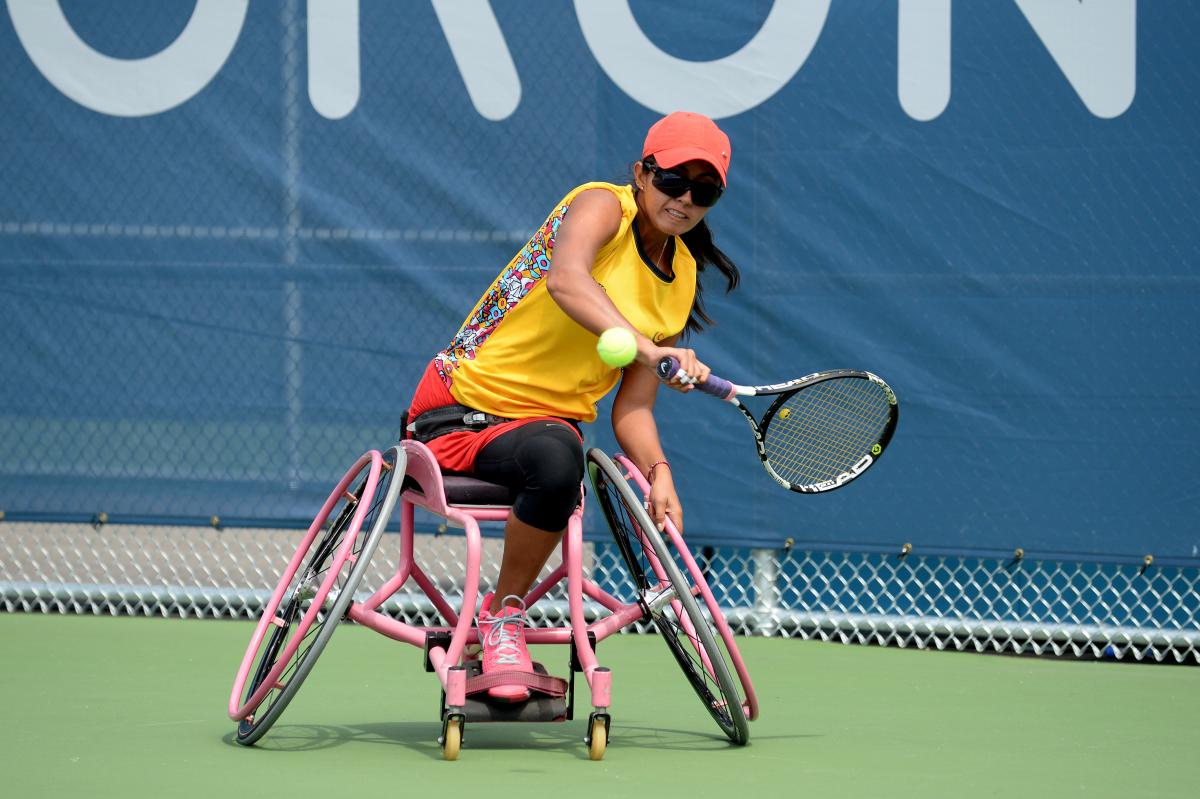 Angelica Bernal, Colombia, in the women's doubles semi-final against USA at the Toronto 2015 Parapan American Games.

ⒸJon Blacker for the IPC

"I am already thinking about getting to Tokyo 2020 as strong as possible both physically and mentally."

Angelica Bernal might be just 20-years-old, but plays wheelchair tennis like a veteran. Colombia’s world No.27 is already a two-time Paralympian and has the experience few players of her age have.

Bernal, who last competed at the Colombian Open in December 2016, winning the title without conceding a game, is already targeting further success.

“I am already thinking about getting to Tokyo 2020 as strong as possible both physically and mentally,” she said. “I see myself winning a Paralympic medal, I know I can achieve that.

“I have been playing against the top-10 players for the last two years and losing in tight matches. And I will have a better level in four-years-time.”

Her first Paralympic experience was at London 2012, losing in the first round of the women’s singles, but reaching the quarter-finals in the doubles in partnership with Johana Martinez Vega thus claiming her first Paralympic diploma.

“As London 2012 was my first Games, I wanted to know what a Paralympics was about and see their magnitude. I did not go with high expectations, but still won the diploma in the doubles,” she recalled.

Bernal went to Rio to compete at Latin America´s first Paralympics with much more confidence, but had to play against the Netherlands’ world No.4 Marjolein Buis in the first round.

“I had high expectations for Rio 2016 and had trained very hard, but things did not go as planned. I was not lucky with the draw,” she said.

“However, I know that if I continue through this path I will achieve great things.”

Bernal took up wheelchair tennis in 2007 after having tried many other sports. She feels inspired by Dutch legendand multiple-Paralympic champion Esther Vergeer.

“She is someone I look up to,” said Bernal. “Before retiring, she used to make wheelchair tennis look easy and was the best for a long time. She is my role model and I want to become a great player like she was.”

Apart from sealing a medal at a Paralympic Games, the Colombian is hoping to reach the world No.1 position and compete at Wimbledon one day.

“Wimbledon is my favourite Grand Slam because it is tennis’ birthplace and is played on grass, surface I have never played on,” she said.

“But since I started with this sport, I have always dreamed of becoming the world No.1. Every athlete from every sport works hard to be the best. But you need to work hard to achieve that.”