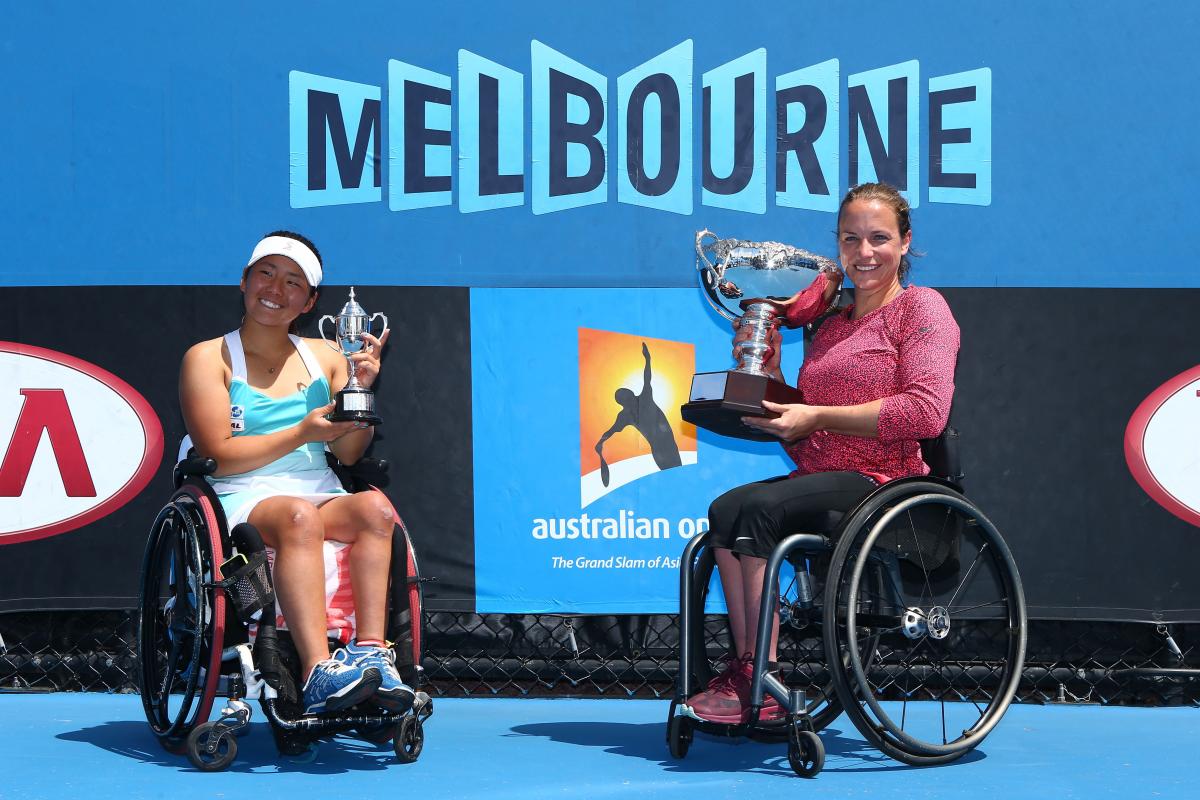 The Netherlands' Jiske Griffioen poses her with her trophy after winning her women's wheelchair singles final against Japan's Yui Kamiji at the Australian Open 2015 Wheelchair Championships.

Griffioen has won 11 Grand Slam doubles titles but had struggled to transfer that success onto the singles court, until Saturday when she beat Kamiji 6-3 7-5 in the final at Melbourne Park.

Griffioen said: "I'm really happy. There was some pressure on this one. I've been close so many times but for some reason was never really able to perform at the Grand Slams [in singles].

"This first one was a big hurdle for me. I have this one, they can't take it away from me any more so now I can look further towards Roland Garros and the US Open."

Griffioen was competing in only her second Grand Slam singles final after finishing runner-up at Roland Garros in 2013, although she did reach the final of the 2006 Wheelchair Classic 8s in Melbourne, which was the forerunner to the current Grand Slam event.

The Dutchwoman faced a tough task against Kamiji, who was bidding to hold all the Grand Slam titles in singles and doubles. However, Griffioen made a strong start and looked on course for victory at a set and a break up.

Kamiji pulled it back, though, and had a set point to level the match but could not take it and Griffioen went on to seal the victory.

Both players had less than 17 hours to recover after their long encounter on Friday night with the women's wheelchair doubles final, in which Kamiji and Great Britain’s Jordanne Whiley beat Griffioen and compatriot Aniek Van Koot, in a match lasting three hours and 21 minutes.

Griffioen said: "That was a battle. We had a match point and lost so obviously you feel the three and a half hours a little more.

"I had a good night's sleep and this morning I felt my back a little bit but I was like 'OK, I'm a little tired but it's not too bad so just go again'."

Kunieda took the opening set in just 29 minutes but was pushed hard by 44-year-old Houdet in a lengthy first game of the second set. Kunieda, 30, edged it and then went on to clinch his eighth Australian Open title.

In the quad wheelchair singles final, Australian Dylan Alcott gave his large fan club much to cheer about as he claimed his first Grand Slam title in his home city with a 6-2 6-3 win against the USA’s David Wagner.

Alcott claimed an immediate break and eased to the first set against the defending champion. Rain halted play briefly at the start of the second set before Alcott came back out and proved too strong for Wagner.

The 24-year-old said: 'I've got a lot of friends and they all came out to support. To have 500 of my friends there and to win was incredible. I was a bit nervous when I was walking out and then I saw them, it actually calmed me which was good.

"To do that at the Australian Open on my home court, that's the definition of a dream come true.

Moments after, Alcott received a tweet of congratulations from Aussie teenager Nick Kyrgios. Alcott said: "We trained together [in the gym] every day when he was here in Melbourne. He's always been a big supporter of me and wheelchair tennis.

"We had a hit together last year. Good on him for involving us and treating us like equals in the gym. He's a top bloke."