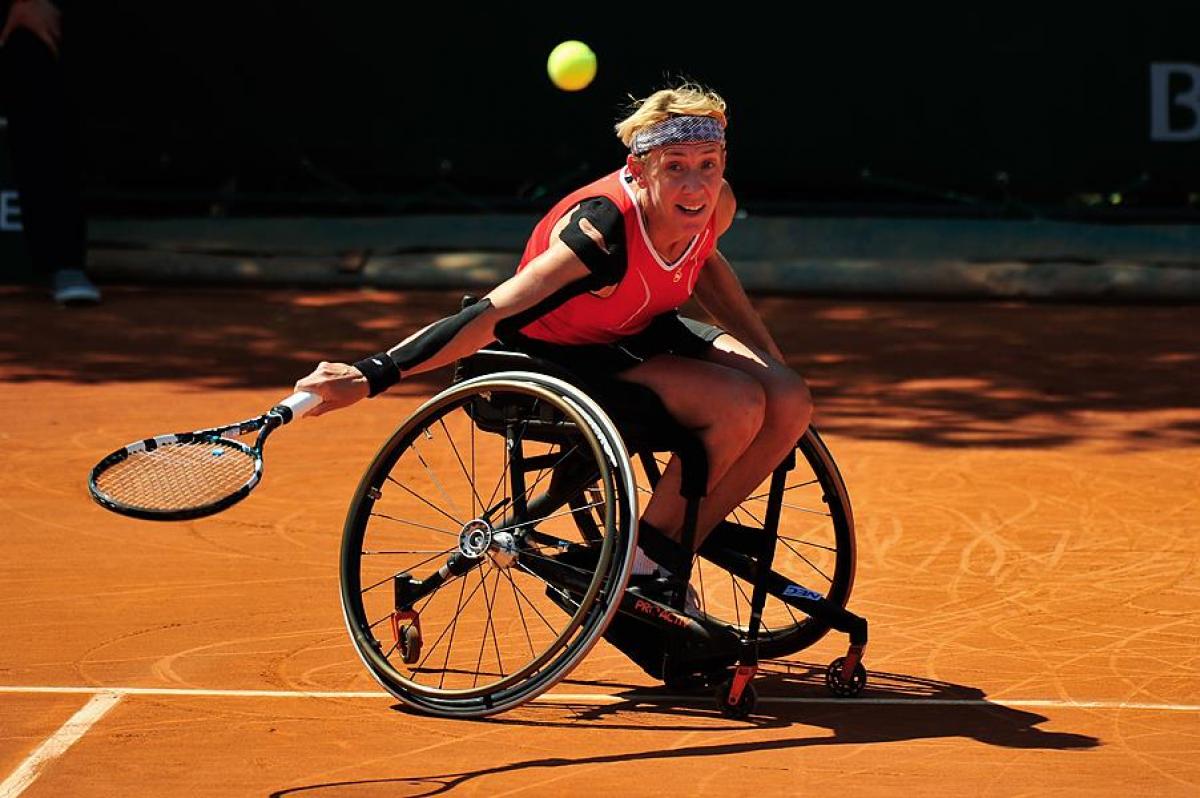 After finishing runner-up to world No. 1 van Koot in her first Grand Slam final at the Australian Open, world No. 3 Ellerbrock ended Roland Garros having beaten both of the world’s top two players.

After beating world No. 1 Shingo Kunieda of Japan in a final -set tiebreak in the men’s singles final, Houdet then partnered with Kunieda to win their second men’s doubles title together at Roland Garros, while Dutch duo Jiske Griffioen and Aniek van Koot also justified their top seeding to add the Roland Garros crown to the Wimbledon and Australian Open titles they have also won in the last twelve months.

For the second year in a row in Paris world No. 2 Houdet and Kunieda went to a final set tiebreak in the men’s singles final, Houdet finally clinching a 7-5, 5-7, 7-6(5) victory.

Houdet came from 2-0 down to lead the first set for the first time at 4-3 and saved a set point at 5-4 down. However, the Frenchman held his nerve and won a series of close exchanges to take the last three games of the set.

Kunieda again broke at the start of the second set and kept his advantage until Houdet broke back for 5-5. But this time it was Kunieda who found a way to win the big points to take the last two games after twice serving for the set.

The final set saw both players exchange games all the way through, Houdet breaking the four-time champion’s serve to love as Kunieda attempted to serve for the match.

Defending champion Houdet edged ahead at 6-5 before Kunieda forced the tiebreak to bring back memories of 2012, when Kunieda missed two match points in the final set tiebreak.

However, there were to be no match points for Kunieda this year as Houdet took the first three points of the tiebreak. Although Kunieda got within a point at 5-4 and saved a match point at 6-5, Houdet eventually wrapped up his second Grand Slam title on home clay.

“I have a special phrase for the definition of happiness – to share small moments of pleasure with everyone. And today everyone was there - sponsors, family, the ITF, FFT - everyone was there,” said a delighted Houdet.

“The level of the match was nice. The minister of sports was there, which was great. The involvement of the federation is probably one of the best, they came to watch and I think they really want to do something good.”

After finishing runner-up to world No. 1 van Koot in her first Grand Slam final at the Australian Open, world No. 3 Ellerbrock ended Roland Garros having beaten both of the world’s top two players.

Ellerbrock gained the first service break of the final to move 4-2 ahead and broke Griffioen to love to take the opening set. A comfortable service hold for Griffioen put her in command of the second set at 5-3 and she went on to break Ellerbrock on the first of two set points.

From 40-0 down in the fourth game of the final set Griffioen battled back to deuce, but Ellerbrock held on to gain the first service hold of the decider, taking a 3-1 lead. From that point on Ellerbrock remained in control and closed out a historic win on the first of three match points to become the first player to add her name to the women’s roll of honour at Roland Garros since the retirement of Esther Verger, the undefeated six-time champion in Paris.

“It’s really unbelievable at the minute, especially after London 2012, where it was close,” said Ellerbrock. “I hoped to get the title after a 5-7 loss in the third in the Australian Open final, but I would like to dedicate this win to (fellow player Claudia Fornefeld) who passed away in February. This was the last tournament we visited together, so it’s very emotional.”

Both sets of singles finalists were back on court later in the day for the men’s and women’s doubles final.

After going head-to-head in the men’s singles final, top seeds Houdet and Kunieda fought back from a set down in the men’s doubles final to beat second seeds Gordon Reid of Great Britain and Dutchman Ronald Vink in a championship tiebreak, winning 3-6, 6-4 (10-6).

The reigning Doubles Masters champions also won the women’s doubles title, Griffioen and van Koot building on an early break in the first set and coming from 3-2 down in the second to beat Ellerbrock and Dutchwoman Sharon Walraven, 6-2, 6-3.

“I think we played offensive tennis and kept the pressure on them,” said van Koot. “Even though the second set was closer, we kept fighting together.

Stephane Houdet at the 2013 French Open. In 2014, he made history, winning his third consecutive title at the UNIQLO Wheelchair Doubles Masters in Mission Veijo, California, USA, along with Belgium’s Joachim Gerard