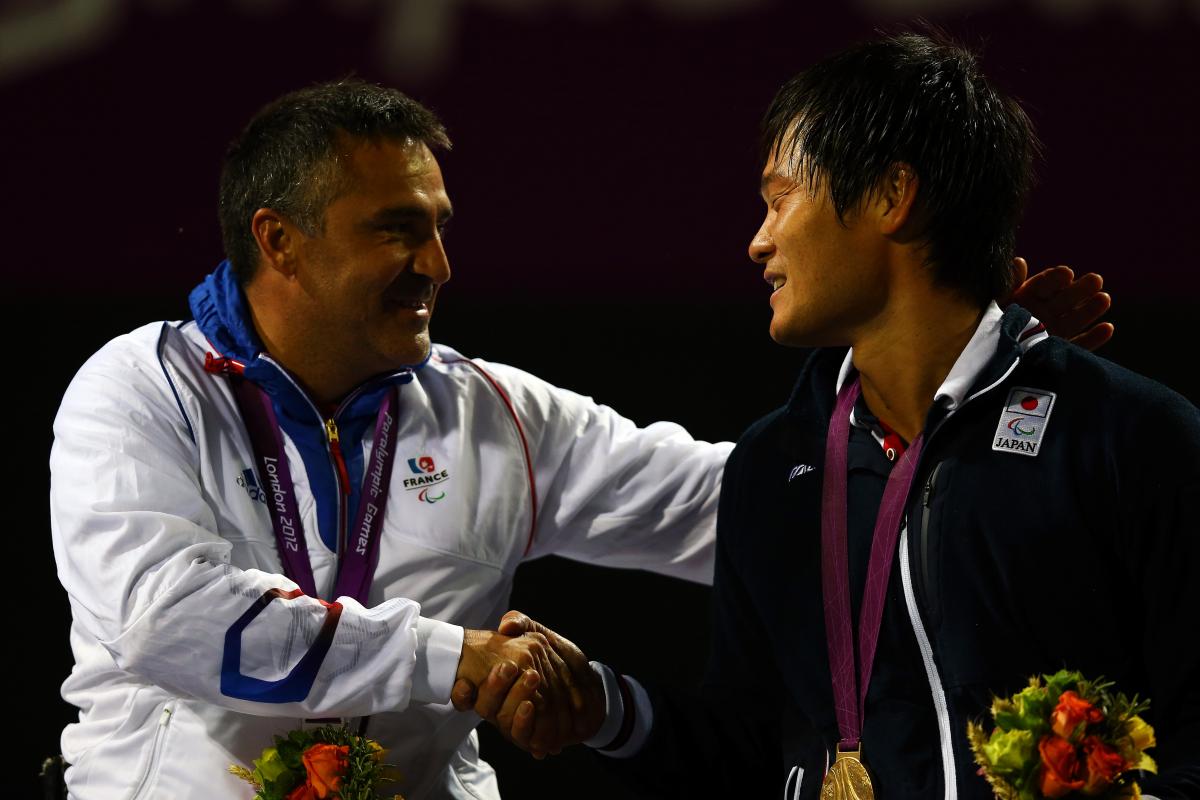 France’s Stephane Houdet and Japan’s Shingo Kunieda won their first Invacare Doubles Masters men’s title as a partnership on Sunday (18 November) in Amsterdam after storming back from dropping a dramatic opening set to beat second seeds Gordon Reid of Great Britain and Ronald Vink of the Netherlands in three sets, 6-7(6), 6-2, 6-1.

Dutch top seeds Jiske Griffioen and Aniek van Koot sealed the women’s doubles title also for the first time as a partnership after they defeated third seeds Sabine Ellerbrock of Germany and Yui Kamiji of Japan in straight sets, 6-0, 6-3.

American top seeds Nick Taylor and David Wagner won the quad doubles title for the sixth time since 2005 during Saturday's penultimate day of play at the Frans Otten Stadium.

The first set in the men’s doubles final swung one way and then the other, with neither team leading by more than one game. However, at 6-5 up Reid and Vink had three set points on Kunieda’s serve, only to make a series of unforced errors as Houdet and Kunieda saved all three to force the tiebreak.

Houdet and Kunieda then got the better of the exchanges at the start of the tiebreak and had four set points at 6-2, but Reid and Vink showed tremendous spirit as they reeled off the last six points of the first set, with Vink saving the fourth match point they faced when he slotted a forehand winner down the centre of the court between Houdet and Kunieda.

After the drama of the first set Reid and Vink managed to win just the sixth game of the second set, despite some close exchanges as Houdet and Kunieda forced a decider.

They maintained their momentum to build another 5-1 lead before Kunieda finally served out for the victory on his and Houdet’s first match point after two hours and 25 minutes.

Victory in the women’s doubles brought the curtain down on a highly successful 2012 for Griffioen and van Koot.

The Wimbledon and British Open champions, who went on to win the silver medal in the women’s doubles at the London 2012 Paralympics, ensured that they went on better at the Invacare Doubles Masters than in 2011, when they were runners-up.

Griffioen and Van Koot dominated their match against Invacare Doubles Masters debutantes Ellerbrock and Kamiji and end 2012 having won six tournaments together.

After losing the first set of their round-robin pool match to second seeds Antonio Raffaele of Italy and Shraga Weinberg of Israel on Thursday, Taylor and Wagner made a much better start against the same opponents in the final.

After both partnerships had exchanged service breaks in the first three games of the first set, Taylor and Wagner established a 4-1 lead and while Raffaele and Weinberg have chances to reduce their arrears to 4-2, the American defending champions stretched their lead to 5-1.

Taylor and Wagner created two set points in the seventh game, Weinberg saving the first with a forehand winner down the line, but Taylor then delivered a high looping forehand towards Raffaele and the ball bounced out of reach of the Italian, for whom it was also the second Invacare Doubles Masters final in successive years.