World No.1 claimed women's title whilst world No.4 took victory in the quads in Nottingham. 20 Jul 2014
Imagen 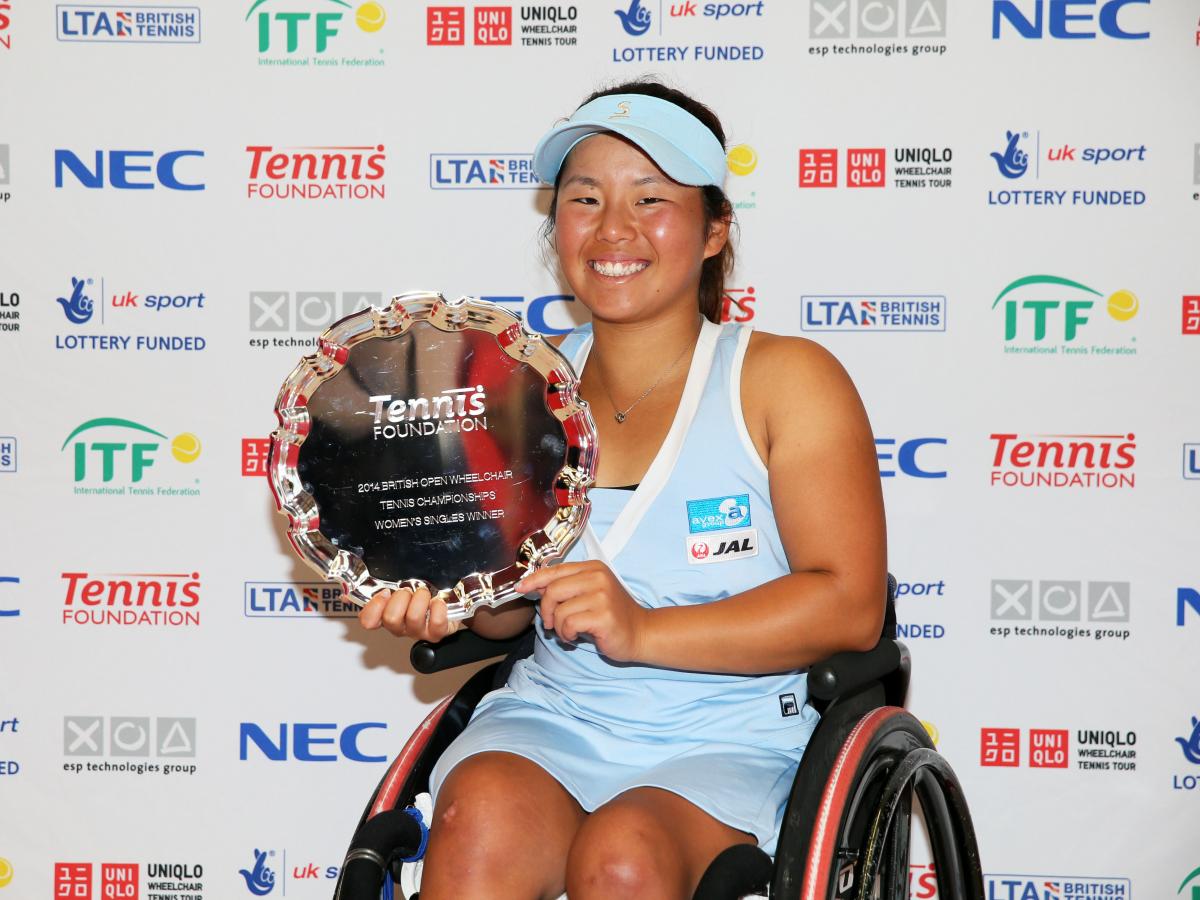 "The first set went really well for me, but in the second set there were more high balls and slower balls, which I don't like, but the third set was faster and I was able to use more power."

World No.1 Kamiji claimed her first British Open title after beating Aniek van Koot of the Netherlands 6-3, 2-6, 6-4, with the Dutch world No. 2 finishing runner-up in Nottingham for the second successive year.

"This is my second time in Nottingham and I'm really very happy to win this title after being beaten in the second round in 2012," said Kamiji. "The first set went really well for me, but in the second set there were more high balls and slower balls, which I don't like, but the third set was faster and I was able to use more power."

As heavy rain forced the day's competition indoors, world No. 4 Alcott sealed his first Super Series title as he denied Britain's world No. 3 Andy Lapthorne a victory on home soil after winning the quad singles final 7-5, 6-1.

"He played unbelievably well early on, but once I started getting my serve in I felt a lot more comfortable and I'm absolutely stoked to win my first Super Series," said Alcott, who came back from 5-3 down in the opening set to clinch victory.

Lapthorne said: "After the highs of beating the world No.1 David Wagner yesterday [Friday 18 July] I really wanted to win my home Super Series title today, but Dylan played well and I was just beaten by the better player on the day,"

In the men's singles, World No. 3 Reid produced a tremendous performance as he secured his fourth career win over French world No. 2 Stephane Houdet with a 6-1, 6-3 victory to reach his second British Open final. Reid will now play world No. 1 Kunieda in Sunday's final in a rematch of the 2012 decider in Nottingham.

"I'm very happy with my performance level today to beat Stephane for the first time this season and so convincingly," said 22-year-old Reid, who won his first Super Series title in Sydney in January this year, beating Kunieda in the semi-finals.

"I'm a different player to the one I was two years ago. I've beaten him (Kunieda) three times since 2012 and I know I can beat him. If I play the way I did today then there is no reason I can't take home the trophy."

The men's doubles title was won by top seeds Joachim Gerard of Belgium and Maikel Scheffers of the Netherlands, who recovered from a set down to defeat fourth seeds Fernandez and Nicolas Peifer of France 2-6, 6-3, 6-1.

There will be another Brit in a final on Sunday after Jamie Burdekin partnered Wagner to win their quad doubles semi-final against American duo David Buck and Greg Hasterok 6-0, 6-1. The second seeds will play Alcott and South Africa's Lucas Sithole in Sunday's final after fourth seeds' 6-3, 7-5 win over British top seeds Antony Cotterill and Lapthorne.

Organised by the Tennis Foundation, the British Open is a crucial tournament for the world's leading men's, women's and quad players aiming to gain enough ranking points to qualify for the NEC Wheelchair Tennis Masters, the year-end singles championship, which takes places at Lee Valley Hockey and Tennis Centre in the Queen Elizabeth Olympic Park, London, Great Britain on 26 - 30 November.