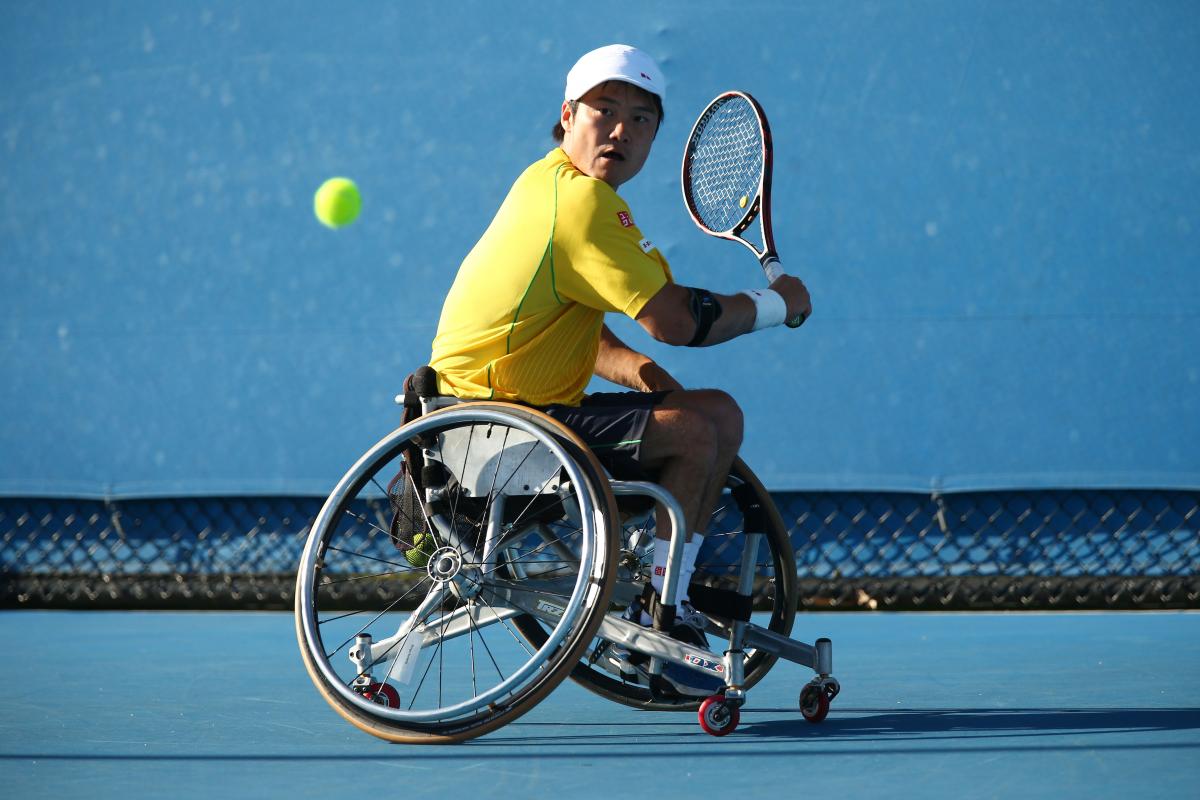 Japan's Shingo Kunieda is currently the world No. 1 in wheelchair tennis

World No. 3 Reid, who has already beaten Kunieda this season, then had an opportunity to force a first set tiebreak, but he was unable to take his chance and Kunieda went on to wrap up 7-5, 6-2 win to move on to the semi-finals.

Unbeaten in all six Australian Opens he has played since 2007, defending champion Shingo Kunieda lost the first two games of his opening men’s singles match against Great Britain’s Gordon Reid on Wednesday (22 January), and the Japanese world No. 1 also had to fend off a set point at 5-3 down.

World No. 3 Reid, who has already beaten Kunieda this season, then had an opportunity to force a first set tiebreak, but he was unable to take his chance and Kunieda went on to wrap up 7-5, 6-2 win to move on to the semi-finals.

Kunieda will face Dutchman Maikel Scheffers, who won the title in 2012 in Kunieda’s absence, after Scheffers managed to hold off a considerable challenge from Australian wildcard Adam Kellerman. Kellerman, playing in his second main draw in Melbourne after winning Monday’s wildcard playoff, led Scheffers 5-4 in the second set before Scheffers prevailed, 7-5, 7-5.

Argentina’s Gustavo Fernandez became the first South American player to reach a wheelchair Grand Slam singles semi-final after a fine performance against world No. 7 Michael Jeremiasz of France. Fernandez beat Jeremiasz 6-4, 6-1 and faces another French opponent in Thursday’s semi-finals after world No. 2 Houdet fought back from a set down against Belgium’s Joachim Gerard.

World No. 4 Gerard, playing in his first Australian Open after making his Grand Slam debut at the US Open in September, led Houdet 3-1 and 5-3 before finally taking the opening set, but Houdet clinched the last four games of the match for a 4-6, 6-2, 6-2 victory.

Whiley fought back from 2-0 down in the opening set of her first match at the Australian Open since 2011 to beat Dutch world No. 9 and wildcard entry Sharon Walraven, 6-3, 6-3.

After retiring from her Melbourne Open semi-final over the weekend due to injury, world No. 2 Ellerbrock showed few ill effects as she began her third Australian Open by reeling off four games in succession against South Africa’s world No. 6 Kgothatso Montjane. Ellerbrock built on her early success to wrap up a comfortable 6-1, 6-3 victory.

The other women’s semi-final will feature world No. 3 Yui Kamiji of Japan and world No. 4 Jiske Griffioen of Netherlands. With two Dutch players in the bottom half of the women’s draw, Griffioen eased past Britain’s 2013 semi-finalist Lucy Shuker 6-1, 6-2, while second seed Kamiji repelled a second set comeback from world No. 3 Marjolein Buis to prevent an all-Dutch semifinal as she sealed a 6-1, 6-4 win.

Defending quad singles champion David Wagner of the USA faced a match point against him in the first of his three round-robin contests at Melbourne Park.

World No. 1 Wagner, who is making his seasonal debut this week, took a 4-1 first set lead against Australian wildcard Dylan Alcott in the first-ever match between the two players.

However, Alcott, who has played the first three quad singles events of his career this month to make his debut on the world rankings at No. 21 this week, hit back to snatch the opening set. Alcott then had a match point in the second set before Wagner eventually sealed a 4-6, 7-6(5), 6-3 victory.

Andy Lapthorne, runner-up to Wagner in 2013 also lost his opening match as US Open champion and world No. 2 Lucas Sithole got his Australian Open debut off to a fine start.

Sithole recovered from 3-0 down to take the opening set against world No. 3 Lapthorne and went on to complete a 6-4, 6-2 win ahead of playing Wagner in his second match on Thursday.

The top two players at the end of the round-robin matches will advance to Saturday’s final.