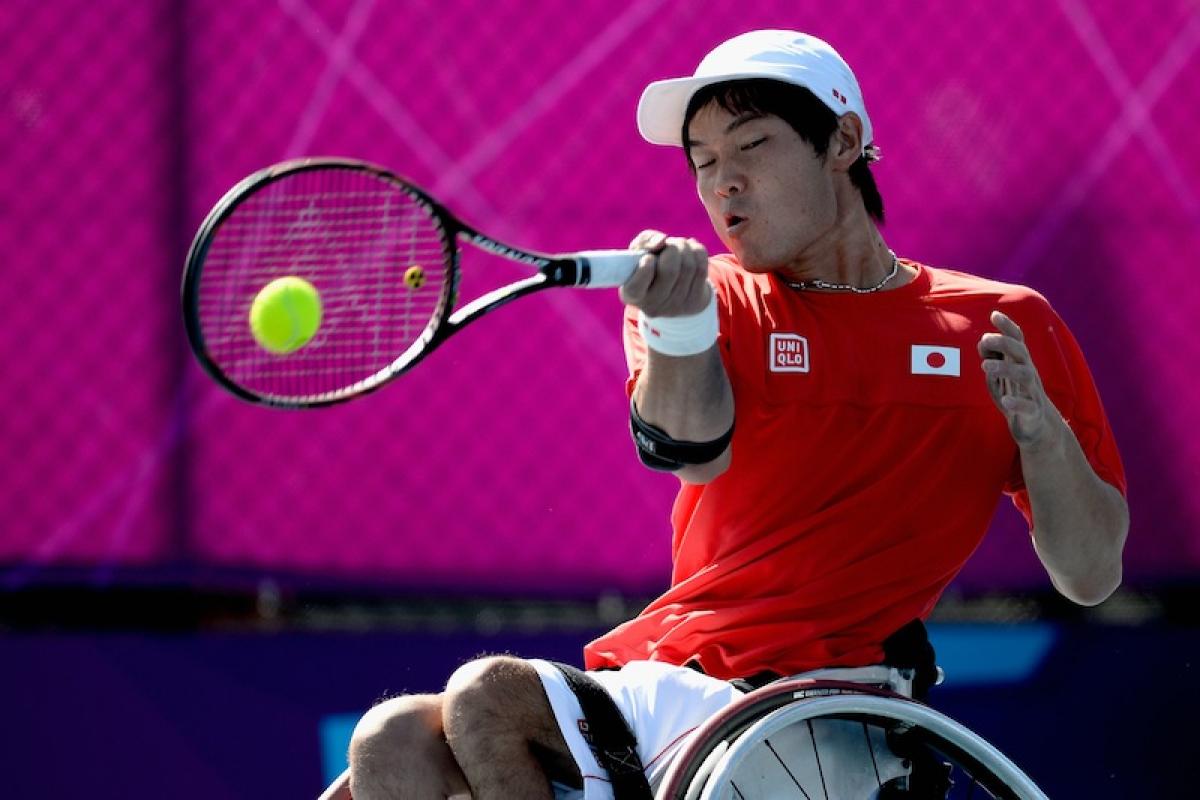 Shingo Kunieda of Japan at London 2012.

On another scorching hot day at Eton Manor, three gold medals were claimed, with the pick of the games being the men’s singles gold medal showdown between the world’s ranked No.1 and No. 2.

World champion Stephane Houdet of France locked horns with Beijing 2008 gold medallist Shingo Kunieda of Japan, in what was a gripping encounter as neither player was giving up an inch.

Houdet’s overall power created a tough challenge for Kunieda, but his technique and speed constantly troubled the Frenchmen and proved too much in the end resulting in Kunieda retaining his Paralympic crown in straight sets, 6-4 6-2.

"I'm tired, but I've done well," Kunieda said. "It's quite unbelievable. January and February was a hard time for me. I worked hard so I could come and win. It was my dream to come here and it's become a reality.

The contest was much tighter than the score line suggests, as the action went back and forth at a blistering speed involving some magnificent rallies that captivated the crowd.

In the women’s doubles final, the Netherlands’ Esther Vergeer completed a clean sweep of gold medals at Eton Manor, as her and Marjolein Buis toppled fellow Dutch compatriots Aniek van Koot and Jiske Griffioen to take prime place on the podium.

Vergeer and Buis’s impressive teamwork was too much for their opponents as they dominated the first set 6-1, but then they were pushed hard at the beginning of the second going down 0-2, however, they eventually won it in resounding fashion, winning the set 6-3.

Van Koot and Griffioen gave a good account of themselves but the presence of Vergeer was too powerful and Buis was also on form as she produced some killer shots.

Vergeer looked determined as ever to reclaim doubles gold as she had to settle with silver at Beijing 2008 and in the end was ecstatic to be on the podium once again at London 2012.

“We played amazing,” she said. “As we got closer to the victory we thought 'is this really going to happen' and we looked at each other and we could not believe it."

With Buis picking up a gold medal, this means that all four women from the Netherlands have picked up a medal at the 2012 Paralympic Games.

It was another all-Dutch affair in the men’s singles bronze-medal decider, as Ronald Vink and Maikel Scheffers battled it out, with Vink clinching his first Paralympic medal, by beating his resilient countryman 4-6, 7-6, 6-4.

Vink was delighted to pick up the bronze after having to make sacrifices along the way to get there.

“After finishing fourth twice in Bejiing, I decided in 2009 to stop my job and focus on only the tennis, year by year, it paid off and I feel great.”