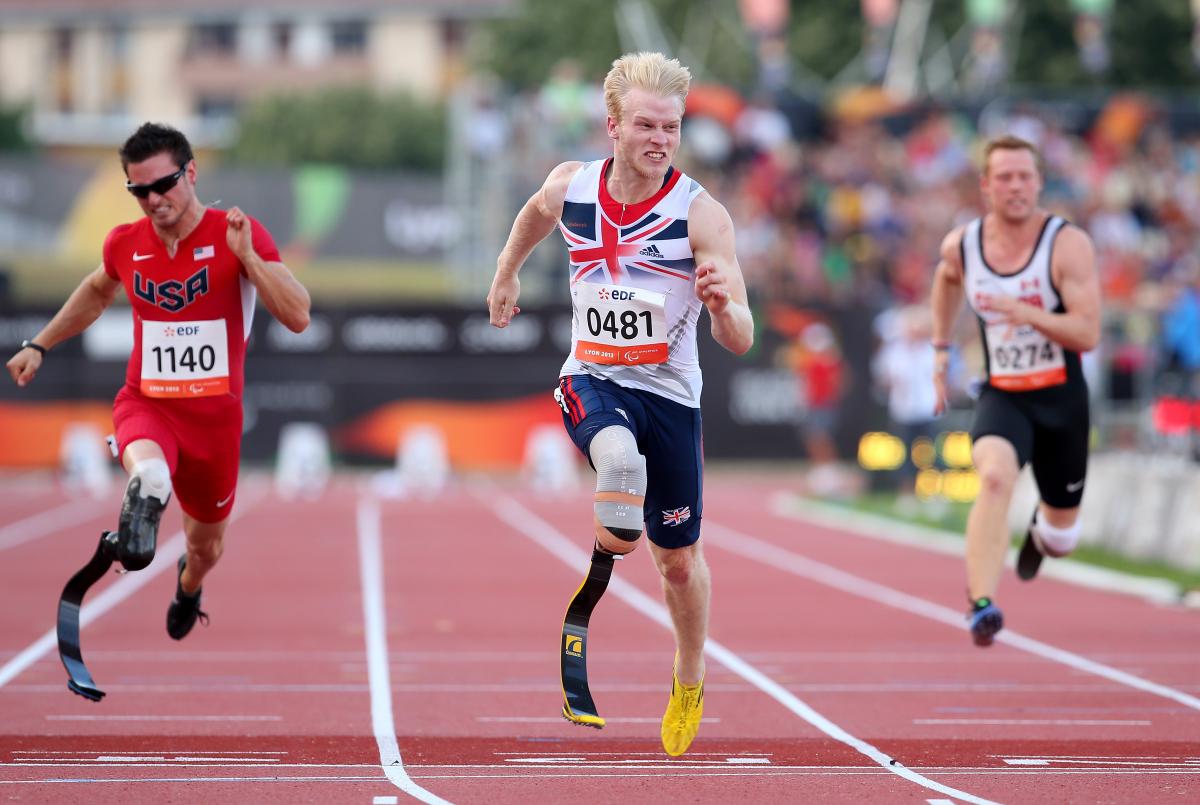 “I’m very lucky - I shouldn’t have got away with that, but at the end of the day it’s about talent,”

Despite a poor start, the 20-year-old managed to stay just ahead of American Richard Browne, who set a new world record in qualifying the day prior.

“I’m very lucky - I shouldn’t have got away with that, but at the end of the day it’s about talent,” said Peacock. “To be honest with you, my 10.87 yesterday wasn’t me trying. I didn’t have a great start again today, I ran upright from about 50m onwards and still managed to run that time.

“I thought my time was going to be quicker, I shouldn’t have got away with that stumble.”

Alan Fonteles Oliveira raced to victory in the men’s 100m T43, showing just why he is the poster boy of Rio 2016 as he added the shorter sprint title to the 200m gold he won on Sunday (21 July). The Brazilian clocked 10.80, a new championship record, and just 0.03 seconds off the world record he set in Berlin last month.

Blake Leeper and Joshua Kennison took silver and bronze for the USA, respectively.

There were no surprises as Brazil grabbed all three medals in the women’s 100m T11. Angola’s Esperanca Gicaso was clearly feeling the pressure as she jumped the gun, becoming the first athlete to receive the red card so far these World Championships.

With three left in the field it was simply a matter of who took which colour – although it would always have been hard to bet against defending champion Terezhina Guilhermina.

The 34-year-old duly lived up to expectations, taking the title with relative ease, and a time of 12.16. Jerusa Santos won silver and Jhulia Santos the bronze.

Russia’s Dmitrii Safronov powered to the line in the final 50m of the men’s 100m T35 to take gold in a championship record time of 12.49 ahead of Iurii Tsaruk of the Ukraine.

Nineteen-year-old Raymond Martin of the USA kept his cool to catch Salvador Hernandez in the closing stages of the 100m T52 after the Mexican sped out the blocks first. The win keeps Martin’s hopes of five world titles alive, with three in the bag and just the 200m and 400m to go.

Great Britain’s Paralympic champion Richard Whitehead had to fight hard to retain his 200m T42 title, after a poor start. But his steely determination paid off as he battled his way through the field, passing Australian Scott Reardon in the final 20m, and crossing the line in 24.95.

“It was tough today,” said Whitehead. “I had a bit of bad situation last week. I broke one of my feet whilst out training then had a quad injury. It was all about crossing the line first, I really dug deep in that last 20m, it was so tight. That was probably the hardest last 50m in a 200m I’ve ever had to do.”

Reardon had to settle for silver – although he did get the better his German rival Heinrich Popow, who finished third, just as he did in London last year.

Korea’s Min Jae Jeon held on for gold in the women’s 200m T36 after running a strong bend, with Germany’s Claudia Nicoleitzik improving on her bronze in 2011 with silver this time.

Tatyana McFadden showed everyone how it’s done in the 800m T54, pushing off strongly to take an early lead before leaving the rest of the field in her wake as she took her third title of Lyon 2013 in world record time.

The American clocked 1:44.44 to continue her clean sweep of medals, with the 100m, 400m and 1,500m still to come. Silver went to Manuela Schaer, with her Swiss compatriot Edith Wolf taking bronze.

“It’s unbelievable – it was really tough but I was confident in my training and I trusted myself. The support from fans has been helpful as well. I am quite positive for the 100m even though it’s going to be such a competitive race once again.

China’s Hongzhuan Zhou set a new championship record qualifying for the final of the women’s 800m T53 yesterday, and she was on top form once more, adding the world title to the Paralympic gold she won last year.

Pushing for home with 250m to go, Zhou held on valiantly down the home straight, finishing ahead of the Australian duo, Angela Ballard and Madison de Rozario.

Silver medallist in the javelin F11 two years ago in New Zealand, Anibal Bello got the better of the 2011 world champion Vitalii Telesh this time around as he threw 46.17m to win Venezuela’s first gold medal of the Championships, over 6m clear of the Russian.

Birgit Kober continued Germany’s success in the women’s field events Javelin F33/34, throwing 27.45m – a new world record – in her opening attempt to defend the title she won in 2011, whilst Reinhardt Hamman’s second throw of 45.72m was enough to take gold for South Africa in the javelin F37/38. Mexico’s Estela Salas took the title in the women’s javelin F52/53.

The Ukraine’s Dmytro Prudnikov set a new personal best of 7.15m in the long jump F20, whilst it was silver and bronze once again for Croatia’s Zoran Talic and Portugal’s Lenine Cunha, medallists at the Paralympic Games 11 months ago.

Russia won the 4x100m T11-13 once again, having taken the title in New Zealand, with the USA clinching silver and France - much to the delight of the crowds – winning bronze. 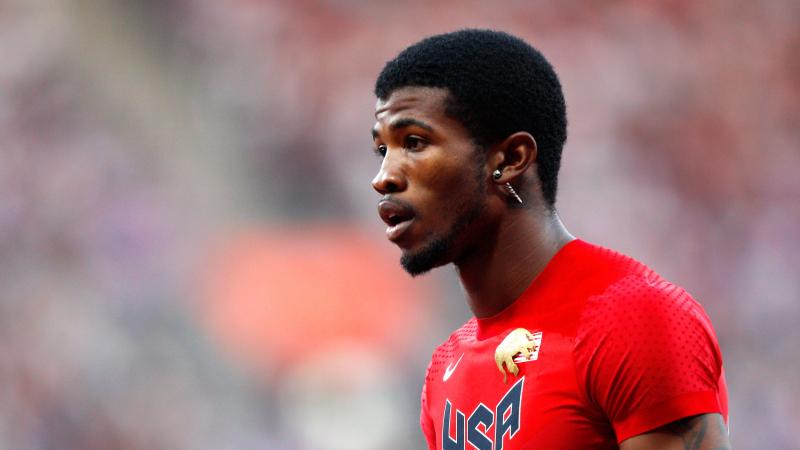 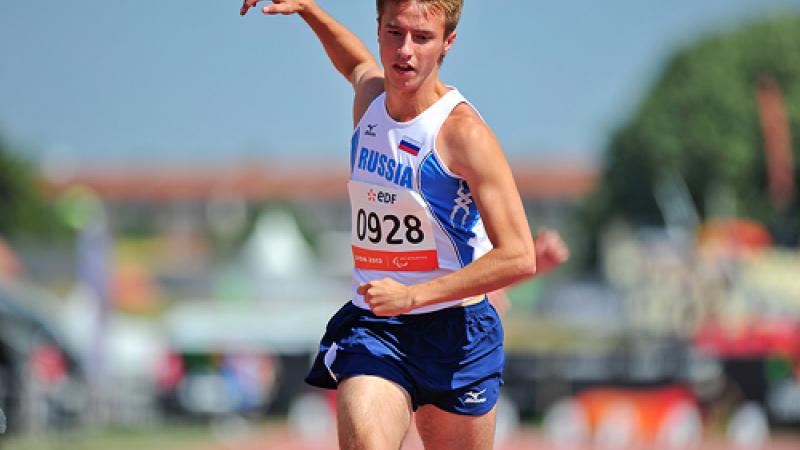 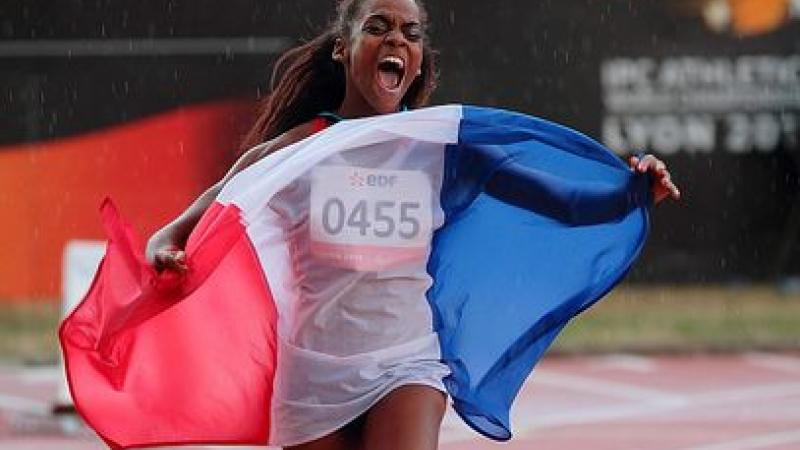 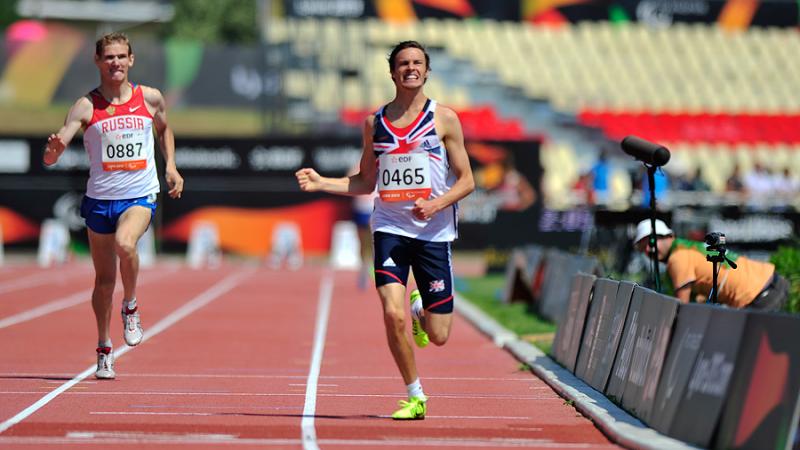 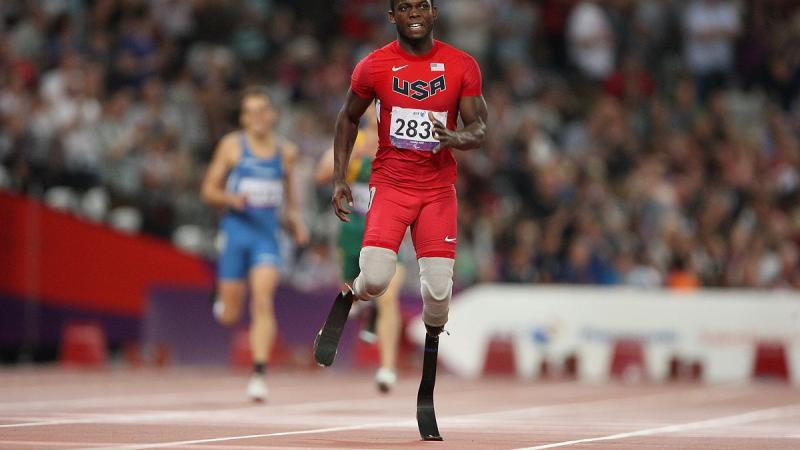