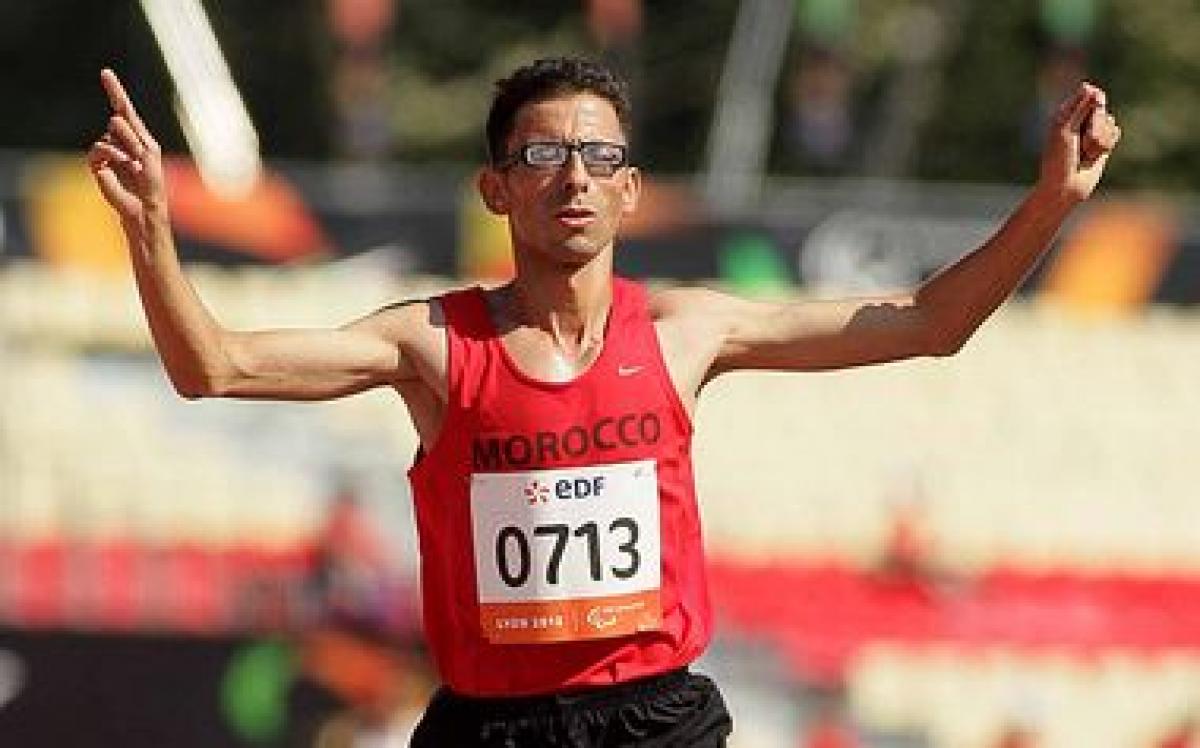 “The aim today was clear. I was going for the world record. I tried to save energy in the 5,000m two days ago to be ready for this one."

Morocco’s long distance star El Amin Chentouf destroyed the field in the 10,000m T12, the opening event of competition on day four in Lyon, to take his second gold of the 2013 IPC Athletics World Championships.

The 32-year-old ran his own race at the front but still managed to maintain a terrific pace, finishing almost two laps clear of Algeria’s silver medallist Nacer-Eddine Karfas to break the 30 minute mark for the first time with a new world record of 29:38.85.

Chentouf, who won the 5,000m T12 on Saturday (20 July), will now contest the marathon on Sunday 28 July where he faces Spain’s Paralympic champion Alberto Suarez Laso.

“The aim today was clear. I was going for the world record. I tried to save energy in the 5,000m two days ago to be ready for this one,” he said.

“Now I am tired, I need to recover in order to perform well in the marathon, and then the gold medals will come in threes.”

Victory in the men’s 800m T11 also went to form as Brazil’s Odair Santos won his second gold of the Championships to briefly move his country up to second on the medal table behind the USA.

Santos, who won 5,000m gold three days ago, ran a season’s best 2:00.50 after Turkey’s Hasan Huseyin Kacar led the field out hard on the first lap.

“I am really happy, I had good sensations on the track, even if I did not do a good start. I got better after the first lap, I accelerated and overtook the second and the first to finally reach the gold,” Santos said.

The 32-year-old won three golds at the World Championships in New Zealand and remains on track to match that success with the 1,500m still to come.

Great Britain’s Aled Davies also picked up his second gold medal in Lyon, bettering the silver from two years ago as he took the title in the men’s discus F42 with a throw 47.62m in his final attempt – more than 6m clear of silver medallist Marinos Fylachtos of Greece, with Dechko Ovcharov taking bronze.

“I was the favourite and I feel in great form, so I expected to win,” said Davies. “I made it difficult for myself but managed to smash it. I know what I am able to do, I was very close to the world record and I am sure that someday I will take it off Fanie Lombard – the only question is when.”

Russia also took gold in the women’s long jump F46, thanks to Nikol Rodomakina who leapt to 5.92m – a new personal best – on her way to victory.

Another field event victory for Germany came courtesy of Marianne Buggenhagen in the women’s discus F54/55/56, with her compatriot Martina Willing taking silver.

In the morning’s qualifying events, Libby Clegg was the fastest of those bidding for gold in the women’s 100m T12, although she’ll have to watch out for the Ukrainian Oxana Boturchuk, winner of the 200m T12 on Sunday.

French 200m T37 champion Mandy Francois-Elie is also chasing double sprint gold after progressing to the finals of the 100m in championship record time. The 23-year-old clocked 13.70, just 0.02 shy of her world record.

And in the women’s 100m T38 semi-finals, Brazil’s Veronica Hipolito made her intentions clear clocking a new world record 13.19 to go through as favourite.

Cuba’s Paralympic silver medallist Raciel Gonzalez Isidoria was the fastest qualifier in the sole men’s sprint event of the morning, the 100m T46 semi-finals, going through along with the likes of Australia’s Gabriel Cole and defending champion Yohansson Nascimento of Brazil.