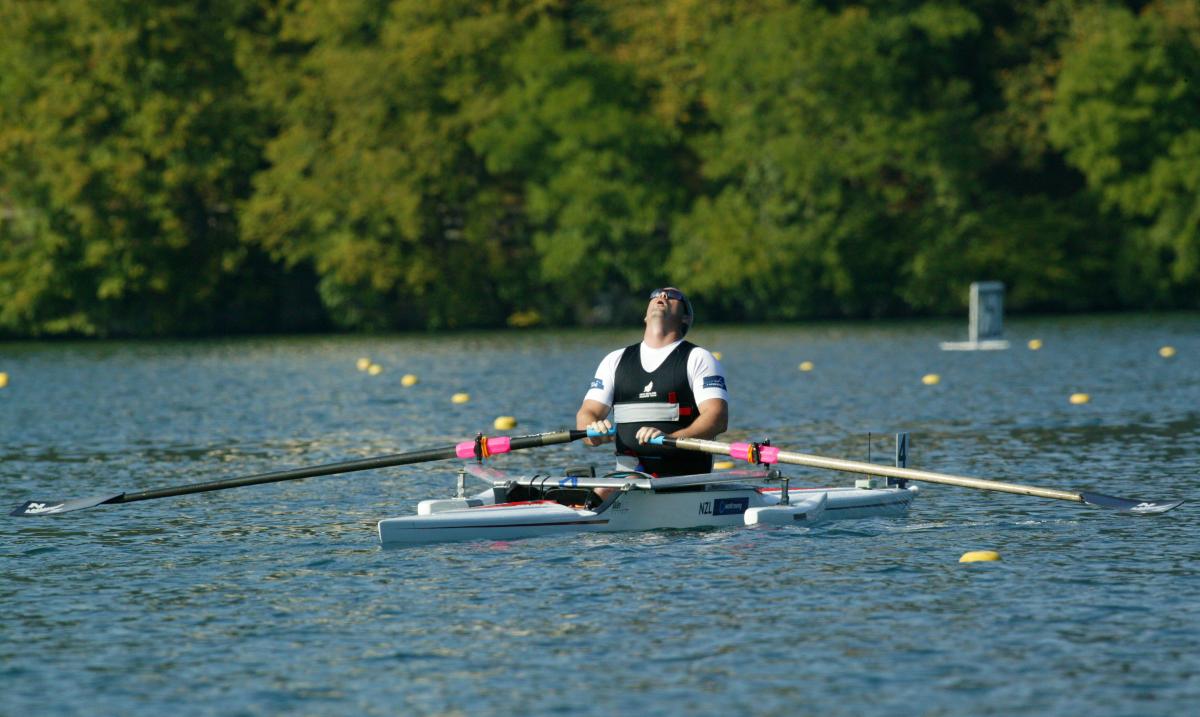 Daniel Mcbride of New Zealand after the Final B of the AS Men's Single Sculls at the 2011 World Rowing Championships in Bled, Slovenia.

"The Paralympic Games are the pinnacle of Paralympic Sport globally and I have no doubt that these athletes will do all of New Zealand proud when they take on the world in London."

With just 100 days to go to the Opening Ceremony of the Paralympic Games in London, Paralympics New Zealand named further athletes to represent New Zealand in the sports of Cycling, Rowing and Shooting.

Chief Executive of Paralympics New Zealand, Fiona Allan, was delighted to announce these team members: “With just 100 days to go until the opening of the London 2012 Paralympic Games it is fantastic to announce the selection of a further 10 athletes,” she said.

“The Paralympic Games are the pinnacle of Paralympic Sport globally and I have no doubt that these athletes will do all of New Zealand proud when they take on the world in London.”

New Zealand Paralympic Team Chef de Mission Duane Kale understands the significance of the 100-day milestone for athletes. He is one of New Zealand’s most successful sportsmen, swimming his way to four world records and six individual medals at 1996 Atlanta Paralympic Games.

“The 100 day milestone is significant”, he says, “I recall the anticipation of the build-up to the 1996 Paralympic Games and counting down the days until the Opening Ceremony.

“London will be an outstanding games and a significant challenge lies ahead of the New Zealand Paralympic team with our target of 18 medals.”

Danny McBride (Rowing) said: “I am thrilled to be named in the team to compete at the Paralympics, it has been a dream for a long time to get there, and this has made all the hard work and sacrifices worth it.

“However, I am not going to just make up numbers and I am firmly setting my sights on the A Final and leaving absolutely nothing in the tank in a pursuit for a medal. I am training harder and better than I ever have and I am relishing the challenge ahead.”

Michael Johnston (Shooting) said: “Competition is tough but my build up for the London 2012 Paralympics has been going well, and I’m looking towards bettering my previous Beijing results with a Gold medal.”

Paralympics New Zealand Programme Director for Cycling, Brendon Cameron said: “I am thrilled that the programme has qualified six bikes for London. The programme and everybody involved has worked hard over the past three years to get to this point and I think all the athletes, those who were selected and also those who narrowly missed, have transformed themselves into world class athletes.

“The internal fight for the spots within the team was also world class with every athlete selected being ranked within the top five in the world within their classification.”

The following athletes have been announced: