Surprise winners in both men's and women's singles at Wimbledon. 17 Jul 2017
Imagen 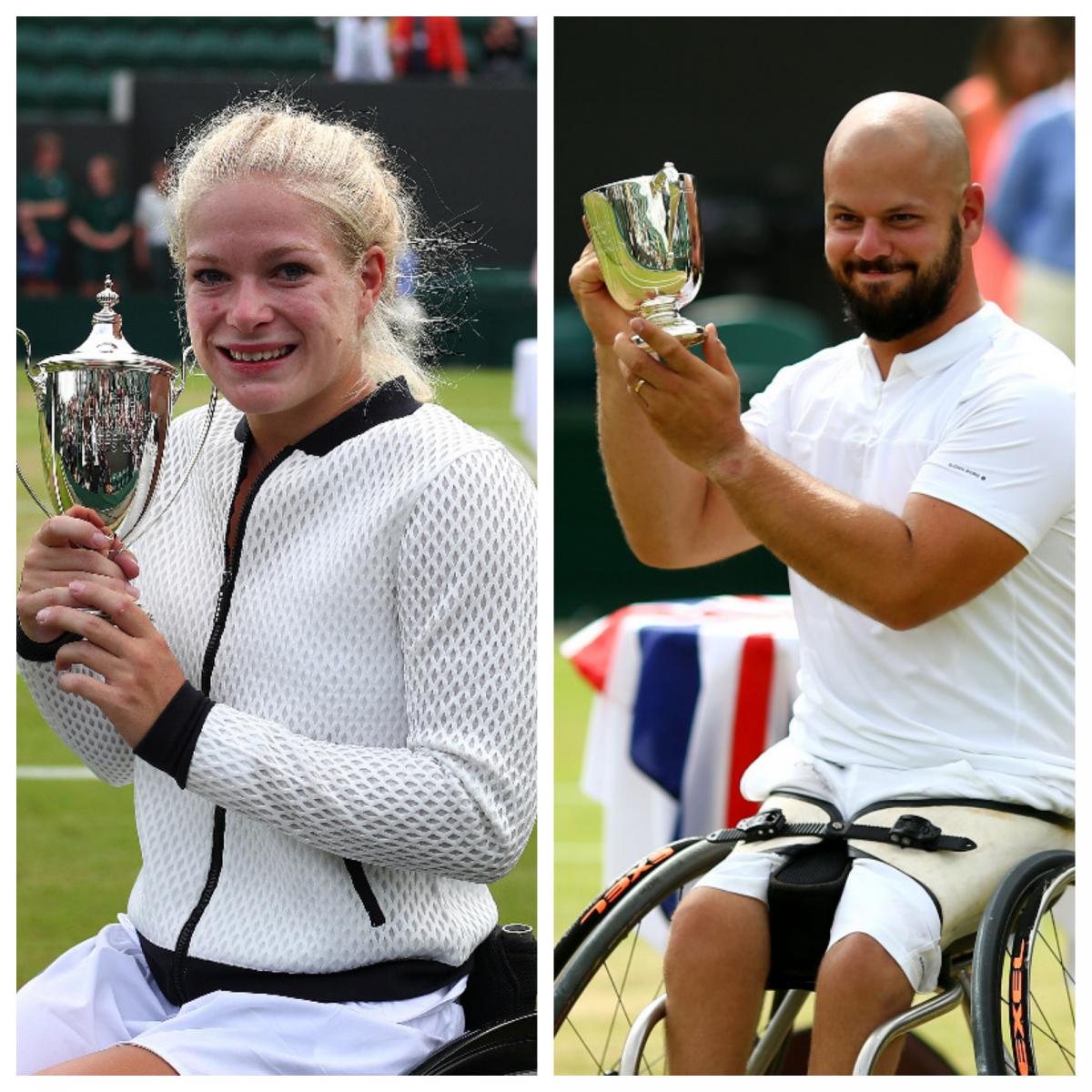 Stefan Olsson, Diede de Groot took top honours in the men’s and women’s singles at Wimbledon to win their first Grand Slam titles ever, in 2017.

Stefan Olsson and Diede de Groot sprang consecutive surprises as they took top honours in the men’s and women’s singles at Wimbledon to win their first Grand Slam titles ever, last weekend.

The Swedish may have been ranked No.7 of the eighth contestants, but it quickly became obvious that he was the man to beat after defeating Great Britain’s double Paralympic champion Gordon Reid and Japan’s Shingo Kunieda.

In the final, Olsson defeated Argentina’s new world No. 1 Gustavo Fernandez 7-5, 3-6, 7-5 for his first Grand Slam success in 19 years of playing the sport.

“He played a great match because he took the chances when he had them,” said Fernandez. “I’m very happy for him because I think he’s a good guy. He deserves it, he’s done a great job during the years. He’s a fair winner.”

Probably the only person who did not fully grasp the magnitude of his success was Olsson himself. He kept shaking the trophy as if testing that it was real and it wasn’t a dream. Olsson had won the doubles at Wimbledon in 2010 with the now-retired Robin Ammerlaan, of Netherlands, but this was a completely new experience for him.

“The feeling is indescribable, the best in the world,” he said. “I won the gold medal at the London 2012 Paralympics (with Peter Vikstrom) but this beats it by a mile!

“I was stressed a bit because I knew this could be my only chance of winning a Grand Slam.

“I have the potential to win a lot of Grand Slams but you have to do the work as well. I haven’t got any big sponsors so I didn’t know if I was going to play after this – that made it a little bit extra tense.”

“I actually think the little one has helped a lot there. He’s taken away the pressure a little bit. The baby has put everything in perspective – tennis is great but there is something bigger out there and that’s him and my family.”

In the men’s doubles, Great Britain’s Reid and Alfie Hewett had to fight every inch of the way during which they passed up on four match point opportunities before beating the French pair Stephane Houdet and Nicolas Peifer 6-7(5), 7-5, 7-6(3) in front of a packed and noisy audience.

“I’ll never forget it, it was amazing,” Hewett said. “We never thought we’d play on a packed out Court Three,” added Reid. “Hopefully, we’ve played our part in the growth of the sport.”

Two years ago, the legendary Esther Vergeer named Diede De Groot as her long-term successor. That assessment looked as though it could soon be coming to fruition because the 20-year-old Dutch was an impressive winner of her first Grand Slam title last Saturday.

De Groot beat Sabine Ellerbrock 6-0, 6-4 to win the Wimbledon women’s wheelchair tennis singles title. It could be the first of many Grand Slams.

She had lost to the same opponent the last time they met, just six months ago at the Australian Open, when the German won in straight sets.

“At that time I was not feeling very well,” said de Groot. “It [Grand Slams] was all very new to me and I struggled finding my rhythm. Knowing that now I felt very well and I really liked the surface.” said de Groot.

De Groot hits a heavy ball and looks to bring about a swift conclusion to rallies. “I like short rallies,” she said. “Hit the return quite deep and make sure I make a lot of pressure from the beginning of the rally and I think that really suits the court. She played very smart and I had to find my way around that.

De Groot would also like to see bigger fields in the Grand Slams, if only to help top players ease themselves into their form.

“I think it’s quite important for the sport to grow,” she said. “For me it was very tough to get into the top eight because the top eight players play the Grand Slams. They’re sort of like an elite group and so to get into that without playing the Grand Slams was quite hard, so having a bigger field would help lower ranked players to up their game.”

Just for a change, the Dutch were denied victory in the women’s doubles final when Jordanne Whiley, of Great Britain, and Yui Kamiji, of Japan, beat Marjolein Buis and de Groot 2-6, 6-3, 6-0.

“Although a lot of doubles partnerships get on well, me and Yui just know each other inside and out,” said Whiley, for whom this was her tenth Grand Slam title in total in singles and doubles. “We spend a lot of time together off the court. We really do know what makes each other tick.

“I think today our first set didn’t go to plan. I wasn’t playing so well, Yui wasn’t feeling so confident. Sometimes we don’t even have to speak to each other, it’s simple little winks or eye contact.

“We haven’t played together for a year, I’ve had a lot of time out, but we can still come back and win Wimbledon again.”

Full stories can be read on the International Tennis Federation’s website.