There will be 243 athletes from 31 different countries in Italy this week for the first stage of the UCI Para-Cycling Road World Cup. 06 Jun 2013
Imagen 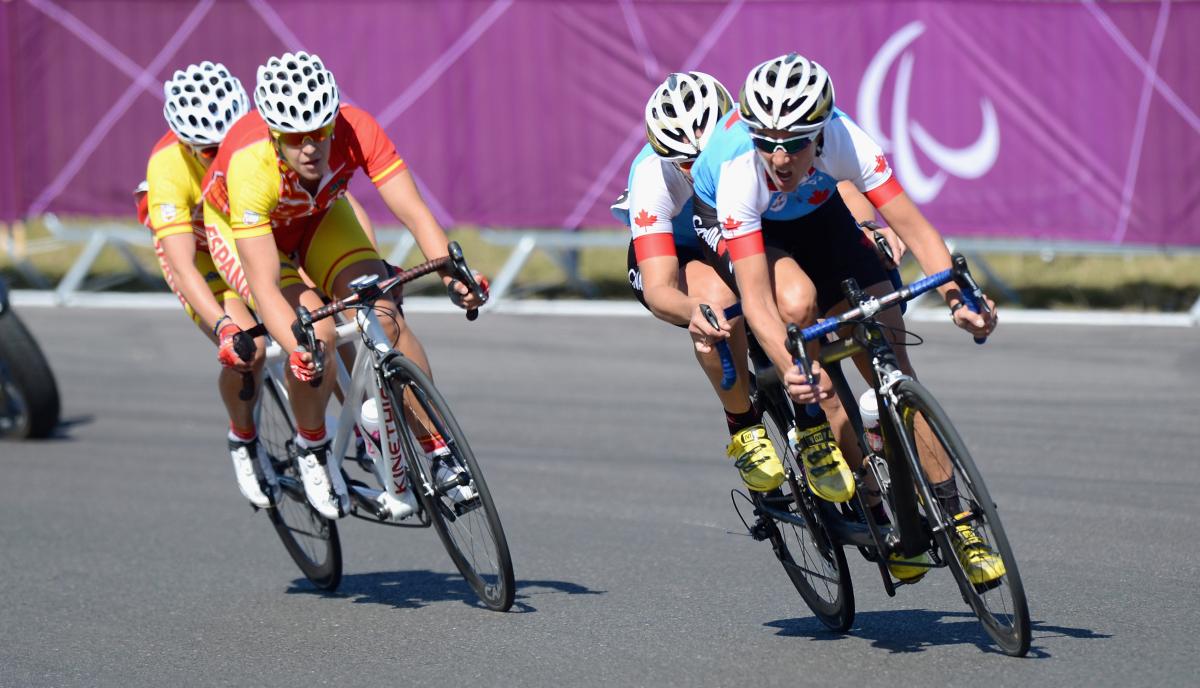 Robbi Weldon and Lyne Bessette of Canada lead Josefa Benitez Guzman and Maria Noriega of Spain in the women's road race individual B on Day 10 at the London 2012 Paralympic Games.

Robbi Weldon, a top nordic skier from Canada, was piloted by Lyne Bessette to win gold at the 2010 UCI Para-Cycling World Cup Championship road race and will be one to watch this summer.

The fourth-annual UCI Para-Cycling Road World Cup begins its first round this week (7-9 June) when the event commences in Merano and Marlengo, Italy. The three-day affair will feature a total of 243 participating athletes representing 31 different countries, including 29 from host nation Italy.

This week’s competition will be the first of the three-part World Cup tour that includes stops in Segovia, Spain, and Matane, Canada, later this summer. The 2013 UCI Para-Cycling Road World Championships take place in Baie-Comeau, Canada, from 29 August-1 September.

In addition to the event-leading 29 athletes from Italy, other countries with significant participation include the Czech Republic (20), Germany (17), France (15) and the Netherlands (15).

The event begins on Friday (7 June) at 9:00 with a time trial in the Municipality of Marlengo on a fast city circuit featuring perfect road conditions. The time trial course will challenge runners from a technical aspect and features a steep climb to the finish.

Road races take place on Saturday (8 June) beginning at 11:00 and Sunday (9 June) 10:00 in Merano, a town in the province of Bozen. It sits at an altitude of 325 metres and the course features a variety of challenges for the field of athletes, including cobbles, a technical passage with a downhill section and long straight-aways with constant and gradual climbing.

The event, as always, features a number of prominent athletes who have experienced great success in cycling at the international level.

Host countryman Alex Zanardi returns to the World Cup following a highly successful appearance at the London 2012 Paralympic Games that saw him claim two gold medals and participate on a relay team that won silver. The former F1 driver was the 2011 silver medallist in the individual H4 time trial at last year’s Road World Championships.

Jiri Jezek is one of 20 athletes from the Czech Republic who is participating in this year’s World Cup. He has excelled in winning medals at each of the past three Paralympic Games including a silver at London 2012.

Robbi Weldon, a top nordic skier from Canada, was piloted by Lyne Bessette to win gold at the 2010 UCI Para-Cycling World Cup Championship road race and will be one to watch this summer.

Rafal Wilk of Poland picked up two gold medals last year in London, capturing the H3 time trial and the H3 road race, and will vie for the 2013 World Cup in those events.

In addition to the notable returnees, this year’s UCI Para-Cycling Road World Cup will feature a fresh look, as 43 athletes (approximately 17 per cent of the participating competitors) are new to the event and have never been classified.

The 2013 season provides athletes an opportunity to begin their road to the Rio 2016 Paralympic Games.