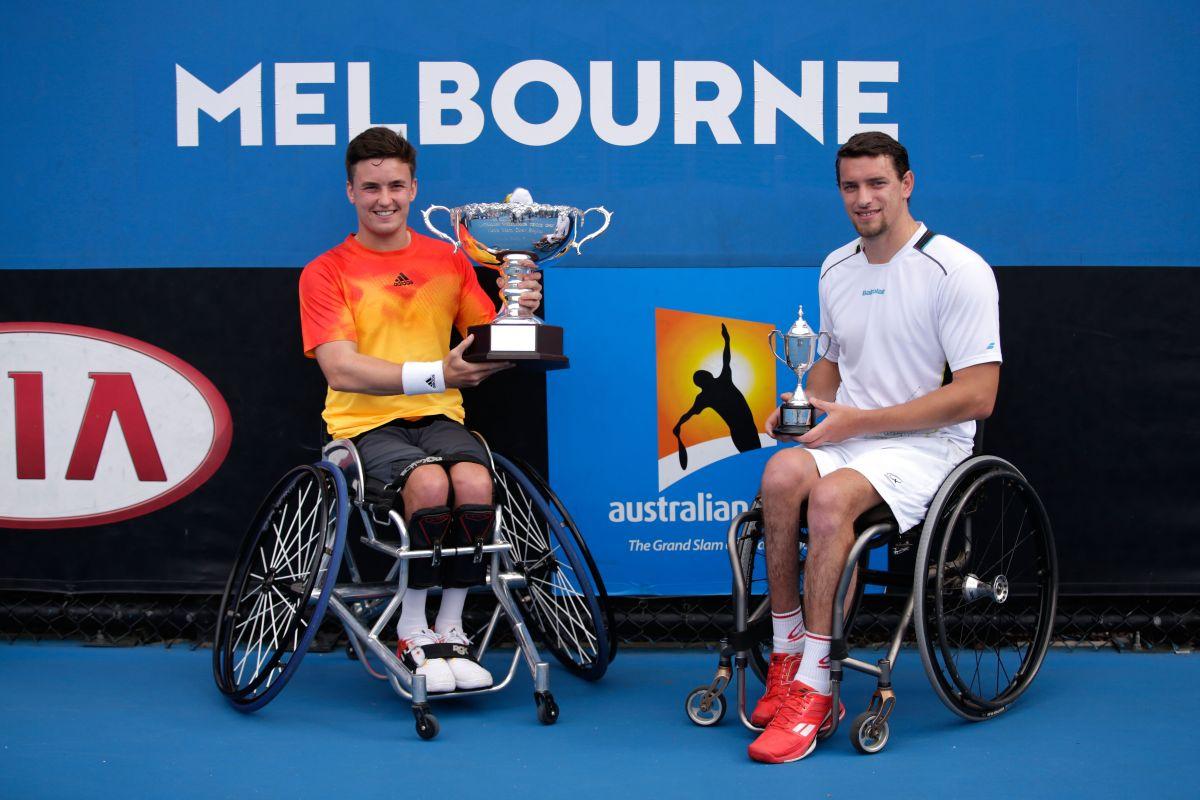 "It took me a couple of seconds to realise what was going on, then I heard everyone going crazy and it really hit me."

After ending the Melbourne Park dominance of Shingo Kunieda earlier this week, Gordon Reid took over the mantle of Australian Open wheelchair men’s singles champion as the Brit won his first Grand Slam singles title with a straight-sets victory over Belgian Joachim Gerard.

In a meeting between two first-time Grand Slam singles finalists, 24-year-old Reid produced a sublime performance as he edged the first-set tiebreak after saving a set point and then went on to close out a 76(7) 64 victory in one hour and 37 minutes.

Reid said: “When it got to match point, I couldn’t quite believe it. Then when the final point was over, the feeling was just one of pure joy. It took me a couple of seconds to realise what was going on, then I heard everyone going crazy and it really hit me.

“The first set was really close, we struggled to break each other’s serves and made it hard for each other to get break points. I saved set point in a really close tiebreak and I’m really pleased that my game held up.”

Sitting in the stands to watch Reid were some of his childhood friends, who had flown in from the West Australia city of Perth to show their support. One of them was Gary Peak, who was with Reid on the day he was struck down at the age of 14 with Transverse Myelitis, a rare condition which attacks the spinal cord and left him paralysed from the waist down.

Reid said: “Gary was the one who, the day this happened to me, was with me. It was a Friday night and when I stood up off my bed, my legs just kind of gave way under me. I had probably ten friends round and Gary was one of them.

“The next day I was fine again, but over the course of the day I lost all feeling from the waist down, terrible pains all the way down. Gary was the one who sat with me all day, as it happened. He just spent time with me and kept me company until the ambulance came.

“It makes him being here even more special. He’s literally been there through the whole journey, so it was amazing to have him up there, cheering me on and giving me a big hug at the end.”

Reid came agonisingly close to two titles in one day with Kunieda in the men’s wheelchair doubles final. The pair were 5-0 up in the deciding set with two match points before France’s Stephane Houdet and Nicolas Peifer staged a stunning comeback to triumph 63 36 75 in three hours and nine minutes.

With the backing of the substantial home support, Dylan Alcott was inspired as the Australian 25-year-old recovered from a rocky start to beat American rival David Wagner 62 62 in 66 minutes and defend his quad wheelchair singles title.

Alcott said: “I was really tired early on. I was down 2-0, I forgot how to play tennis I reckon and I thought ‘oh no, this is going to be bad’. Then I just composed myself, swung out and played awesome. It’s just such a good feeling to do everyone proud and win.

“It’s so cool playing in front of thousands of people at your home Grand Slam. I’ve been campaigning for Paralympic sports to get more exposure since I was 14 years old and it’s finally happening. To have thousands in the stands is just unbelievable.”

Alcott received the congratulations of Novak Djokovic as he was paraded around Rod Laver Arena at the conclusion of the Serbian’s practice session. Alcott has certainly caught the attention of some high-profile names and has struck up a friendship with Andy and Jamie Murray.

Alcott said: “In the locker room, although I do get a bit nervous when Roger Federer walks past because I do like him, I think if you met Barack Obama or anybody, if you just treat them like normal people they’ll love that.

“In the locker room I will go up to Andy who happened to have a locker next to me and just talk to him, and I think they like that. They [the Murray brothers] are two of the nicest guys I’ve ever met.

“I won my first match and came in the next morning and Andy was like ‘well done mate, you played awesome’. I was like ‘how do you know that?’ and he said ‘I watched it on the app’.”

Jiske Griffioen successfully defended her women’s wheelchair singles title as the 30-year-old Dutchwoman defeated friend, doubles partner and compatriot Aniek van Koot 63 75 in one hour and 26 minutes, coming through some nervy moments towards the end to convert her fourth match point.

Griffioen said: “I think I did what I had to do. Up until 6-3 5-2, I was just playing better. I was making more pressure and less mistakes, then at the end I got a little bit nervous. She took all those match points back so I was really happy to close it out.

“It feels great. Last year was a big year for me. It was my first Grand Slam singles title and to come back this year, it felt good straight away because you have great memories. I am really happy to retain my title.”

This is a big confidence booster for Griffioen at the start of a Paralympic year. She said: “Last year was a great year for me but this is a Paralympic year and you have a little bit more pressure. You’re world No. 1 and everybody is after you.

“To start the year with the Super Series title in Sydney and now [winning] this Grand Slam, it just shows that I am here to compete and I can handle the pressure of being world No. 1.”

Griffioen and van Koot later suffered defeat in the final of the women’s wheelchair doubles as the Netherlands’ Marjolein Buis and Japan’s Yui Kamiji triumphed 62 62.