Great Britain’s Sarah Storey rounded off her faultless Paralympic campaign today with her fourth and most decisive victory of the Games. 07 Sep 2012
Imagen 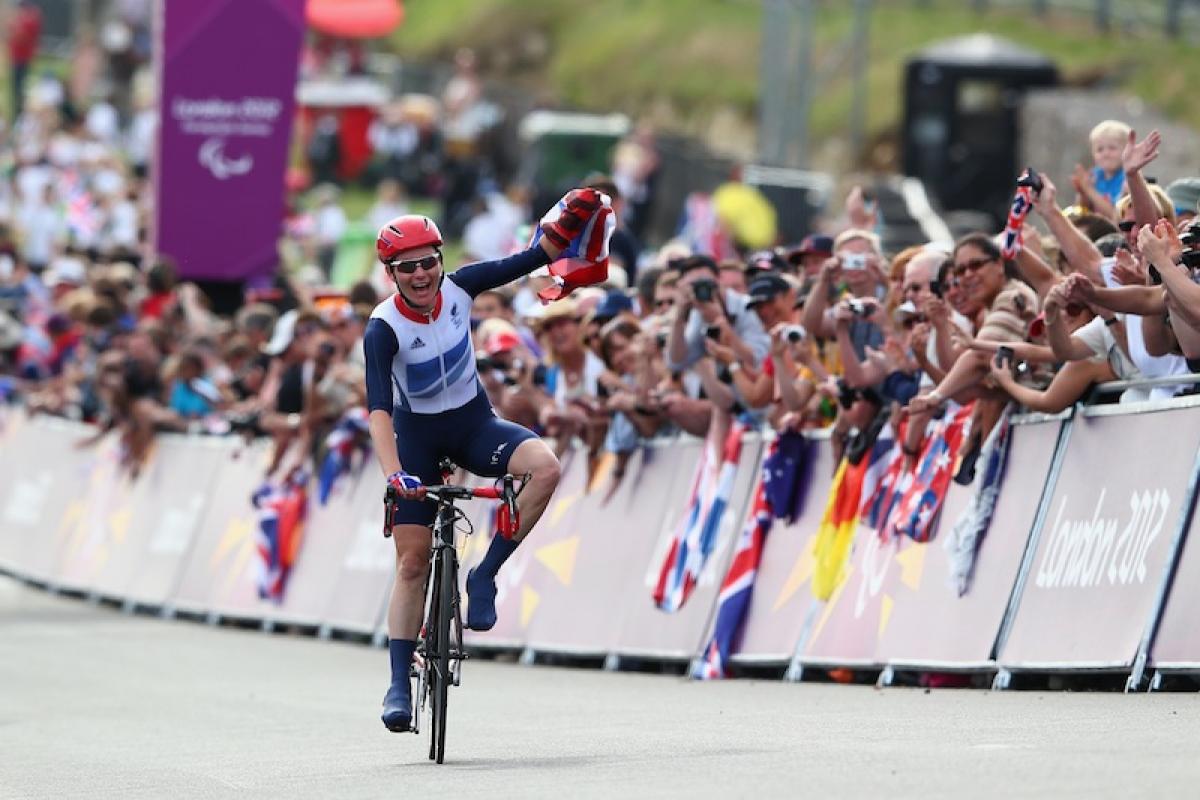 For much of the women’s 48km C 1-3 race, it was a four-way battle for the three medals between the four fastest from the time trial of 5 September.

After two gold medals in the Velodrome and another in the road time trial on 5 September, Great Britain’s golden woman Sarah Storey completely dominated the women's C 4-5 Road Race at Brands Hatch on the second day cycling road competition. At the front from the beginning of the 64km race, she extended her lead on each lap, finishing with a huge 7:22 lead over silver medallist Anna Harkowska (POL). Third place went to Kelly Crowley (USA).

“I just had gas to spare and got away,” explained Storey at the finish. “I just can’t believe I pulled it off today. I am so chuffed ... And I’m just so please to be finished now!”

Raced over the same distance, the men’s C 1-3 event was a much closer affair, with Italian Roberto Bargna winning in a sprint finish over Germany’s Steffen Warias (silver medallist) and Australian David Nicholas (bronze medallist).

“Towards the end I tried to maintain the position, riding on the wake of my opponents and then I sprinted to the finish. I can’t describe my feelings yet,” he said afterwards.

The men’s C 4-5 race saw the Ukraine’s Yegor Dementyev make it two in a row after his victory in the time trial on 5 September. He made his move in the final of the ten-lap, 80km race which had been animated throughout by several attacks, in particular from Brazil’s Soelito Gohr and later from Australian Michael Gallagher.

The Australian led in the second to last lap but Dementyev not only caught him but rode straight past. He was followed by China’s Xinyang Liu and Italy’s Michele Pittacolo, who rode through for silver and bronze. The new Paralympic champion said he followed his coach’s tactical instructions.

“I needed to follow the riders and now allow them too much of a lead ... and save most of my efforts for the finish. I can’t describe this feeling. It’s wonderful.”

For much of the women’s 48km C 1-3 race, it was a four-way battle for the three medals between the four fastest from the time trial of 5 September. Silver medallist on the first day of cycling road competition, Tereza Diepoldova of Czech Republic was dropped in the last lap, leaving Chinese Sini Zeng to race through for gold while Germany’s Denise Schindler grabbed silver after a sprint finish with time trial Paralympic champion American Allison Jones.

“I did not expect this,” said Zeng. “Road racing in China is mostly on flat ground. When I got to Brands Hatch and saw the mountains and the curves I wasn’t expecting to finish.”