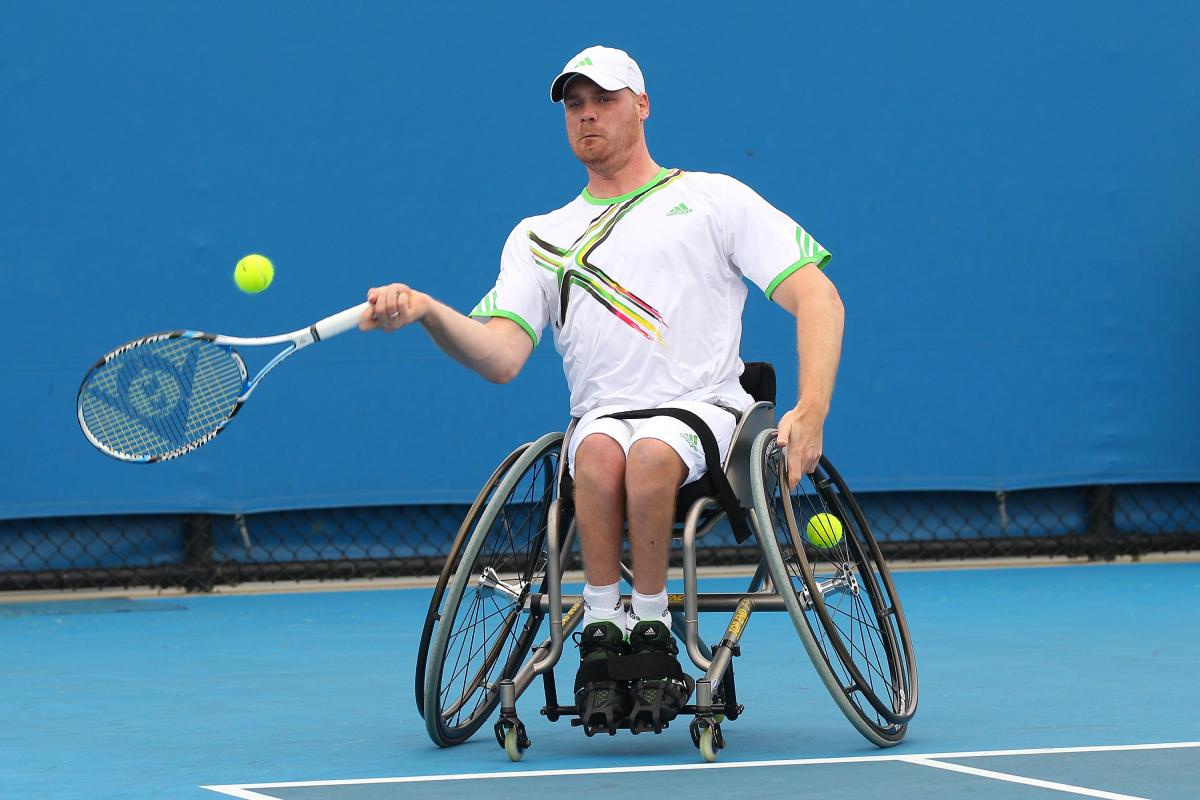 Maikel Scheffers (NED) plays a forehand in his quarterfinal match against Stephane Houdet of France at the 2011 Australian Open in Melbourne, Australia

For the first time since the Australian Open Wheelchair Championships have been held alongside the second week of the year’s first Grand Slam, there were Dutch winners of both the men’s and women’s singles titles.

However, world No. 1 Scheffers had a tough fight for his second-career Grand Slam title after dropping the first set of the men’s final to French world No. 5 Nicolas Peifer. He raced back to win, 3-6, 7-6 (2), 6-0.

With both players having reached their third Grand Slam final apiece, Peifer looked like he might be on course to land his first Grand Slam title after he came from 3-1 down in the opening set to convert two of his six break-point opportunities.

Scheffers converted his second break point opportunity of the match to level at 4-4 in the second set, but Peifer continued to have the edge as he served for the match at both 5-4 and 6-5, only for Scheffers to force a tiebreak.

The Dutchman raced into a 6-2 lead in the tiebreak, converting his second set point to force the decider and then broke the

Frenchman’s serve to love to lead the third and final set, 3-0, and the cruise to victory.

“I feel really happy at the moment. It was a big fight between us. Nico is a good player, so yep, I feel good," said Scheffers told the International Tennis Federation (ITF).

"I just talked to my parents and my girlfriend and they're really happy, as well, and yeah, let's see what I can do this year more. I've got a lot to defend this year, but I like that and it's all about the titles."

Norfolk has started each of the last two Paralympic Games years by winning the quad singles title at the Australian Open, and the 2004 and 2008 Paralympic champion sent a message out to his nearest rivals ahead of London 2012 as he achieved the same at Melbourne Park again this year. However, as with Scheffers, Norfolk had to come from a set down to plant a comeback 4-6, 6-4, 6-2 victory.

The world No. 2-ranked Briton edged into a 3-1 first-set lead, only for world No. 1 and defending champion David Wagner to hit back and secure four games in a row en route to taking the opening set.

But with the help of the fifth of his ninth aces during the match Norfolk came from a break down to lead the second set, 2-1, and he never relinquished the advantage again. He extended his lead to 3-1 after the third deuce game of the set and broke Wagner’s serve to love to level the match.

The fourth game of the third and final set included multiple deuces, with both players having the opportunity to win it, but Norfolk once again had the edge to lead 3-1 and he then held his own serve to love before going on to build a commanding 5-1 advantage.

After Wagner had reduced his errors, to make it 5-2, Norfolk went on to earn himself two match points and only needed the first to regain the title he last won in 2010.

"I struggled for a while out there to find my game, but I love the pressure of playing in a major final and I knew if I stuck with it, I could find my rhythm," Norfolk told the ITF.

"I'm absolutely thrilled with my fifth singles title at the Australian Open and I hope I can use this as my base for a very successful 2012."

Norfolk leaves Melbourne having won both the quad singles and quad doubles titles at the same Grand Slam for the first time in his career, after partnering fellow Briton Andy Lapthorne to win the Australian Open quad doubles title on Thursday (26 January).

The final day of the Australian Open Wheelchair Championships got off to a familiar start as Vergeer powered her way to a successful women’s single title,

After beating Australia’s Daniela di Toro in the 2011 final, Vergeer served up the same dominance against her compatriot and current world No. 2 Aniek van Koot in this year’s final, completing another 6-0 6-0 victory after just 47 minutes. Vergeer ends the 2012 Australian Open having dropped just four games in her three matches.