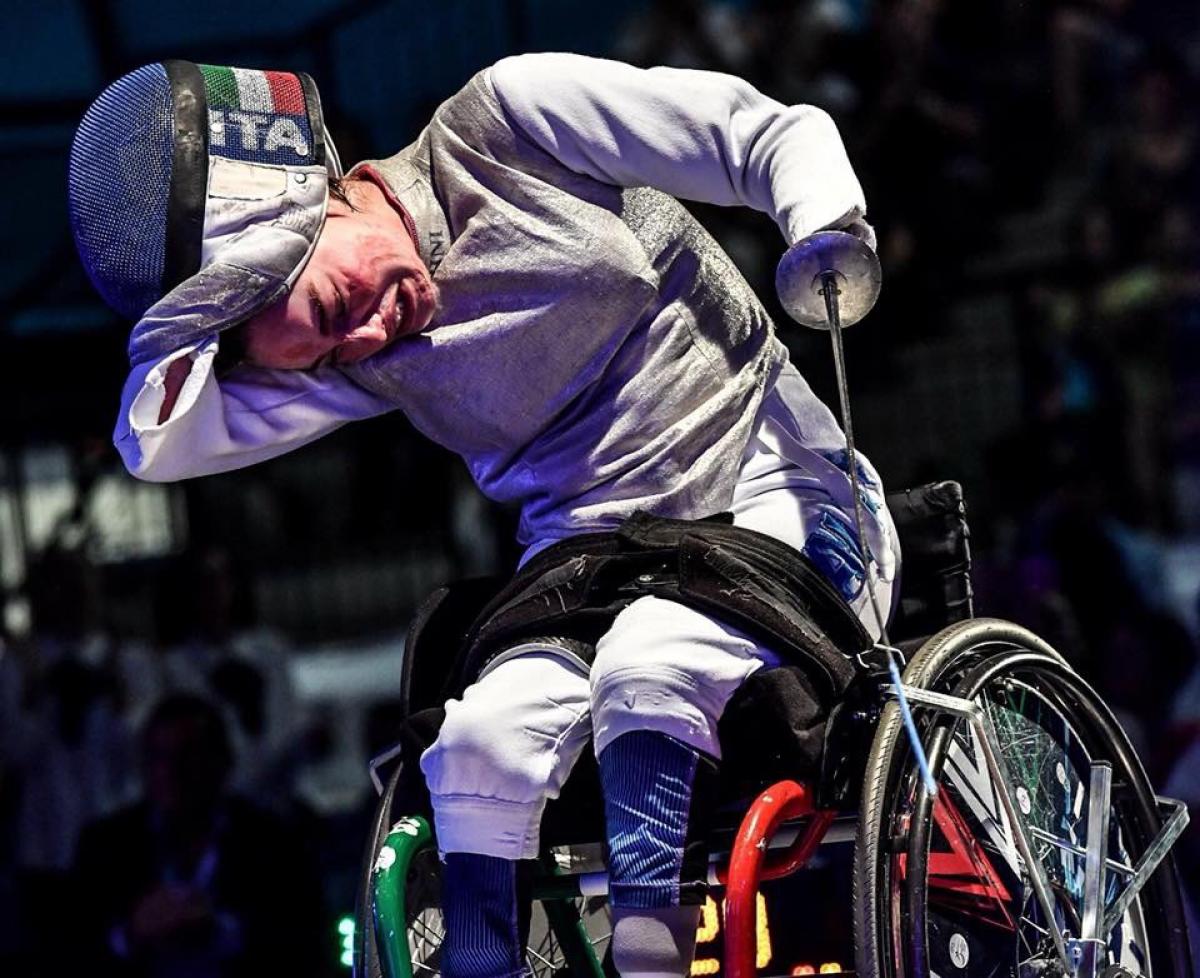 ⒸAugusto Bizzi
By IWAS and IPC

Italy’s Paralympic, world and defending European champion Beatrice Vio did not disappoint on her home piste at the 2018 Wheelchair Fencing European Championships, which wrapped up on Saturday (22 September) in Terni.

In the semi-final it was Alesia Makrytskaya* (15-9) before a clash with Irina Mishurova* in the final – a repeat of the 2016 title match.

Vio, buoyed by her previous results, then dropped just one point against Mishurova to take an emotional home victory.

There was more home joy when Marco Cima won the men’s equivalent.

Cima sailed through his opening match against Poland’s Zbigniew Wyganowski in the men’s foil category B 15-6 but faced a tougher challenge in the semi-final.

Going up against British world champion Dimitri Coutya, Cima just pipped his opponent to advance by one point.

Cima then beat Poland’s Jacek Gaworski with a thrilling 15-13 victory.

"I trained really hard this summer, I never stopped practicing, even when the conditions where difficult,” Cima said.

“In August it is really difficult to train properly, but I put holidays aside to chase this dream. The goal was to win this European Championship even if at the beginning of the season I had a hard time getting results. But I always knew that I was prepared for this competition.”

Pranevich endured some close ties in the build-up, winning two matches by just one point. Coutya was fresher having had a slightly easier path.

The British fencer then executed an impressive display against Pranevich to win the gold with a score of 15-5, improving on his bronze medal from 2016.

“The guy I had [Pranevich], he’s so strong,” Coutya said.

“He’s the Paralympic champion, so to get to the finals with him at such a big competition and compete with him on the European stage is just incredible and it’s a huge honour.”

Ukraine’s Paralympic and European champion Andrii Demchuk proved that he is still the man to beat in the men’s sabre category A.

He went toe-to-toe with Hungary’s 2016 silver medallist Richard Osvath, and survived with a 15-12 scoreline.

“This medal is really important for me because in previous years at European Championships I couldn’t win gold in sabre,” Demchuk said.

“And now since two years [the last two editions] I’ve managed to do it!”

Castro had already secured the world title in 2015 and Paralympic bronze in 2016 in the men’s sabre category B but the Europeans win had eluded him.

That all changed in Terni after he overcame teammate Grzegorz Pluta 15-11 in the final.

In the women’s epee category B Mishurova showed grit and determination in her quarter-final match against defending champion and world title holder compatriot Viktoria Boykova.

Boykova put up a great fight but Mishurova was on a mission, securing a semi-final place.

Mishurova then got past Ukraine’s Olena Fedota to face Belarus’ Alesia Makrytskaya in the final.

The 25-year-old Russian dispatched her opponent with a score of 15-6 to secure her first European gold.