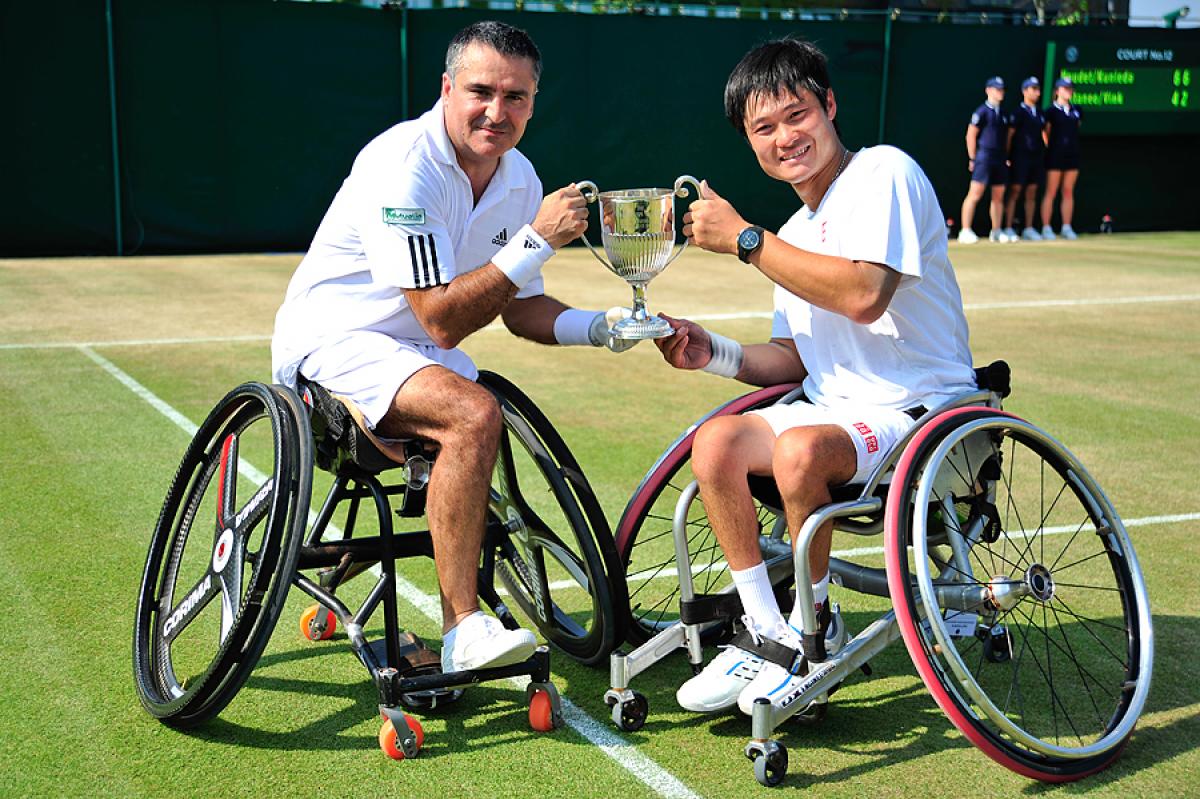 Less than a month after winning the doubles title at Roland Garros, France's Stephane Houdet and Japan's Shingo Kunieda paired up once again to take the Wimbeldon doubles crown.

“After finishing runners-up in 2010 we are very happy to win our first Wimbledon title and for me it my second, so I am very happy.”

France’s Stephane Houdet and Japan’s Shingo Kunieda won their first men’s title together at the third Grand Slam of the year, while Dutch duo Jiske Griffioen and Aniek van Koot retained their women’s title as the Wimbledon wheelchair tennis doubles event drew to a close on Sunday (7 July) in London, Great Britain.

Top seeds Houdet and Kunieda clinched a hard-fought 6-4, 6-2 victory in the men’s final after trailing second seeds Frederic Cattaneo of France and Ronald Vink of Netherlands 2-0 early in the first set.

Houdet and Kunieda soon recovered the break and Cattaneo and Vink repelled two break points against them in the fifth game and then had a break point of their own in the next, only for both partnerships to remain level after the first six games of the match.

Houdet and Kunieda, last month’s Roland Garros champions, held to love as the two sets of finalists continued to split the games at 4-4, but Houdet’s huge forehand proved decisive in the ninth game as to move them ahead 5-4.

The French-Japanese partnership went on to earn themselves a set point in the next game and Houdet’s forehand again provided the breakthrough as he fired another forehand down the middle between Cattaneo and Vink to clinch the opening set after 41 minutes of play.

Houdet and Kunieda sealed their fourth game in a row to take a 1-0 lead in the second set before Cattaneo and Vink fought back. But Houdet’s forehand again found its mark as he and Kunieda, the 2010 runners-up at Wimbledon, opened up a clear advantage at 4-2 and went on to take the set and match.

“We were very solid today. I just played steady all the way through and Stephane was hitting some great shots,” Kunieda said.

“After finishing runners-up in 2010 we are very happy to win our first Wimbledon title and for me it my second, so I am very happy.”

In the women’s final van Koot and Girffioen paired up to sneak away with a 6-4, 7-6 (6) victory in a thrilling match against Great Britain’s Jordanne Whiley and Japan’s Yui Kamiji, producing some tremendously exciting tennis.

The crucial breakthrough came in the ninth game as van Koot’s third service game of the match brought three game points, with Whiley netting a backhand to give the Dutch defending champions the lead for the first time at 5-4. It was left to Whiley to try and serve to keep herself and Kamiji in the set, but they found themselves three set points down, with Whiley serving a double fault on the second set point.

Griffioen suggested a change in the pattern of the game as she hit an ace in the opening game of the second set, but after a double fault on game point, Kamiji and Whiley gained started with a break, just as they had done in the first.

Kamiji and Whiley held two successive points for a service hold in the sixth game of the set, but even a third opportunity slipped away as the more experienced pairing of Griffioen and van Koot kept up the pressure and the exchange of games continued.

At 4-4 Griffioen and van Koot had two points to hold serve and, as in the opening set, they finally clinched the ninth game to seize the advantage.

However, the set was not to be a replica of the first and after Griffioen had held serve for the first time Kamiji and Whiley secured their first hold of the match before having two set points at 6-5 Successive errors from Whiley and then Kamiji saw both set points disappear and van Koot finally forced a tiebreak after firing a forehand winner down the centre of the court between her stranded opponents.

“Obviously we are delighted to retain our Wimbledon title,” Griffioen said. “It was a hot day and the sun was out, but I don’t think that was an excuse. None of us served too well and it wasn’t our best tennis. However, for us, it was good to play new opponents. It took us a while to see how they played and they were good, but we are very happy to have won a tough match.”