Victorious Wollmert shows class on and off table 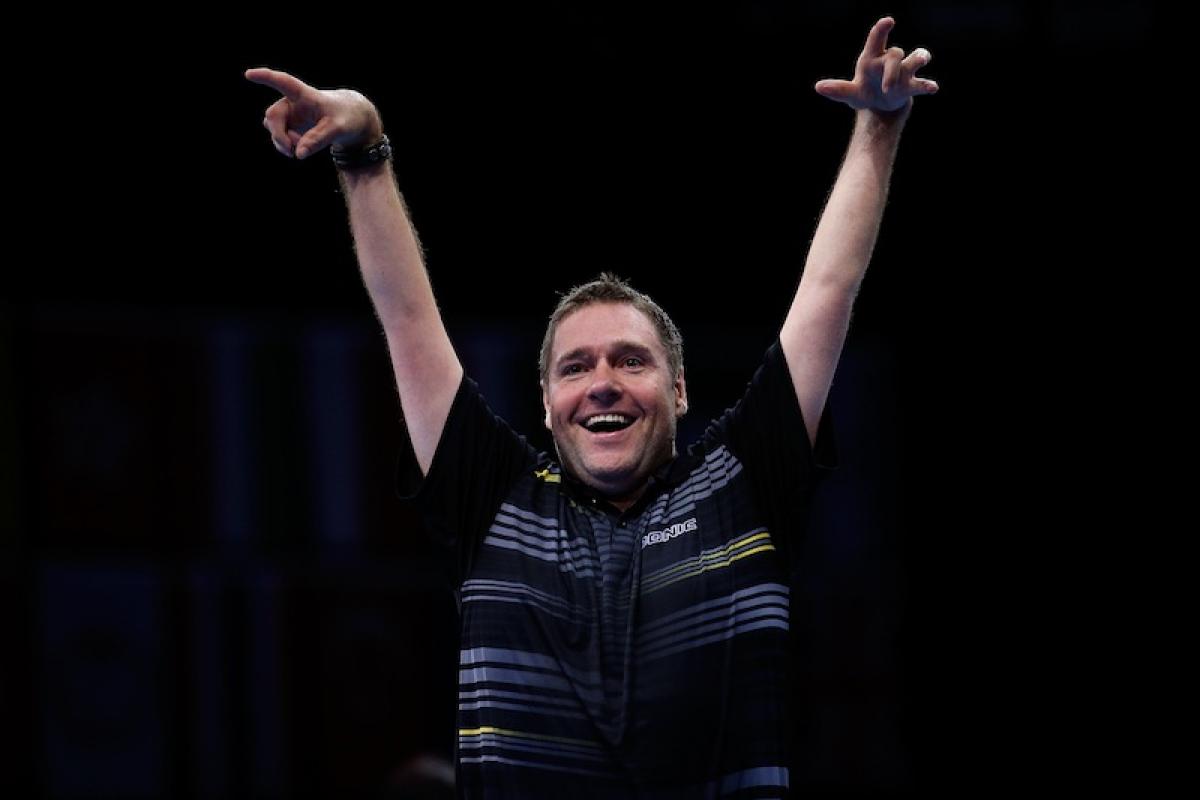 "My dream was to make the final, against the local matador, Will."

It was one of the defining images of the London 2012 Paralympic Games so far. German Jochen Wollmert, having beaten home favourite Will Bayley in four sets, comforted his defeated opponent as he slumped to the floor in tears at the end of their gold medal match.

The vastly experienced Wollmert had shown his class on the table in powering to a 3-1 (11-8, 4-11, 11-5, 11-4) victory and his third Paralympic gold, before displaying it off it as well, consoling the younger Bayley.

It earned a rapturous reception from a capacity ExCeL crowd, who rose to their feet to applaud both finalists after a fascinating class 7 final.

Wollmert, who won his first Paralympic medal at Barcelona 1992, was in control for the vast majority of the match, aside from a second set in which Bayley won six straight points.

It was not the fairytale ending that Bayley had hoped for, but in Wollmert, he encountered a player writing his name into the Paralympic history books.

“It's always emotional in front of a home public because they celebrate Will, he plays with the public, with fist pumps and fights every point,” Wollmert said.

“But that also made Will a bit nervous. He needs the public, but I noticed it made him nervous too.

“The last time I won against him was in Beijing and since Bejing I have lost against him five or six times.

"It was a big game, and a fantastic crowd. I got silver in 1996 in Atlanta, gold in Sydney, silver in Athens and gold in Beijing, so really it should have been silver in London.

“But I got the gold and that was fantastic. My dream was to make the final, against the local matador, Will.”

For Bayley, the sense of disappointment lingered after the match.

“I made the final and I thought I had a really good chance of winning,” he said. “I'm sorry for the people who have come to watch, I'm sorry for my coach because I don't think I played as well as I can play. I'm just disappointed.

“To be honest, I maybe felt a bit of pressure coming into today. I was expecting to win really, I haven’t lost to him in the last 10 times.

“He played brilliant, I have to hold my hands up and say today he was too good. I have to be a gracious loser, continue on and try to beat him in Rio.”

The player had entered to ExCeL arena to a deafening roar, with the vast majority of the support for home favourite Bayley.

But the clinical Wollmert began to quieten them after winning a tight opening set 11-8.

The second looked to be developing into a similarly close contest when Wollmert leveled the scores at 5-5, only for the point to be taken away and ordered to be replayed. Bayley took full advantage, winning the next six points to level the match overall.

The was as good as it got for the world number two however, as Wollmert recovered his composure superbly. He lost just nine points in the final two sets, displaying brilliant technique in the process.

It was too much for an emotional Bayley, who slumped to the floor at the end, before Wollmert, having briefly celebrated with his coach, stepped in.

It further won the hearts of the London crowd, providing an unforgettable culmination to Wollmert’s third gold medal triumph.