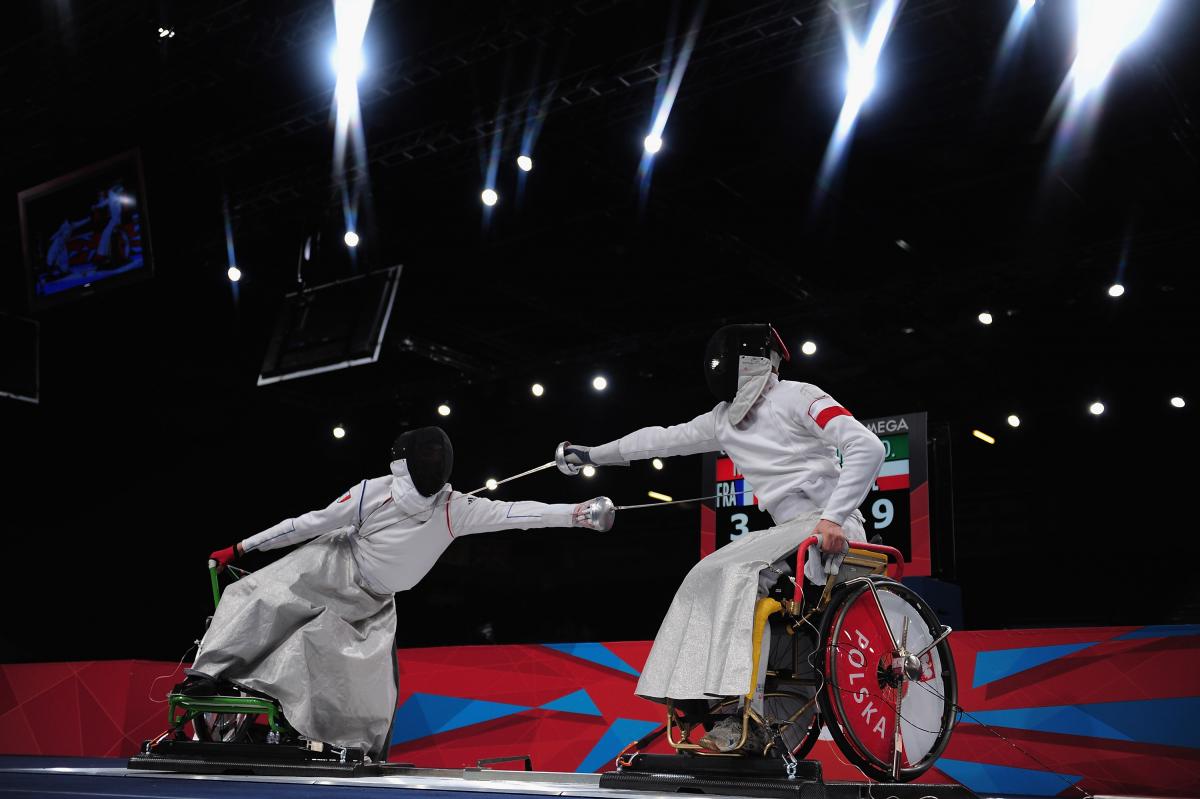 Dariusz Pender of Poland fences during his Gold Medal match against Romain Noble of France on day 7 of the London 2012 Paralympic Games.

The world’s best wheelchair fencers will head to Warsaw, Poland, this week (9-12 July) for the IWAS Wheelchair Fencing World Cup, with Polish athletes looking forward to competing on home soil.

According to Poland's Adrian Castro, World No.1 in the category B sabre discipline, training ahead of the event is intense.

"I am training six times a week," Castro explained, "I want to be really well prepared. I'm very focused on this tournament."

For his teammate Marta Makowska, who won bronze in the category B foil event at London 2012, even this extensive preparation feels insufficient.

"I never feel prepared enough," Makowska said, "I know I should practice more and more, because my competitors are very strong. This year athletes from 30 countries will come to Warsaw and the level of competition is very high."

Despite the demanding training regime, both athletes can agree that they are looking forward to competing in their home country.

"I love to compete in my own country," Makowska enthused, "the biggest advantage is that my daughter and husband will be there. For me it is very important to feel their support, they are big motivation for me."

Castro is also looking forward to having home support when he competes, but admits that this adds pressure too: "Of course it is a big advantage that my friends and family will come to support me, but I don't want to let them down – that is why there will also be little bit more pressure, though it's very nice to feel their support."

Castro is looking for a second consecutive World Cup victory following his win at May’s IWAS World Cup in Pisa, Italy. For Makowska, the tournament is a chance to get her season back on track after some disappointing results.

"This year was not very successful for me," Makowska admitted. "My wish for Warsaw is to be in a final. I know it will be very hard because talented fencers from China are coming, but I will try to do my best."

Ahead of the World Cup in Warsaw both athletes are conscious that with September’s World Championships in Eger, Hungary, fast approaching, there are few opportunities left to gain precious qualification points for Rio 2016.

"First I'm concentrating on the World Cup," Castro explained. "I hope a good result will give me a strong position in the rankings.

"But I am also very focused on the World Championships. Before the event we have a two-week fencing camp in Poland and I will be practicing every day.

"Every competition before Rio 2016 brings us closer to the goal – that is why it is so important to have the best results. There is no time for mistakes. One lost match takes us one step back."

According to Makowska, qualifying for the Paralympic Games is tougher than ever:

"I have already attended three Paralympic Games in Sydney, Athens and London, but there was never such big pressure as it was a little easier to qualify. Now it's harder because there are fewer places, so only the best fencers qualify for the Games."

If there is anything that will help Poland's stars make it to Rio 2016, it is the palpable team spirit in the squad, as Makowska outlined: "The other members of the squad are not only my teammates but my good friends.

Together with our coaches and physiotherapists we are like family. I really enjoy being part of this wonderful team."

Castro, too, is quick to point out that the support network within the Polish camp is strong. "The team is like my second family," he explained. "Sometimes we compete. but we are always supporting each other, like musketeers. It's one for all and all for one. I wish all my friends success."