The wheelchair fencing tournament will feature Paralympic and world champions going for the gold and twelve medal events in the five days of competition. 03 Sep 2012

Zsuzsanna Krajnyak is currently the top-ranked female in foil and epee, so will be hard to beat in her quest for her first Paralympic medal.

For fast action and high drama, spectators with access to the ExCel are encouraged to cast their eyes on wheelchair fencing.

Hungarian Pal Szekeres is the only person to have ever medalled in both the Olympic and Paralympic Games. The 47-years-old is a three-time gold and three-time Paralympic bronze medallist.

Szekeres journey to the top started back in 1988, when he won bronze at the Olympic Games in Seoul as a professional fencer in the Team Foil event, before being injured in an accident in 1991.

China’s world champion Tian Jian Quan will want to hold onto his Beijing gold medal, with France’s Romanin Noble and Poland’s Darkusz Pender also top contenders in the men’s Epee A. World champion Chung Ting Ching of Hong Kong and France’s Valet are ones to watch for in the men’s B event.

Zsuzsanna Krajnyak will be aiming for success for Hungary in London. She is currently the top-ranked female in foil and epee, so will be hard to beat in her quest for her first Paralympic medal. Chan Yui Chong of Hong Kong is likely to be her strongest competition. She will compete in the women’s Epee, Foil and Team events. Yu Chui Yee, also from Hong Kong, will want to better her silver medal from Beijing.

“Although this is my third time at the Paralympic Games, I still feel quite nervous,” Chong said. “My primary focus is mainly on following my coach’s instruction and trying my best to achieve a good result.”

Chong won gold at Beijing 2008 in the Foil B and Epee B. In the Epee B event, her toughest competition will come from world champion Saysune Jana of Thailand, Poland’s Maria Markowska and Hungary’s Gyongy Dani.

In the men’s Foil A competition, world champion and Beijing gold-medallist Ye Ru Yi of China will face his toughest threat in Italy’s Matteo Betti in the men’s event.

In the men’s team events, France and Italy should not be overlooked as Hong Kong and China are likely to fight it out for the top spot on the final day of the wheelchair fencing competition. 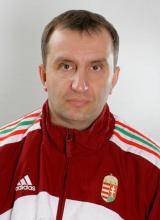 Zsuzsanna Krajnyak reacts as she fights against Hong Kong's Fan Sui Shan at the Beijing 2008 Paralympics.