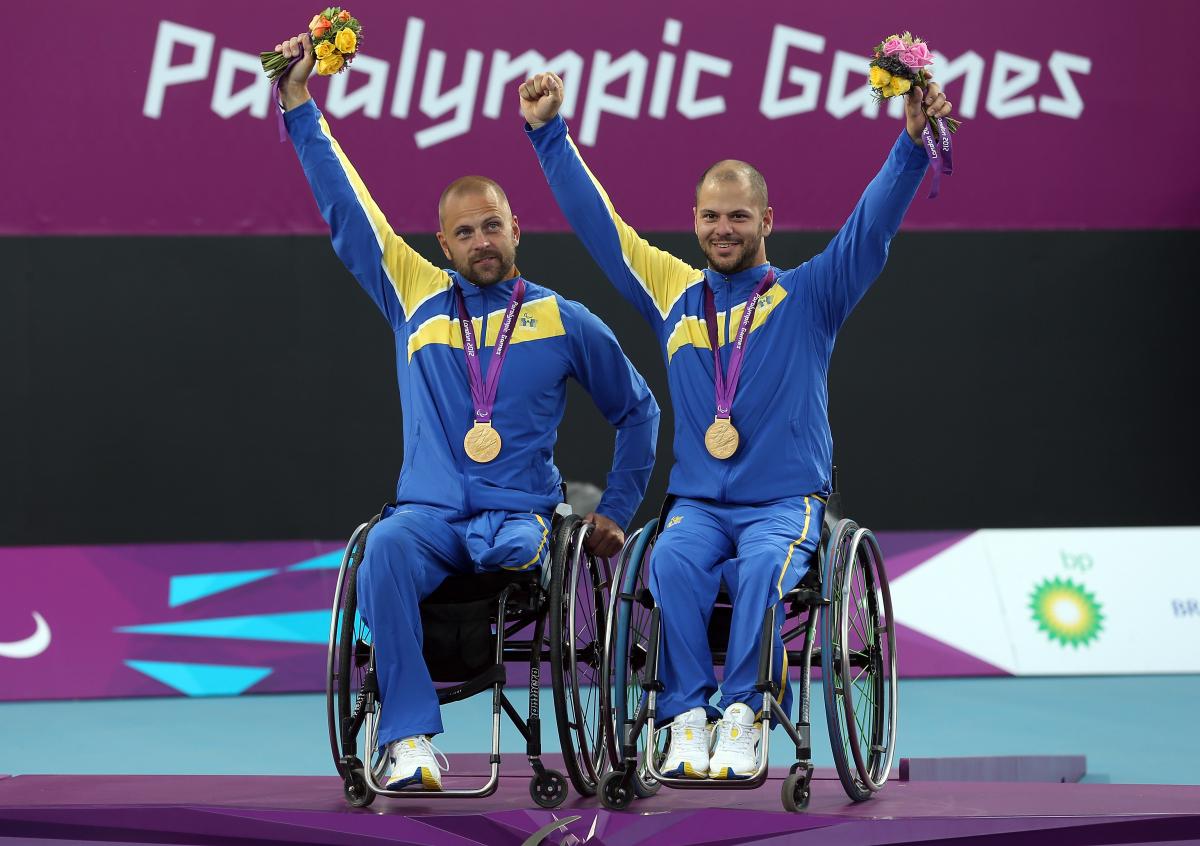 Stefan Olsson and Peter Vikstrom of Sweden celebrate with their gold medals after the men's doubles final at London 2012.

"It's the pep talk every point that we support each other with to keep up the adrenaline."

Vergeer beat her Netherlands countrywoman Aniek van Koot 6-0, 6-3 in the final and said it was a huge personal triumph for her.

"Everybody expected me to win gold and that I would win but I still had to work hard, to go to training, to be at the top of my game. A lot of people forget that," she said.

"It's what I dreamt about, thought about and did everything for,” she said.

Van Koot said that she is thrilled with a silver medal.

“I never could’ve dreamed of a final,” she said.

“Obviously you do in the back of your head because you’re world number two but still I was like ‘oh I’m not going to keep my nerves down when I’m there’, but I did.”

In the men’s doubles final, Olsson and Vikstrom were able to go one better at London 2012, winning a gold medal to go with the silver they won at the Beijing 2008 Paralympic Games.

Vikstrom said the win was unbelievable.

"I was not expecting this, we just went out there and played point by point," he said.

He paid tribute to his Olsson and said they had some celebrating to do.

"It's the pep talk every point that we support each other with to keep up the adrenaline,” Vikstrom said. “We know each other and we have been playing together for a long time.”

The world No. 1 doubles team of Houdet and Jeremiasz put the disappointment of not being in the gold-medal match behind them, winning the bronze medal 6-0, 6-0 against Netherlands’ Robin Ammerlaan and Ronald Vink.

Robin Ammerlaan has now won two gold medals, a silver medal and a bronze medal in four Paralympic Games. He said after the match that he was hanging up his racquet.

"It was a good match to retire on, getting beaten 6-0, 6-0. I think after that I should definitely stop," he said.

Taylor said the result was a very special one for him.

“It's taken me since 2004 to get a medal in the singles. I am so excited, I do know how to describe this feeling. I've come so close both times and to finally get it here is huge for me."

The Wheelchair Tennis competition is scheduled to commence on Day 10 of the London 2012 Paralympic Games at 12:00 at Eton Manor.