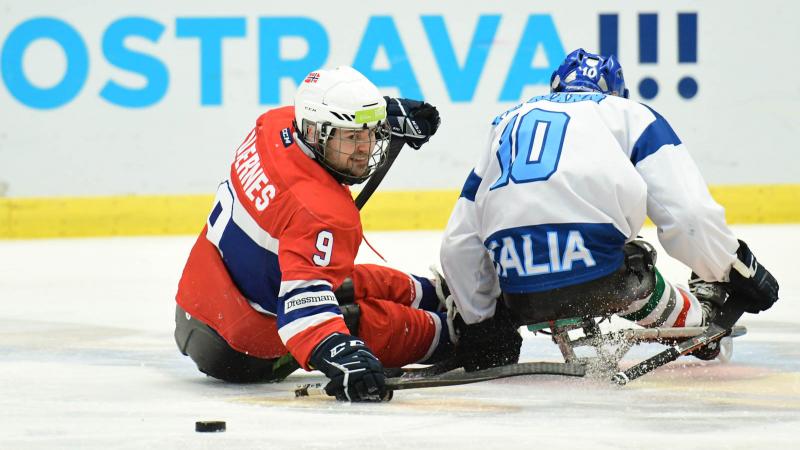 The World Para Ice Hockey A-Pool Championships will return to Ostrava, Czech Republic from 19-26 June 2021, as the top eight-ranked teams compete for a world title and qualification slots for the Beijing 2022 Paralympic Winter Games.

Ostravar Arena will host the event for the second consecutive time and third time overall after staging the most successful tournament to date in 2019, drawing a record-breaking 64,748 spectators and unprecedented media and broadcast coverage around the world. The city also held the World Championships in 2009.

The top five finishers at the 2021 World Championships will automatically qualify for the Beijing 2022 Winter Paralympics; the last three finishers will take part in a qualification tournament to be held at a later date to try to earn their spots in Beijing.

The Ostravar Arena was formerly known as the Culture and Sports Palace and was first opened in 1986. It has hosted many national, European and world championships, as well as concerts and other popular events.

The Arena was modernised in 2003 and is home to the HC Vitkovice Steel ice hockey team.

Ostrava is the third largest city in the Czech Republic and has over 300,000 inhabitants. At the same time, it is also the capital of the Moravian-Silesian Region. Originally the steel heart of the republic, it has become the centre of sport and culture in recent years.

In 2014, Ostrava was the European City of Sport and one of the world's most prestigious contests have been held there repeatedly. High quality sporting facilities include the multifunctional City Stadium in Ostrava and the Ostravar Arena.

Ostrava also has a rich cultural background. The Moravian-Silesian National Theatre and the internationally acclaimed Janacek Philharmonic Orchestra in Ostrava are located directly in the city.

Thousands of people have also enjoyed the area of Dolni Vitkovice with the Big and Small World of Technology or the Bolt Tower.

One of the most famous festivals is without a doubt Colours from Ostrava. The Landek Park Authentic Mining Museum, Trojhali Karolina or the Stodolni Street which is full of restaurants, bars and clubs are also worth visiting.

Ostrava is also a great starting point for tourists who love hills and romantic views. The Beskids are about 30 kilometres away. To the northwest of Ostrava are the no less beautiful Jeseniky Mountains.

High quality access to the city is provided not only by the railway (connection from Prague, further to Slovakia, Poland), but also to the D1 backbone motorway or the nearby airport of Leos Janacek in Mosnov.