IPC Announces All-Women Shortlist for Athlete of the Month

The International Paralympic Committee (IPC) has announced its shortlist for February’s Athlete of the Month award, and the public can now voice its opinion for the winner via a poll on the homepage of the IPC’s recently launched new-look website, www.paralympic.org.

This month’s shortlist is made up entirely of women in honour of International Women’s Day on 8 March.

The public has until 23:59 (CET) on 7 March 2012 to vote for whom they think had the best performance last month on the para-sport scene.

The finalists for March include:

Sarah Storey (Great, Britain): Storey cruised to gold in the 3km Pursuit C5 and 500m Time Trial C5 and a silver in the Mixed Team Sprint at the Para-Cycling Track World Championships in Los Angeles, USA.

Grace Ebere Anozie (Nigeria): Took gold at the final London 2012 Powerlifting qualification event in the women’s over 82.5kg with a lift of 168kg, which would be a new world record if ratified by the IPC.

Thailand’s Women’s Wheelchair Tennis Team: The trio of Ratana Techamaneewat, Sakhorn Khanthasit and Chusri Inthanin qualified for the BNP Paribas World Cup this year with a top performance in the Asia/Oceania region. 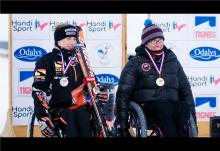 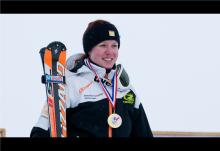 Germany's Andrea Rothfuss picked up a gold and silver in the Downhill Standing at the IPC Alpine Skiing Europa Cup in Tignes, France.