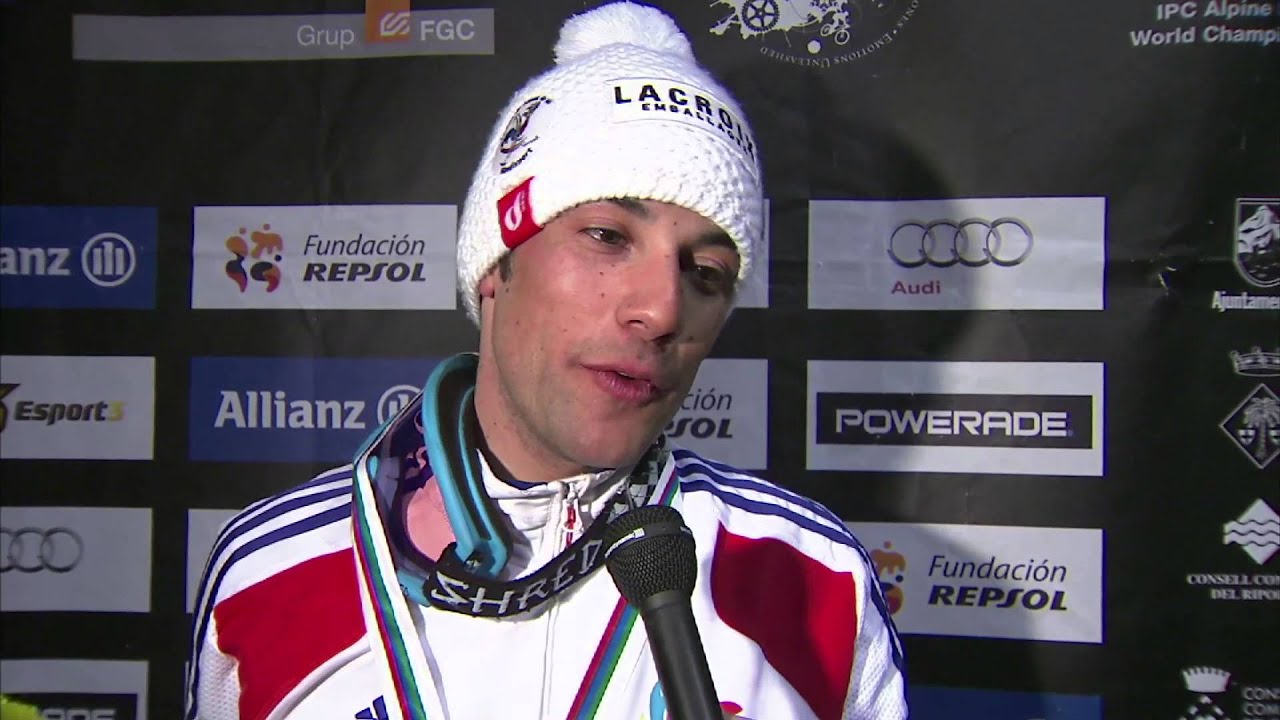 France's Marie Bochet joined an elite group of athletes to win five individual world titles in one event on Tuesday (26 February) with victory in the giant slalom standing class at the 2013 IPC Alpine Skiing World Championships in La Molina, Spain. The 19 year defending champion led from start to finish in a time of 2:21.61 to stand top of the podium once again. In a repeat of Monday's podium finish Germany's Andrea Rothfuss (2:21.61) picked up her fourth silver medal in La Molina whilst 18 year old Canadian Alexandra Starker also won her third bronze (2:28.26). Speaking to www.paralympic.org shortly after crossing the finishing line, an emotional Marie Bochet said: "It feels incredible, just crazy. I am lost for words. I am so happy to win all five medals. "I think this achievement will only sink in once I have all five gold medals around my neck, it's so amazing. "I was confident going into this event as I was defending champion, but to win five from five, I can't quite believe it." Bochet was not the only skier to retain her giant slalom world title on Tuesday, so did three other skiers. The men's visually impaired was a close run race with just 0.63 seconds separating the top four after the first run. After finishing second after their first run, Jon Santacana and his guide Miguel Galindo Garces put in a great second run to take their third gold of the Championships, after victories in the downhill and super-G. The Spanish duo's time of 2:12.32 ensured they retained their title world title from Sestriere, Italy, two years ago, and placed them ahead of the Canadian duo of Mac Marcoux (guide BJ Marcoux) and Chris Williamson (guide Robin Femy) in silver and bronze medal position respectively. The Marcoux brothers (2:13.59) had led after the first run, whilst yesterday's super combined winners Williamson and Remy (2:13:87) maintained their third position. France's slalom world champion from Sunday, Vincent Gauthier-Manuel recovered from the disappointment of not medalling in Monday's super combined to retain his world title in the giant slalom standing class. The 26 year old led home the field in 2:09.02 to take his second gold of the Championships. A second silver in as many days went to Russia's 15 year old Alexey Bugaev (2:9.61), whilst bronze went to Switzerland's Michael Bruegger (2:11.50) who won downhill silver and super-G bronze last week. It was also another outstanding day for Japan's Taiki Morri who picked up his third world title of the Championships in the men's sitting class. The 33 year old who had already won gold in super-G and super combined, as well as slalom silver, stormed to victory in 2:15.80 to retain his world title. In a repeat of the podium at the 2011 World Championships, Morri's teammate Takeshi Suzuki took silver (2:20.12) whilst bronze was won by Switzerland's Christoph Kunz (2:20.26). Russia's Alexandra Frantseva and guide Pavel Zabotin picked up the first gold of the day in the women's visually impaired class. It was Frantseva and Zabotin's third gold of the Championships, after success in the super combined and super-G events. The duo finished in 2:27.57, ahead of the Canadian duo of Viviane Forest and Chloe Lauzon-Gauthier (2:27.81) who added silver to the bronze they won in the Sunday's slalom. The British pair of Kelly Gallagher and Charlotte Evans (2:29.07) won their second bronze of the Championships adding to the two silvers they had already won in super-G and super combined. Austria's Claudia Loesch won her third gold in La Molina thanks to an impressive second run in the women's sitting class. After the first run Loesch, who now has world titles in super-G and super combined, was second, almost two seconds behind Germany's defending champion Anna Schaffelhuber. Her second run was extremely fast however, and her final time of 2:29.70 ensured she finished almost a second and a half ahead of Schaffelhuber who had to settle for silver (2:31.23). Bronze went to Canada's Kimberly Joines (2:38.40) After the final day of individual competition and 30 medal events, France lead the medals table with 12 medals made up of seven gold, two silver and three bronze. The 2013 IPC Alpine Skiing World Championships in La Molina, Spain will close on Wednesday with the team event. Nearly 120 skiers from 28 are competing in the event which is the last major international Championships ahead of the Sochi 2014 Paralympic Winter Games. For more information on the event including live results, please visit: www.ipcalpineskiingworlds.org. Follow the action on Twitter @IPCAlpine and like the Facebook page Facebook.com/IPCAlpineSkiing.