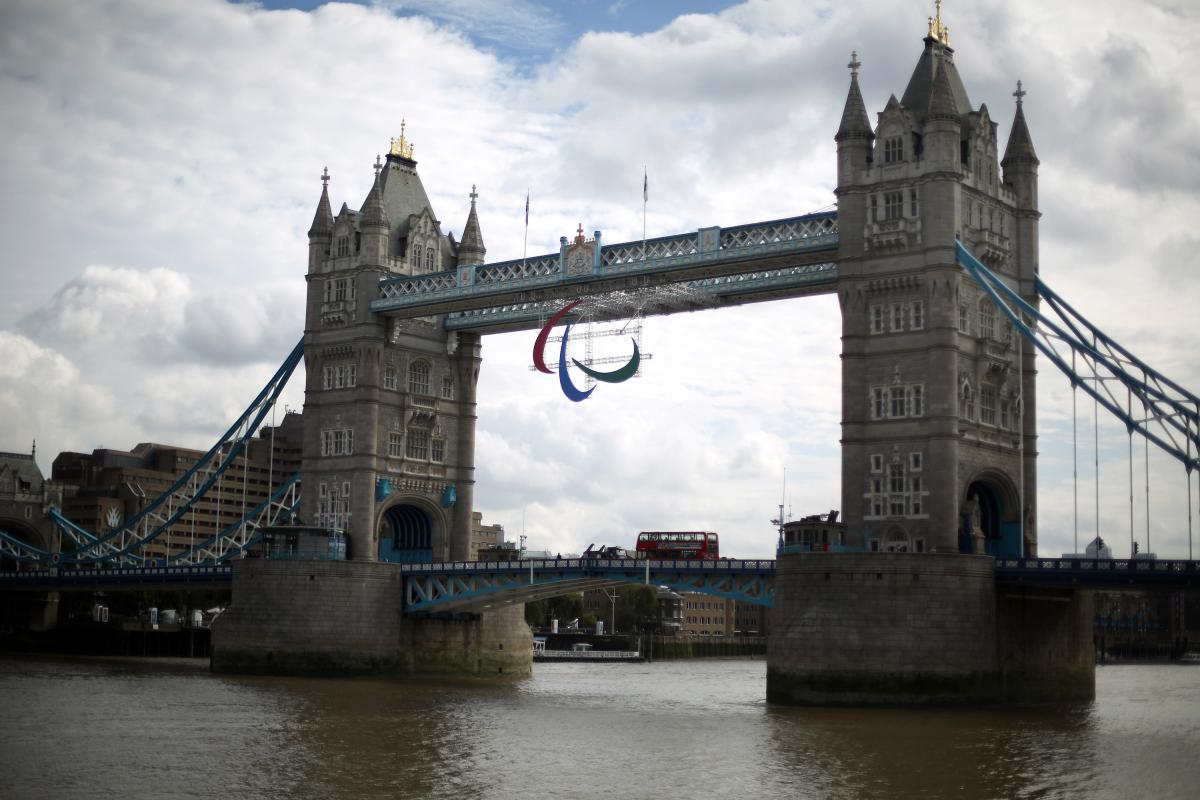 The Paralympic Agitos were unveiled on the Tower Bridge in London five days prior to the Opening Ceremony.

"What the athletes did more than anything was change the world’s attitudes and perception towards people with an impairment and showed everyone that Paralympic sport is elite sport involving the world’s best athletes."

Whether it was Channel 4’s multi-award winning “Superhumans” TV commercial, Samsung’s “Sport Doesn’t Care” YouTube video or seeing a 25 metre high image of Ellie Simmonds on the side of the Westfield Shopping Centre walking into the park each day, London 2012 showed that Paralympians could star in TV commercials and feature on billboards in their own right. All London 2012 sponsors should take a bow for their superb support of the Games and its athletes, especially those who have continued their support since.

A total of 4,237 athletes from 164 countries took part in the Games and every single one of them deserved a medal. A total of 251 world records were broken and medals were won in 503 medal events. However what the athletes did more than anything was change the world’s attitudes and perception towards people with an impairment and showed everyone that Paralympic sport is elite sport involving the world’s best athletes.

Immense! You could not miss them – 20,000 of them proud to wear the now world famous uniform. You really did make the Games for everyone involved. I will always remember doing BBC Radio 5 Live breakfast on the final morning outside the Olympic Stadium and hearing a group of Games Makers doing the “Hokey Cokey” at around 6:30am as they prepared for their last day. Still brings a tear to my eye to this day

First impressions last and for many visitors to the Games their first experience of London 2012 was a security check by the British Armed Forces. Recruited at the last minute the soldiers did their country proud, always welcoming guests with a huge smile and often with some very amusing British humour.

There was no greater sight than seeing Paralympians front and back page of every British newspaper during the Games, as well as many pages in between. The tone of the coverage also changed from focussing on athletes’ back stories to talking about their mesmerising performances.

TV pictures were beamed to over 115 countries whilst thousands of media spread the stories to every corner of the globe.

Whether it was Jody Cundy turning the air blue in the Velodrome after disqualification or ‘Blade-gate’ following Alan Oliveira’s 200m T43/44 success, such issues showed just how much it meant for athletes to win Paralympic gold. Elite sport has regular helpings of controversy and London 2012 had its fair share.

A total of 2.78 million spectators packed the venues each day and made for the most amazing atmospheres. To see 80,000 people in the Olympic Stadium by 9:00am sat in their seats eagerly awaiting the morning session of athletics was a sight to behold. The spectators at London 2012 set a benchmark for how crowds at sporting events should be – passionate, loud, supportive and most of all respectful.

When was the last time you were at a sporting event when the entire crowd chanted the name of just one athlete or player? Few will forget the night Jonnie Peacock acted like a matador to silence 80,000 people, and few should forget what an amazing race it was. The tension was unbearable and looking ahead to Rio 2016, this was the night the now much talked about “Peacock v Browne” rivalry was born.

The “Festival of Flame” that brought London 2012 to an end was very nearly extinguished by all our tears distraught that the best Games ever were coming to a close. Very few would have ever predicted that the likes of Coldplay, Rihanna and Jay-Z would all perform on one stage at a Paralympic Closing Ceremony, but after the amazing 10 days we had all experienced, where every single expectation had been exceeded, nothing was a surprise anymore.

The British capital could not have done more to make everybody feel welcome. Everyone was friendly, landmarks such as Tower Bridge and Trafalgar Square were Paralympic branded, and any fears of transport problems were soon put to rest with smooth running tubes and free flowing roads. LOCOG also deserve huge credit. They well and truly got behind the Games and delivered something truly special that all of us involved will remember for the rest of our lives.

By far the best 10 days of my life! An amazing experience, thank you London 2012.