No 10. Japan’s year to remember in wheelchair tennis

Kunieda and Kamiji finished the year as World No. 1’s in the men’s and women’s singles but also enjoyed great success in the doubles too. 22 Dec 2014
Imagen 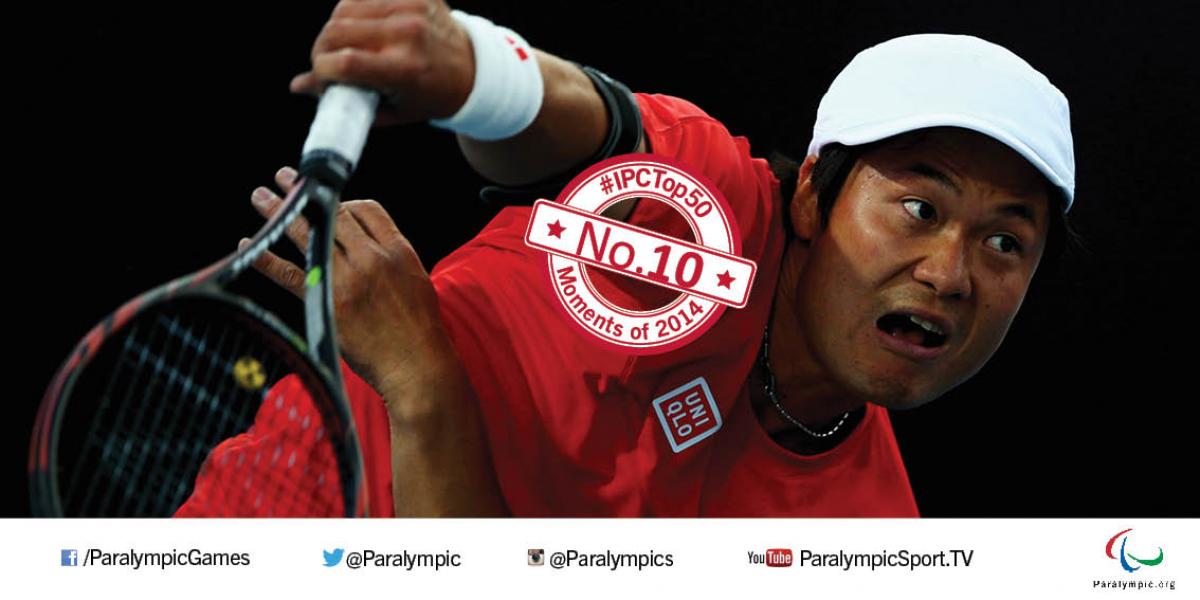 It is hard to believe 2014 could have gone any better for wheelchair tennis in Japan.

Not only did Japanese players top the world rankings in both the men’s and women’s games, but Japanese clothing company UNIQLO signed a deal to become a long-term supporter of the sport.

Leading the way for Japan in wheelchair tennis in 2014 has been 30-year-old Shingo Kunieda, who arguably enjoyed his best season to date, winning 51 matches and losing just one.

January’s shock loss to Great Britain’s Gordon Reid may have cost him the Sydney International Wheelchair Tennis Open in Australia, but the London 2012 Paralympic champion still managed to win 12 other tournaments in a year to remember.

Less than five months later, he claimed his second Grand Slam title of the year with victory over Stephane Houdet at Roland Garros. Unlike in Melbourne, he did not have it all his own way and was involved in an epic semi-final thriller with Fernandez that went to three sets.

Fernandez was again Kunieda’s final opponent at September’s US Open in Flushing Meadow, but the Japanese player was too strong and went on to secure his first ever US Open title.

Victory at the end of season NEC Masters in London, Great Britain, saw Kunieda finish as World No.1 for a sixth time.

Having gone 48 games undefeated, the question now is whether Kunieda can continue his winning ways and get somewhere close to Esther Vergreer’s unbelievable record of 470 consecutive wins.

Since Vergeer’s retirement at the end of 2012, the women’s game has been in transition with various players holding the top spot.

That is until however the emergence of Yui Kamiji who, in 2014, made the final of all three Grand Slam singles events, winning two of them.

World No.1 since May, Kamiji finished as runner-up to Germany’s Sabine Ellerbrock at the Australian Open, won her first singles Grand Slam at Roland Garros with victory over the Netherlands’ Aniek Van Koot, and topped off her year with success at the US Open.

“Last year I lost the semi-final and I was not happy about my performance,” the 20-year-old said. “I really wanted to win the US Open. Last year I focussed on defence so this year I decided to be more aggressive.”

So after the Dutch dominated wheelchair tennis for so many years, does Kamiji believe it is now the Japanese’s turn?

“Shingo Kunieda has been leading men's wheelchair tennis and now I reached No.1. If I can keep winning the matches and win Grand Slam titles, I'm sure that it will be the period of dominance of Japanese wheelchair tennis,” she said.

Japan’s success has not just been limited to just the singles game.

With partner Stephane Houdet, Kunieda won Grand Slam doubles titles at the Australian Open, Wimbledon and US Open to finish the year as the world No.2 behind his French accomplice.

Kamiji though did even better.

She finished the year as the World No.1 after becoming the first non-Dutch woman, together with Great Britain’s Jordanne Whiley, to complete a calendar year Grand Slam of doubles titles.

In June, the ITF signed a three year partnership agreement with UNIQLO to become title sponsors for a number of the governing body’s flagship wheelchair tennis properties.

"It is great news for wheelchair tennis that a high profile global brand like UNIQLO has become the title sponsor of the Wheelchair Tennis Tour," said ITF President Francesco Ricci Bitti.

"We have been impressed with UNIQLO's enthusiasm, creativity and vision, and we believe that they will be an outstanding partner for both the ITF and wheelchair tennis, one of the fastest growing Paralympic sports.”

"We welcome their involvement and look forward to working with UNIQLO over the next three years."