After winning the Games in September 2013, Tokyo 2020 has progressed at great speed and with great enthusiam. 16 Dec 2014
Imagen 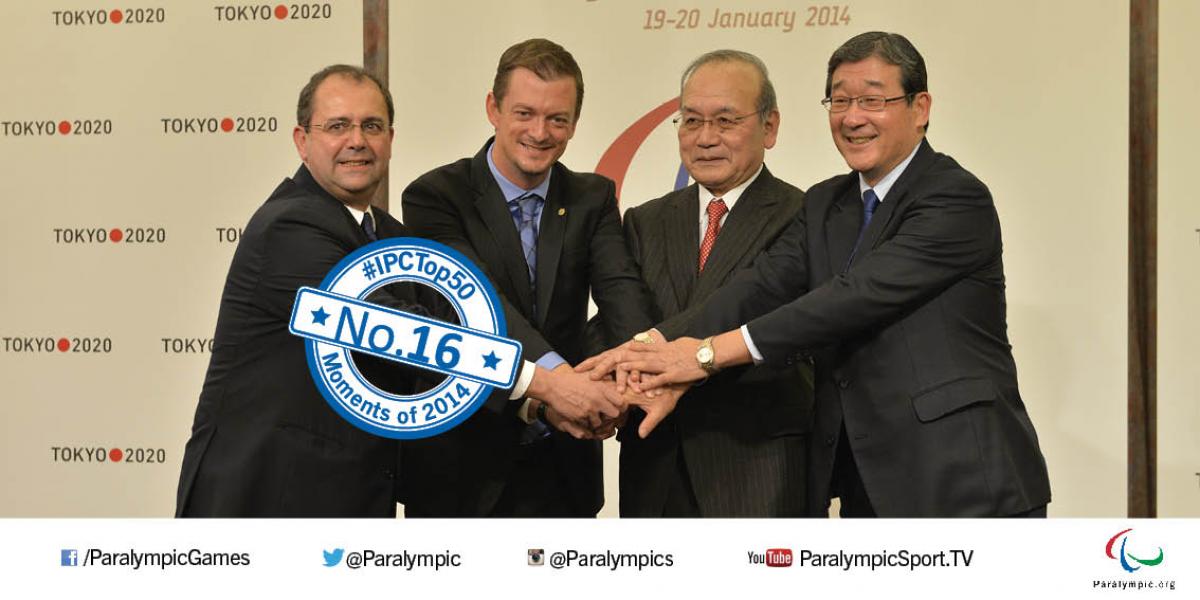 I hope that Tokyo 2020 will leave a legacy of great achievement in the history of the Paralympics and that through these Games, the value of sport will be shared throughout the world.

On 7 September 2013 Tokyo, Japan, won the right to host the 2020 Olympic and Paralympic Games. Since then, the Organising Committee has progressed at great speed and with great enthusiasm. In October 2014 the IPC decided on the first 16 sports that will be included in six years’ time and a month later the IPC and Tokyo 2020 jointly celebrated 50 years since the Tokyo 1964 Paralympics.

In January 2014, the International Paralympic Committee (IPC) delivered an orientation seminar to 220 members of the Organising Committee and other stakeholders.

During two days, the IPC gave as much background information as possible on delivering the Paralympic Games and Mitsunori Torihara, President of the Japanese Paralympic Committee, outlined his commitment to the Games.

Torihara said: "Throughout our preparations we will exert our utmost efforts to further raise awareness of the Paralympics in Japan and to ensure that Tokyo delivers a Games that will serve as a platform to showcase and reinforce the Paralympic values of determination, inspiration, courage and equality.”

In a video message for the IPC’s 25th anniversary, Japan’s Prime Minister Shinzo Abe also set out his high expectations.

“I hope that Tokyo 2020 will leave a legacy of great achievement in the history of the Paralympics and that through these Games, the value of sport will be shared throughout the world. Japan, together with the IPC and the Paralympic family will give its all to ensure a successful and highly enjoyable Games.”

In Berlin, Germany, in October, the IPC Governing Board announced the first 16 sports on the programme of the Tokyo 2020 Paralympics. It included para-badminton which will make its Paralympic debut in six years’ time.

Para-badminton has been competed in internationally since the 1990’s, with the first World Championships taking place in Amersfoort, the Netherlands, in 1998. But it was not until 2011 that the sport was brought under the governance of the Badminton World Federation.

A total of 24 sports applied to be on the Paralympic programme. While a maximum of 23 sports can be included, the IPC has the option to reduce the number of sports if it feels necessary.

The remaining eight sports (canoe, cycling, football 5-a-side, football 7-a-side, judo, taekwondo, sailing and wheelchair fencing) have to wait for the final decision by the IPC Governing Board in late January in Abu Dhabi, UAE.

Just a month after the first vote on the sports programme, the IPC and Tokyo 2020 jointly celebrated the 50th anniversary of the Tokyo 1964 Paralympic Games.

To mark the landmark, the IPC and Tokyo 2020 published a series of articles, videos, images and infographics on the 1964 Games via paralympic.org and tokyo2020.jp which underlined the evolution of the Paralympic Movement and para-sport in general over the last half a century.

Yoshiro Mori, Tokyo 2020 President, said in a video message: “By becoming the first ever city to have hosted both Games twice, I hope that the Tokyo 2020 Paralympics will become known for further raising the profile of and enhancing Paralympic sports and sports for people with impairments around the world.”

In six years’ time at the Tokyo 2020 Paralympic Games, around 4,300 athletes from 170 countries are expected to take part in up to 23 sports which will be finalised in late January 2015.