No. 6 Australia crowned wheelchair rugby champions for the first time

After gold at London 2012, the Australian wheelchair rugby team are now world champions after success in Denmark. 26 Dec 2014
Imagen 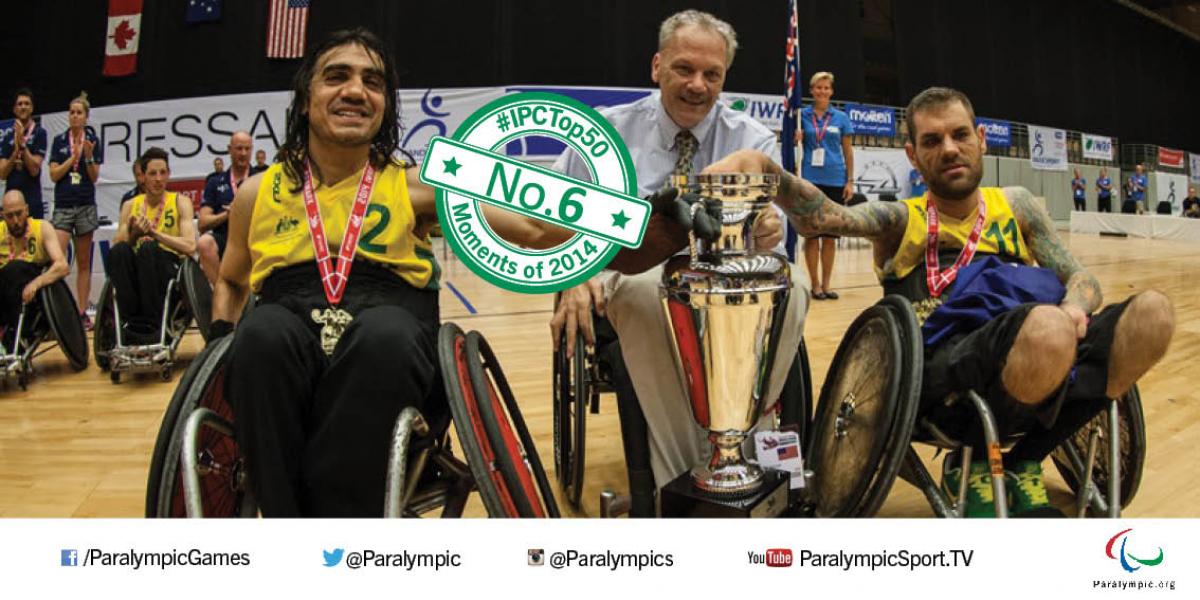 After gold at London 2012, the Australian wheelchair rugby team are now world champions after success in Denmark.

In August, Australia accomplished something they had never done before in their history of playing wheelchair rugby. They won the International Wheelchair Rugby Federation (IWRF) World Championship and an achievement that made it No.6 in the IPC Top 50 Moments of 2014.

Held in Odense, Denmark, the IWRF World Championships saw the world’s 12 best teams battle it out for ultimate supremacy.

Australia went the tournament undefeated, beating Canada in the final 67-56 to return to the top of the world rankings.

“A couple of weeks after the worlds the excitement had sunk in that you are world champions for your chosen sport and it felt amazing,” he said.

“One thing I wish we had done was celebrate more as a team but we had to get on a flight home the next day so that sort of hurt us a bit and ruined the celebrations.”

Despite a tight encounter early on, by the end of the third quarter Australia were out to an eight goal lead. Batt and the rest of the Australian team knew the game was not over however.

“You never put yourself in the position that you think you are going to win in a game,” he said.

“I think by the end of the third quarter when we were up by eight goals we felt a little more comfortable.

“Chris Bond, Ryan Scott, Naz Erdem and I had played the whole game, we were very comfortable and we weren’t making any mistakes.”

Australia was able to maintain the pressure on the Canadians to finish the game strongly and register a 67-56 win.

“The Canadians always niggle at you and come back at you so we had to be really careful,” Batt said.

“It was good to still get some other line-ups on at the end.

“Young Jayden Warn came on for us and absolutely dominated in the final quarter which was great for his confidence and our confidence as a team.

Most expected the USA to be in the final against Australia, but it was not to be.

“I would love to play the Americans in a final but I guess they weren’t at their best to be in that final.

“I’m sure will we play them in a big game in the future.”

Batt admitted that he usually has one poor game during a major tournament and was thankful that it did not come in the final.

“I like playing under pressure so I like playing better in the semi finals and the finals because that is where I peak,” he said.

“Once I get that bad game out of the way I am pretty happy and I know it is all going to be good from there, for me it was the Denmark game.”

Batt admitted that it was just one of those weeks where everything fell into place for the Australian team.

“The injuries stayed away, the whole team logistics were really good and it was overall a really good feel at worlds,” he said.

“We hadn’t had that feeling since the London Paralympic Games with that close group.

“To come into worlds, and stay off campus away from the rest of the teams, with that feel back in the team that we are all mates having fun really meant a lot for us.”

Things could be looking ominous for the rest of the wheelchair rugby world as Australia now has a lot of depth to call on in their squad.

“The whole Australian Paralympic Committee staff and the team are doing a really good job with developing both coaching wise and athlete wise,” Batt said.

“I am just looking forward to the next couple of years to see where we go.”

Between now and Rio 2016, the No.1 team will have the rest of the world hunting them down, but they will take some serious stopping.