No. 8 Vergeer shows her human side with 470th straight win

For many people, Vergeer is invincible and there’s almost an assumption that she will win. But for her it takes a lot of hard work and mental strength to withstand this pressure. 24 Dec 2012

Some people were surprised by just how emotional the wheelchair tennis player became when she won the women’s singles title in London, beating compatriot Aniek van Koot, 6-0, 6-3.

After all, it was her 470th straight win – she has not lost a singles match since 2003 – and it was her fourth Paralympic gold in the event.

People expected her to win and Vergeer often made it look so easy, that they thought it was.

“I would almost say the expectations were too high,” Vegeer sighed. “I felt a lot of pressure during the whole Paralympic Games. For the whole year I was in the mode of winning that gold medal.

“Gearing up for those Games took a lot from me – handling the pressure and expectations was quite tough on me.”

Van Koot had been growing from strength to strength. Like Vergeer, she had not lost a set in the London 2012 tournament before the final, and earlier in the year van Koot had become one of the few people to take a set off her rival.

“I knew she had the capabilities to beat me or to make it difficult and make me play hard.

“I knew that if she had a really good day and if I would play under pressure and not the best tennis that I can play, there would be a chance of not winning that gold medal, so I felt that pressure more than ever. It was mentally quite tough to deal with that.”

When Vergeer played the final ball, her face contorted with tears. The pressure that had been on her for the whole year had suddenly been released and she became more emotional than she expected she would.

“Eventually when I won, there was so much relief and then I realised how much pressure I had felt during the whole year and during that week.

“Some people take it for granted or see it as a normal thing that I win tournaments and that it’s all so easy for me.

“But I never take it for granted that I’m going to win. That’s one of the aspects that made me on top of the game and able to motivate myself every time.

“If you’re going to play your matches without emotion as if it didn’t matter, I wouldn’t see the fun of playing any more. I always see the challenge and feel the joy of competing and wining at the highest level.”

The match began with Vergeer winning the toss and deciding to receive the service.

“I knew that I was nervous and I know that when I’m nervous my serve doesn’t really roll,” she said.

Vergeer admits to feeling insecure at a couple of points during the game, when she was not sure she could win the match. In the second set, van Koot was finding a way back in, and the memories came flooding back of Beijing 2008 when Vergeer had won the first set, was up in the second, but the match against Netherlands’ Korie Homan went into a tiebreaker third set.

“The memories of 2008 came back to me and made me realise it’s not over until you’ve hit the last ball.”

Vergeer is now the only wheelchair tennis player to have won four Paralympic Games gold medals in one form of the game. While she says she still loves the sport, she is unsure how much longer she will keep competing.

“I know the day that I will lose will come, I don’t know when and it depends on the other girls I think,” she said.

For now, Vergeer, who heads up her own foundation, does a lot of public speaking and has a degree in Management, Economics and Law is exploring what other options are open to her outside of tennis.

“I realise now that after London we need to do a lot of work to keep people’s attention. As an athlete you can do that by performing well and working with the media to get recognition.” 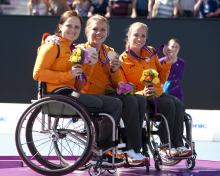