Paralympic champion Oliveira could be face of Rio 2016 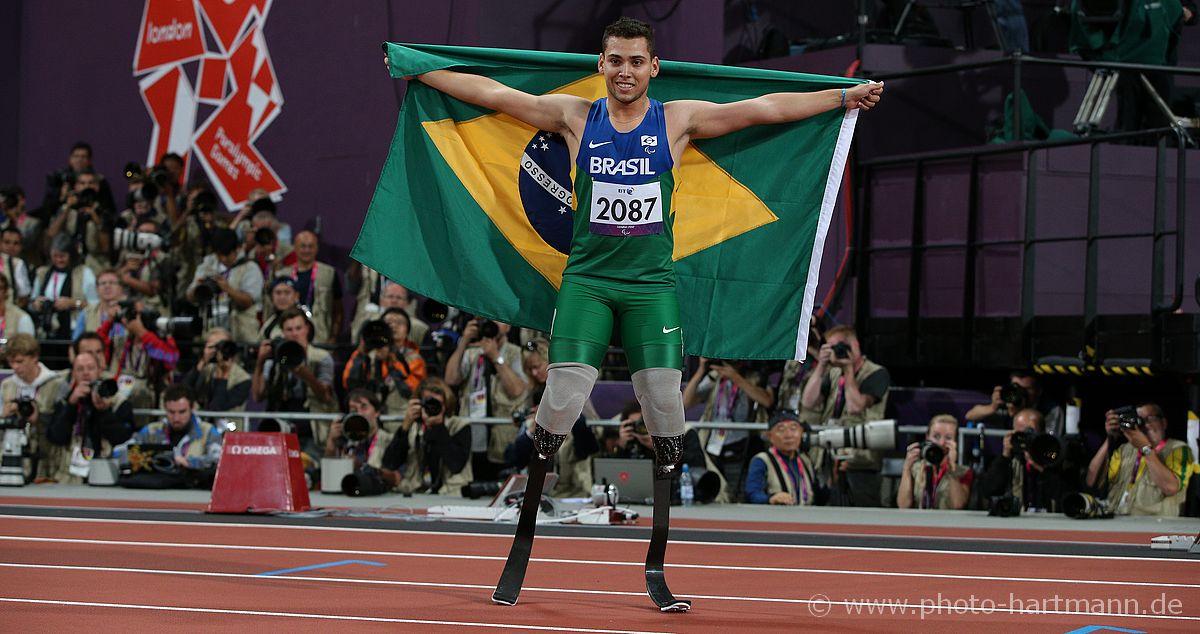 Alan Fonteles Cardoso Oliveira will try to defend his title in front of the Brazilian crowd during the Rio 2016 Paralympic Games.

“For us Brazilian athletes, it will be very special to compete in front of our home crowds. It will motivate us to push the limits even further.”

South America’s first Paralympic Games will be Oliveira’s third, despite the fact he will only be 24 by the time of the Opening Ceremony.

Following his Paralympic debut as a 16-year-old in Beijing – a Games he won a silver medal in as part of Brazil’s T42-46 4x100m relay team – he propelled himself onto the world stage in London.

In the men’s 200m T44 final on 2 September, the world 100m bronze medallist put in a sensational last 60m to beat Pistorius to the line and become the first athlete to beat him over the distance.

He is now in training not only for next IPC Athletics World Championships, but also for Rio 2016.

Oliveira will be one of around 1,100 athletes competing at the World Championships next year in July in Lyon, France.

This week he spoke to over 500 delegates attending the London 2012 debrief in Rio, sharing his excitement for the next summer Games.

Oliveira said: “It is the best possible scenario to compete at a home Games in front of the Brazilian crowd. I know I’ll have lots of support. This will push me even harder to work towards even better results than I achieved in London.

“For us Brazilian athletes, it will be very special to compete in front of our home crowds. It will motivate us to push the limits even further.”

Having beaten the most famous Paralympian on the planet in London, the 20-year-old sprinter has seen his popularity in his home country sky rocket.

During the Games, his victory knocked football off the back pages in Brazil, whilst this week international TV crews were desperate to interview the man who is likely to be the face of Rio 2016.

“My life has changed a lot since London,” said Oliveira, who is enjoying his new found position as a role model for future generations.

“It’s good now to be recognised by the public, and to recognised for creating a moment of joy for the Brazilian population. At the same time it gives me the greater will to pursue achievements in Rio.

“I’ll be delighted to have my name associated with the Rio Games. I am looking forward to promoting the Games and ensuring they are a great Games where the best athletes in the world compete.

Oliveira, along with visually impaired sprinter Terezinha Guilhermina, football 5-a-side star Jefferson da Conceicao Goncalves and swimmers Daniel Dias and Andre Brasil all have the potential to be faces of Rio 2016 and create a Paralympic legacy in their country.

“This is a very special time for Paralympic sport in Brazil,” Oliveira said.

“I think the work all the Brazilian Paralympic Committee has been doing with athletes will mean we have great expectations for the Rio 2016 Games.”