Joze Flere heads to the IPC Athletics European Championships as the one to beat in the Discus F51-53 event as the world-record holder. 22 Jun 2012
Imagen 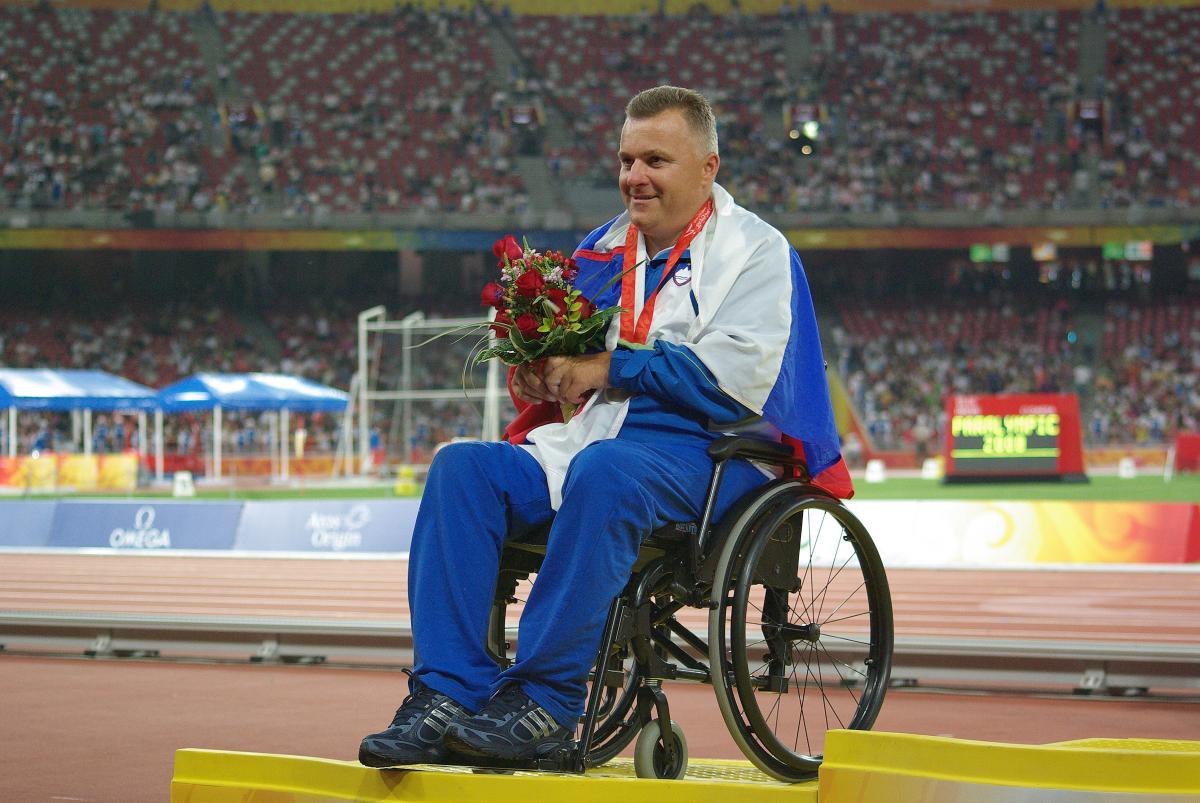 Joze Flere from Slovenia broke the world record in the Discus F51 for the first time at the Beijing 2008 Paralympic Games.

“I want to tell people that if somebody becomes a disabled person, they need to think how to get motivation after. In sport, I found my motivation for living.”

Slovenia’s world-record holder in the Discus F51, Joze Flere, arrived in Stadskanaal, the Netherlands on Friday (22 June) nerveless and ready to go.

The 44-year-old is ready to show the rest of his continent why he is No. 1 in the world in his event when the 2012 International Paralympic Committee (IPC) European Athletics Championships kick off with the Opening Ceremony on Saturday.

Flere first broke the world record in his class when he won silver at the Beijing 2008 Paralympic Games with a mark of 10.99m in an event that combined the F32 and F51 classes. He has broken his own record several times since then, most recently setting a new top distance of 11.98m in Zagreb, Croatia on 6 May of this year.

He said his biggest opponent in Stadskanaal will be himself and the expectations riding on his shoulders heading into the London 2012 Paralympic Games.

Flere has been a quadriplegic since he was injured in a car accident 10 years ago, back when he worked out in the forests cutting wood and building roofs for civilians.

He used to enjoy lifting weights at the gym – and could lift up to 300kg – but he transitioned to Athletics followed his accident.

“I want to tell people that if somebody becomes a disabled person, they need to think how to get motivation after,” Flere said. “In sport, I found my motivation for living.”

Flere competes in the field class for athletes with the lowest functional ability and trains every day aside from Sundays. In his event, because of his classification, he is allowed to use a suitable glue substance on his hands to obtain a better grip on the disc.

“Sometimes, I want to throw and it doesn’t release,” Flere chuckled. “I am still holding it. But for me, it’s not so funny.”

Croatia’s Miroslav Matic, Ukraine’s Dmytro Balashev and the Czech Republic’s Miroslav Matic will all challenge Flere for the Discus F51-53 title in Stadskanaal at 11:00 on the first day of competition on Sunday.

Flere will be one of the three Slovenians and one of the 33 world-record holders competing at the Championships, which run through 28 June.

Joze Flere from Slovenia will try to transform his silver medal from Beijing 2008 into a gold one during the London 2012 Paralympic Games.