Weldon returns to Canada to inspire her own children 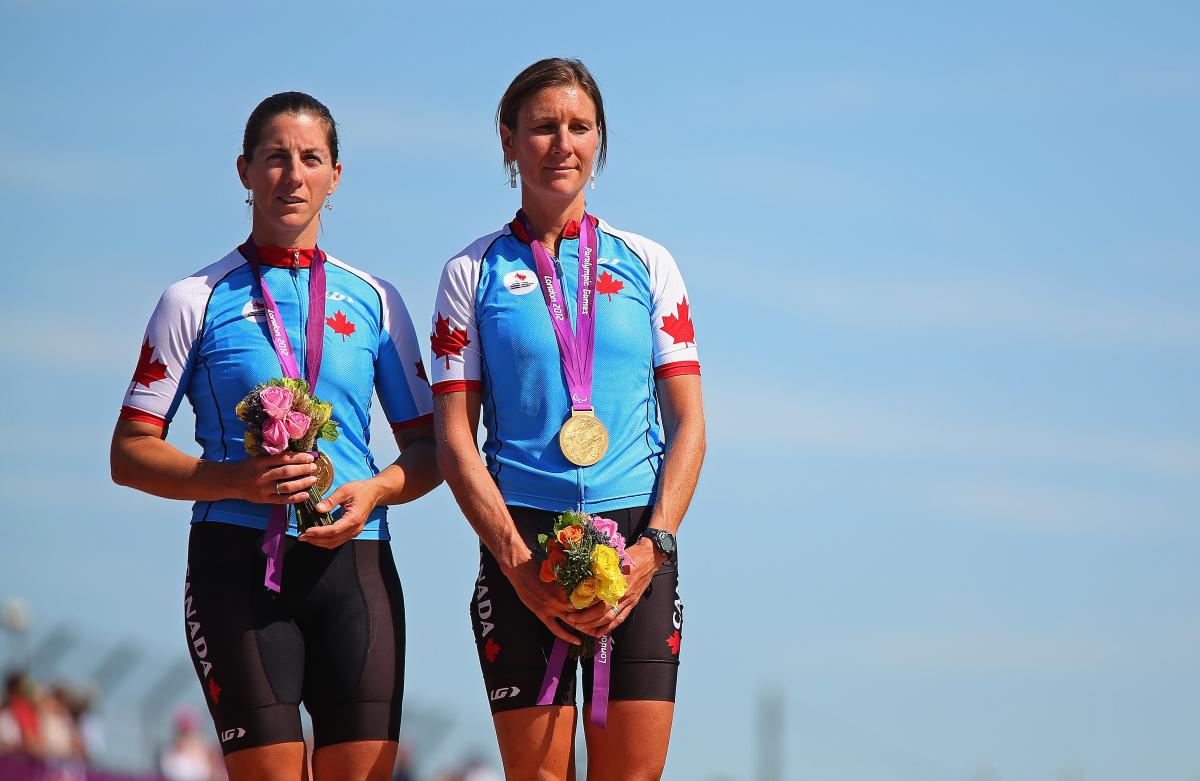 Robbi Weldon and Lynne Bessette of Canada celebrate winning gold in the women's individual B road race on Day 10 of the London 2012 Paralympic Games.

“I think they love to have a mom that is racing at a World Cup level.”

Home, whether it’s the influence of such in her career or personal life, is central to Robbi Weldon.

“I am very proud to wear the Canadian jersey,” Weldon said. “Canada is well respected and looked up to in terms of not only sport, but our nation as a leading country in the world. People see the maple leaf on our jerseys and recognise us.”

“It is not too often that we have World Cups in Canada. Baie-Comeau has committed the last four years to hosting two World Championships and two World Cups. It is an incredible cycling community that is very supportive of the race. It feels very European – they close the entire downtown and the race course goes through the residential area. It’s a community effort.”

Competing in front of her family

As excited as the 37-year-old Weldon is for the upcoming opportunity to compete in her home country, the next two events may be even more highly anticipated by her three children, who will accompany their mother to the competitions.

“My three children are going to come with me to Matane and Baie-Comeau, and they’re excited to see the races,” Weldon said. “They’ve met many of my Canadian teammates in the past, along with athletes from other international teams. They are really inspired by and look up to many of the athletes.”

While Weldon’s career often takes her across the globe, so, too, have her children had the occasion to experience the different countries and cultures of the world. She feels the para-sport environment of has set a great example for children to emulate.

“I think they love to have a mom that is racing at a World Cup level,” Weldon said.

“My children have benefited greatly from my lifestyle of physical activity and being healthy. That also makes them good little mentors for their peers. They’re very proud of their mom and they’ve learned so much traveling around the world with me, meeting para-athletes that are competing at an elite level and are so inspirational.”

A familiar course that’s been good to her

When Weldon takes to the course in Matane, it will mark her third event competing in tandem with new partner Emilie Roy, an accomplished cyclist in her own right.

The duo has had great success through the first two World Cups of the 2013 season and Roy has spent a significant amount of time training with Weldon in Thunder Bay.

“We’ve had a good segment of training between the second World Cup leading into Matane,” Weldon said.

“Emilie and I have great chemistry on and off the bike. She has come up to Thunder Bay twice this summer for training. With me being legally blind, for six months out of the year, I’m just on the trainer in my home. Emilie knows how important it is for me to be able to experience being outside and on the tandem. She has really taken the extra steps to make sure we’re on the tandem as much as possible.”

Weldon is confident that the combination of a rigorous training routine and her years of experience on the Baie-Comeau course will translate into success for her and Roy at the World Championships.

“Baie-Comeau has been very good to me in the past and I’ve had wonderful successes there each year,” Weldon said. “It’s an incredibly challenging course – very hilly – but that’s where our strengths are, in the hills. Emilie and I are very powerful on the bike and it will show on that type of course.

“We’re very, very fortunate to have careers in cycling. Not too many people have this opportunity and we really appreciate what we do for Cycling Canada.”