Australia qualified a boat in the LTA mixed coxed four for the first time, while China dominated the Regatta. 25 Apr 2016
Imagen 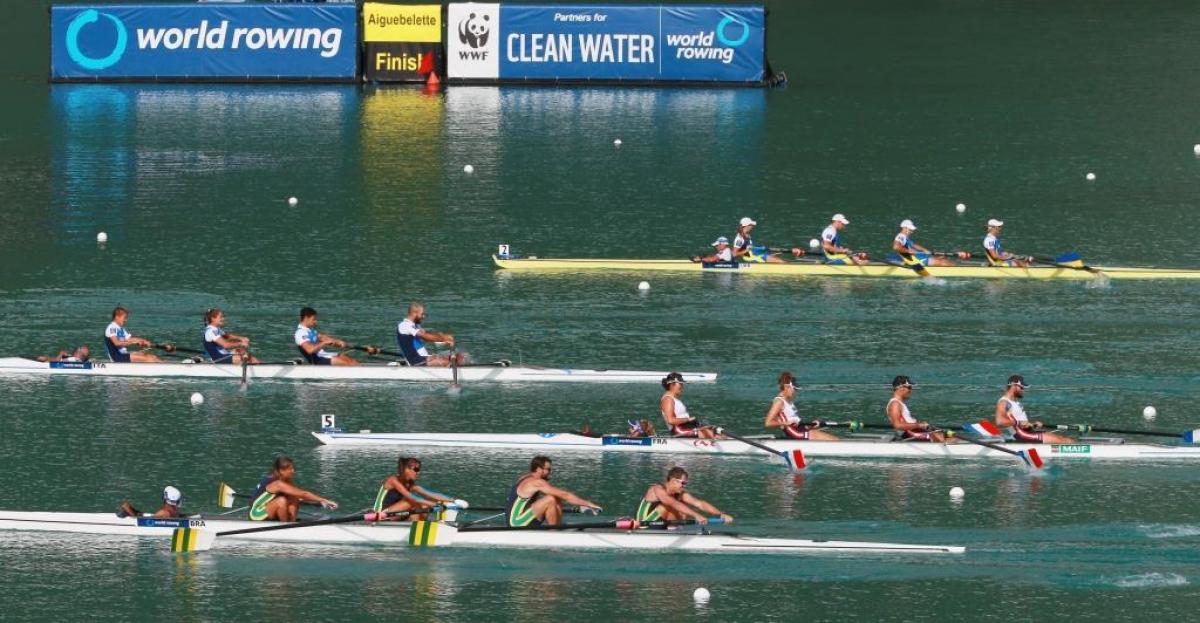 “It’s the first time Australia has qualified this boat for the Paralympic Games and it has been a massive team effort during the last Paralympic cycle.”

Australia’s legs, trunk and arms mixed coxed four (LTAMix4+) made history on Saturday (23 April) in Italy where they secured victory in the 2016 Final Paralympic Qualification Regatta, and in turn qualified the boat class for the Rio 2016 Paralympic Games. This is the first time Australia will be represented in that boat class at the Games.

The Paralympic Qualification Regatta was the last opportunity for nations to qualify for Rio 2016, as the top two boats from each of the four classes obtained spots.

In great conditions in Gavirate, with a very slight tail breeze, the Australian crew got out to a good start and was in front by the 500m mark. Burnand urged her crew to start their run for the line early, and with China hot on their heels, Australia crossed the line first, by half a second (3:26:46 to China’s 3:27:00), to book a spot in Rio de Janeiro.

McGrath said: “From taking part in the LTA mixed double sculls in 2014, it has been fantastic to have been involved in the development of the LTA category and qualifying the LTAMix4+ for the 2016 Rio Paralympic Games. It makes it even more special that this is the first time Australia has qualified this boat for the Paralympic Games.”

Murdoch added: “It’s the first time Australia has qualified this boat for the Paralympic Games and it has been a massive team effort during the last Paralympic cycle. The support from Rowing Australia, the State Institutes and Academies of Sport, State Associations, coaches, clubs, friends, family and other athletes have really ensured this sport class has grown.”

Rowing Australia’s General Manager of Sport, Jaime Fernandez said: “The athletes are of course to be congratulated first and foremost, while I would also like to thank Gordon Marcks and Tara Huntly in Rowing Australia’s para-rowing department for their hard work along with the support and efforts of the states and clubs across the country that have made us the current number one para-rowing nation in the world.”

In the end, it was China who dominated the Regatta, qualifying a boat in all four classes. Lili Wang (5:50:06) just beat out South Korea’s Sejeong Kim (5:50:66) for the win in the ASW1x. It was a different story in the men’s equivalent, as Cheng Huang had a convincing win, finishing in 4:55:91, well ahead of South Korea’s Jun-ha Park by about five seconds.

In the TAMix2x, China’s crew of Shuang Liu and Tianming Fei crossed the finish line in 4:11:70, ahead of Russia’s Svetlana Nuzhdina and Vasily Feoktistov (4:19:59).

Complete results from the 2016 Final Paralympic Qualification Regatta can be found on World Rowing’s website.