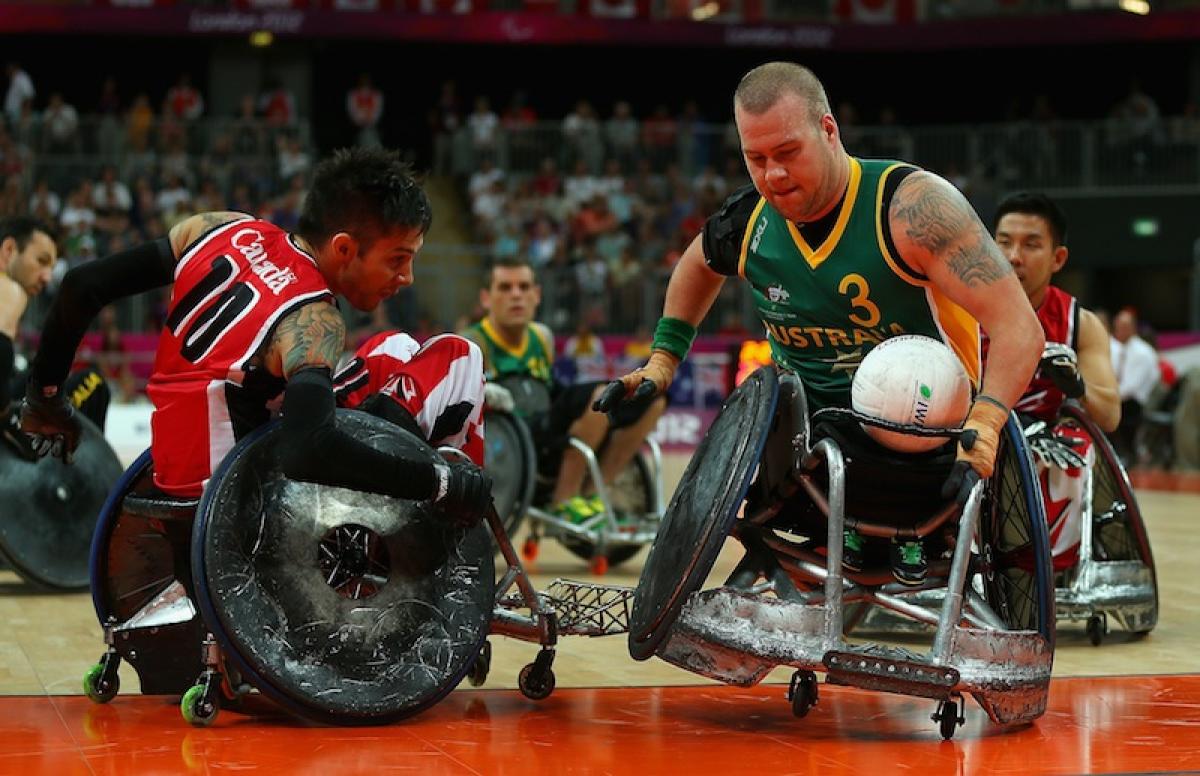 Australia's Ryley Batt has arguably been deemed the top wheelchair rugby player in the world and led his team to gold at London 2012.

“It’s a great feeling and hopefully it won’t be too long until Australia wins the gold medal again.”

Australia took gold in the wheelchair rugby at the London 2012 Paralympic Games with a dominating 66-51 victory against Canada at the Basketball Arena.

The Australians always looked in control and at half time had a 13-point advantage following two successful first half periods.

The third and fourth quarter were also both won by the Australians, ensuring they won all 20 quarters they played in London.

Ryley Batt ended his impressive tournament with 37 more points to take his tally to a remarkable 161 in the five matches he played. Chris Bond added 15 points to top off a successful debut Paralympics.

Early mistakes from a number of experienced Canadian players didn’t help their cause, with Batt and Bond continuing their brilliant partnership that was present throughout the competition.

Naz Erdem finally won a Paralympic final at his third attempt and understands how important the start was for his side.

“It was absolutely crucial for us to get the really good start that we did,” Erdem said.

“It takes any pressure off of us and puts it all onto the opposition.

“It’s a great feeling and hopefully it won’t be too long until Australia wins the gold medal again.”

Kevin Orr, the Canadian coach, paid credit to Australia after their performance in the final.

“It’s disappointing to not win, but the better team won on the day,” Orr said.

“We came here with the intention to win gold, but we haven’t done that.

“I’m obviously delighted to win a silver medal, but we haven’t made our goal. It’s a hard-fought game and I’m really proud of my guys' performances during the competition."

USA took the bronze medal following a relatively comfortable encounter against Japan, in which they came out winning 53-43.

The Americans started the brighter of the two sides, but moments of magic from Japan’s Daisuke Ikesaki and Kazuhiko Kanno kept the Asians in the match.

The Japanese had led 10-9 with Ikesaki intercepting a loose pass by USA’s Derrick Helton.

However, consistent great play from the Americans forced errors by Japan, which gave the USA a lead of 24-21 at half time.

The USA came out stronger after the break, winning the third quarter 15-10 to increase their lead to eight points.

The final quarter was a similar story, with the USA continuing to keep hold of their advantage.

USA captain Will Groulx was disappointed to not be in the gold medal match, but the courage to return after the disappointing semi-final defeat to Canada pleased him.

“We went back, we regrouped and we showed that we all have hearts of a champion. Today we fought hard against a team that really brought the game to us,” Groulx said.

“We have such a phenomenal team and every player brings something special.

“Without a doubt we came into the tournament with the intention to be on top of the podium. We stumbled. You can guarantee that the USA wheelchair rugby team will come back strong from this.”

Shin Nakazato added five points to Japan’s tally and believes the lack of options punished them against the USA.

“They have two or three line-ups, while we only really have one which is the main reason we lost,” Kakazato said.

“The USA also have three coaches together with them, we only have one. They have more equipment and more support. This makes a big difference.”