The IPC Governing Board attended a ceremony at the Barcelona City Hall, where an adapted version of the 1992 Paralympic emblem was presented. 19 May 2017
Imagen 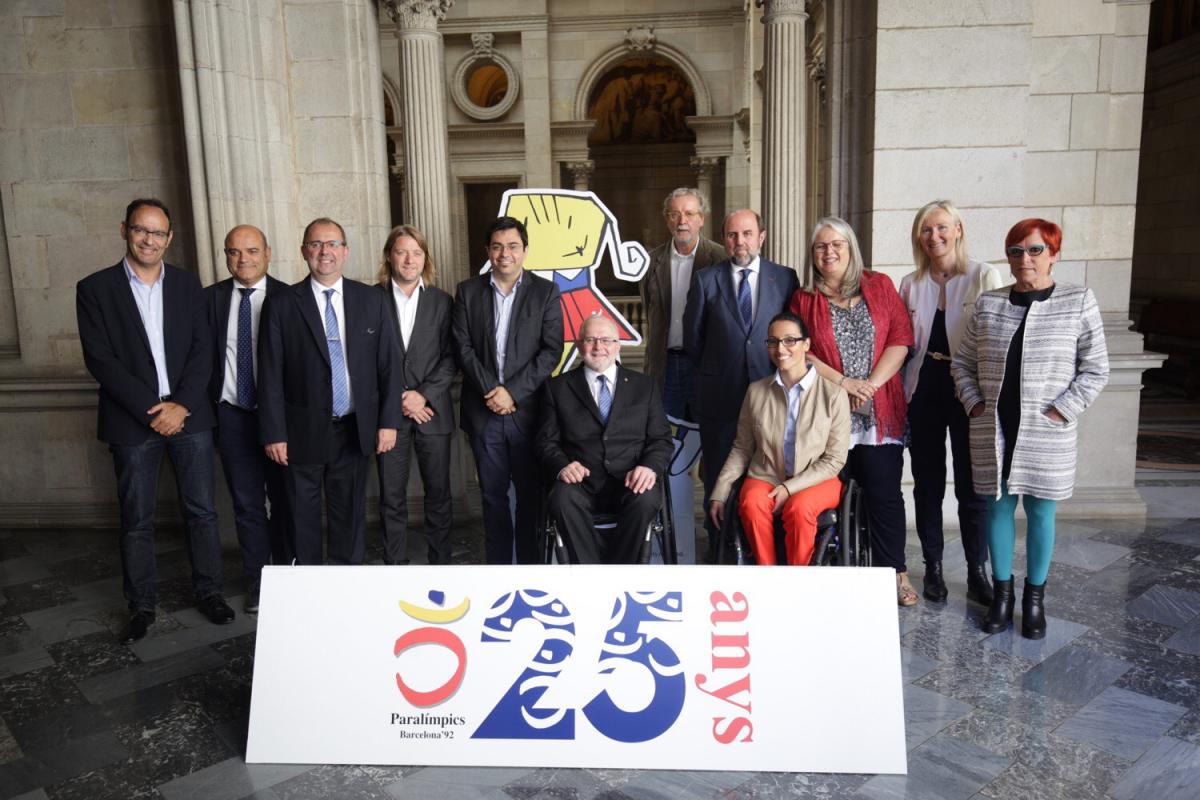 Logo for the 25th anniversary of the Barcelona 1992 Paralympic Games.

Barcelona started celebrations for the 25th anniversary of the 1992 Paralympic Games with a special ceremony held at the City Hall on Friday (19 May), where an adapted version of the Games emblem to commemorate the landmark was presented.

The International Paralympic Committee (IPC) President Sir Philip Craven attended the event together with members of IPC Governing Board, three of whom competed at the Games 25 years ago. They were joined by representatives of Spanish and Catalan national and sporting authorities, 12 Spanish Paralympians who took part in the Games and representatives of the ONCE Foundation.

“Barcelona 92 was the Paralympic Games that acted as a catalyst to the Paralympic Movement’s growth. They changed the Movement forever and many of the IPC Governing Board have outstanding memories of what took place here either as an athlete, administrator or spectator. It’s wonderful to be back in this great city celebrating the 25th anniversary,” said IPC President Sir Philip Craven.

“The Games were first class in so many areas. The venues were packed full of passionate sports fans, there was live TV coverage for the first time, the sport and organisation was fantastic, and hosting the Paralympics led to significant improvements in accessibility which have continued to this day.

“The Olympic and Paralympic Games transformed Barcelona. With the construction of the Village and the Olympic Port, the city centre opened to the sea. Today the city is a hugely popular tourist destination and a global blueprint for how a city can improve it accessibility for all,” he added.

The Barcelona 92 Paralympic Games attracted 3,001 athletes from 83 countries who competed in 431 medal events across 15 sports. The Opening Ceremony was attended by 65,000 spectators including Queen Sofia of Spain and Mayor Pasqual Maragall, who was highly supportive of the Games.

“The support of the then-IOC President Juan Antonio Samaranch was also crucial to the success of the Barcelona 92 Paralympics and, from that time on, the IOC and IPC started to develop a relationship that continues and benefits both parties to this day.”

Sir Philip said that each time he had visited Barcelona since the Closing Ceremony of the Games on 14 September 1992, he was impressed by continued accessibility improvements in the city.

“When a city wins the right to stage the Games, it cannot make absolutely everything accessible in the seven years it has to plan and prepare for the Opening Ceremony,” he said. “Barcelona had a good go however, but what has struck me the most is that accessibility improvements have continued ever since the Games finished.

“When I came here in 2002, I didn’t realise until leaving just how easy it had been for me to get around in my wheelchair. Accessibility is at its best when you do not notice it and that’s what Barcelona now provides.

“Likewise, all members of the IPC Governing Board meeting in Barcelona this week have been blown away at the city’s infrastructure and the legacy the 1992 Games left for this city.

“Barcelona can now be regarded as one of the most accessible cities in the world and this is a direct result of the fantastic Games we enjoyed here back in 1992.”